A recent cover of the Economist showed a picture of a few small uninhabited islands and asks "Could China and Japan really go to war over these?" The islands, every news article and blog post will tell you, are "called Senkaku in Japan and Diaoyu in China." What the reports all fail to mention is that the name of the main island in the chain is almost identical: 魚釣島 in Japanese and 釣魚島 in Chinese. The exact same characters with the first two switched, and they even mean more or less the same thing: "fishing island." This is an excellent metaphor for the "conflict" in general, a situation in which small disagreements between the two sides are emphasized, common interests are overlooked, and the Anglophone media piles on because it makes for a compelling story. 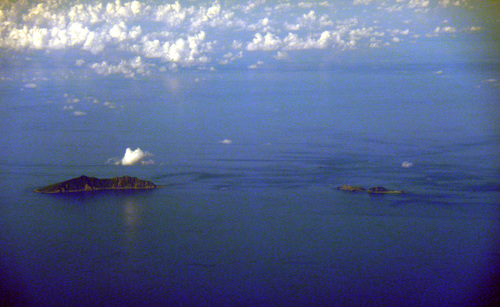 There are many good reasons to believe that this conflict will not escalate into a war, or at least, not a wide-ranging one with disastrous consequences:

First, and most simply, there will not be a war because it would be economically ruinous to both sides. "China accounted for 21 percent of Japan's exports and imports in 2011," according to the Wall Street Journal, and the total value of annual trade between Japan and China was $345 billion. By contrast, the estimated value of the annual production of the Chunxiao gas field, which is often cited as one of the reasons for the conflict, is a mere $1.1 billion (based on average 2011 wellhead prices). That is just under a third of one percent of annual trade between the two countries (see graph). 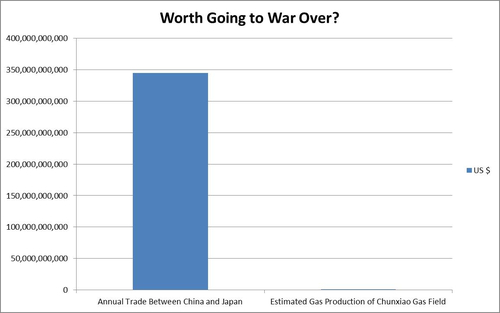 Second, even if it did come to blows, there is no reason to believe that it would escalate to a full-scale war, much less a nuclear conflict. There have been lots of "conflicts" and "crises" over uninhabited islands, including the Perejil Island, Imia and Kardak, and the Picton, Lennox and Nueva islands, but none ever resulted in anything like a full-scale war. Even the Falklands war hardly resulted in disaster for the region.

Third, not only does Japan still operate under a pacifist constitution, but China actually has a record of peacefully settling border disputes by agreeing to compromises. Even when border disputes precipitated a 32-day war with India in 1962 and a 28-day war with Vietnam in 1979, these have hardly led to regional instability or other serious consequences. 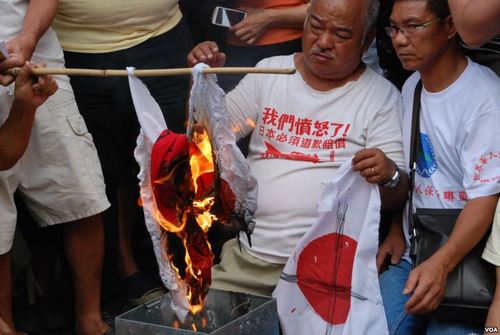 Considering all this, why is the media full of bluster, vitriol and dire warnings? As I have pointed out before, all foreign correspondents in China are based in major cities and (generally through no fault of their own) have a difficult time reporting outside of them. Foreign reporters and their photographers were there to witness the anti-Japanese protests first hand and get lots of compelling pictures. On the other hand, they largely miss the tens of thousands of protests against land expropriation in China every year that a co-author and I examine in a forthcoming paper. By comparison, anti-Japanese protests are an easily handled blip and, at any rate, are partially stage-managed by the government. Indeed, the Shanghai police have successfully prevented significant damage of the Japanese consulate there, simply because they do not want to pick up the tab for repairs. For its part, the Japanese government bought the islands to prevent nationalists from "seizing control of the islands, a move which would be certain to further inflame nationalistic sentiment in China." Neither sounds like the action of a country ready to go to war.