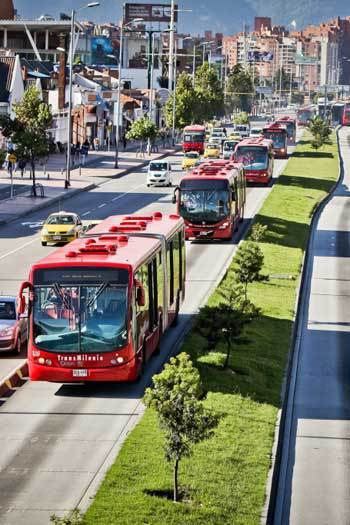 "The Paris climate agreement didn't create the commitments we need to limit global warming to a 2 degree Celsius increase," said Laura Tuck, vice president for sustainable development at the World Bank at Transforming Transportation, a conference in Washington, D.C. "But it was an awesome achievement. All 190 countries -- everybody -- are in." All countries are now focused on how to achieve a net-zero carbon world by 2050. For Andrew Steer, president of the World Resource Institute (WRI), the success of the Paris climate meeting, and the long-term movement towards the ambitious 2050 goals, signifies the "renaissance of moral imperative around the world."

Tuck and Steer called for undertaking "disruptive approaches" to reduce greenhouse gas emissions (GHGs) from the transportation sector, which accounts for the second largest share of energy-related emissions.

On the goods side, this involves shifting freight transportation from roads to rails and waterways. "Freight logistics for transporting goods needs to be greener." Suresh Prabhu, minister of railways for India, concurred, explaining how India, with the World Bank's help, is investing billions in a new, renewable energy-powered regional rail network to better facilitate the movement of goods.

And urban transportation was described as critical to achieving a sustainable future. This is because more than half of the world's population -- who create 80 percent of global GDP, consume 70 percent of the world's energy, and expend around the same percentage of its GHGs -- are found in cities, and they can either get around in cars on in a more sustainable manner.

While many of the world's largest cities are busy retrofitting themselves with more sustainable transportation networks, it may not be too late to do things the right way the first time around with the world's exploding second-tier cities. "We need to get to those second-tier cities that are growing fast. We need to get to them early and get them to invest in 'live, work, play' environments," said Tuck.

A key part of this strategy in developing countries is to expand street-level connectivity; invest more in public transportation, like bus rapid transit (BRT), subways, and light rail; and create a regulatory environment that enables shared transportation, including mobility on demand services like Uber and Lyft and shared car and bike services.

In addition to their many environmental benefits, these sustainable sources of urban transportation can be major job creators. Just to use one example, Steer said in Bogota, Colombia, some 40,000 workers are directly involved in keeping their city's BRT system working, with another 55,000 indirectly involved. As Dario Rais Lopes, national secretary of transport and urban mobility for Brazil explained, his government is now forcing all of its 5,600 cities with a population of more than 20,000 to come up with a plan for moving to a BRT system, so imagine the number of jobs there. And then think about all of the jobs related to constructing sustainable transportation infrastructure. In an example from the U.S., complete streets, which provide equally as safe access for pedestrians, bicyclists, and vehicles, were found to create far more jobs than traditional road construction project.

Copenhagen, Denmark was held up as a model of disruption in urban transportation. Morten Kabell, mayor of technical and government affairs for the city, explained how the city transformed itself from a car-centric city 40 years ago to the Copenhagen of today, where more than 50 percent of the population commutes by bicycle, even from the suburbs, while just 20 percent use public transportation, and the rest drive. Copenhagen has its priorities straight: when snow storms hit, the city actually plows the bike lanes first, before streets for cars. But Kabell added that "Copenhageners aren't so idealistic. They bike because it's the cheapest, fastest, and easiest way to get around." And the city has worked hard for decades to disrupt the rein of cars. 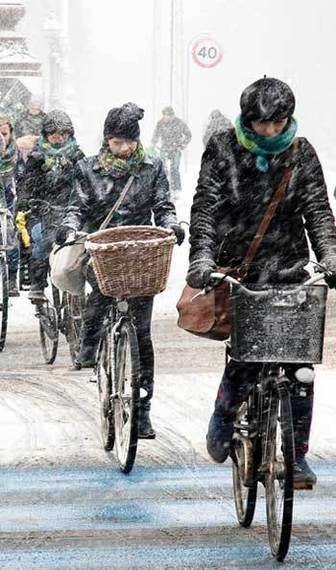 Kabell explained that Copenhagen, one of the world's richest cities, "had to change in order to set this example. Only a few decades ago, we were both totally car-dependent and on the verge of bankruptcy." City leadership believes going green is what saved the city from financial ruin and ensures its continued success. Today, instead of allowing big box stores only accessible by car, they enable small, local stores for bicyclists. And now Copenhagen is only upping the ante: they are investing $1 billion in wind turbines in the city, with the goal of being totally carbon neutral by 2025.

And if Copenhagen's well-plowed, wintry bike lanes sound disruptive, how about "taxibots," which are autonomous vehicles shared by one of more riders at the same time. Cities could begin to get serious about taxibots, said Jose Viegas, the head of the International Transport Forum (ITF), which just did an intriguing modeling exercise on what these vehicles could mean for Lisbon, Portugal. ITF thinks taxibots would reduce overall car use, eliminate the vast majority of parking spaces, but could also increase total vehicle miles traveled. 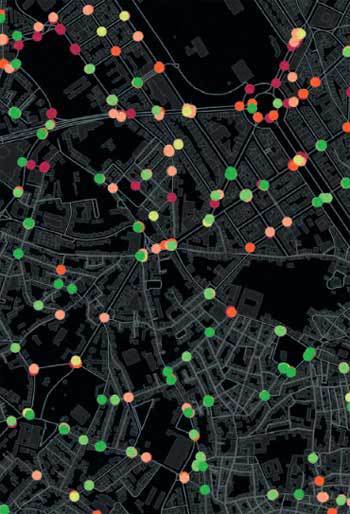 Still, to put all of this in perspective, Ani Dasgupta, director, WRI Ross Center for Sustainable Cities at WRI, said the vast majority of the world's transportation spending is still on car-based infrastructure. He said with increased global pressure, national energy policymakers now must really think again before approving a new coal-fired power plant. Dasgupta believes the world will have really turned the corner when national leaders feel the same pressure when they want to build a new highway. "But we aren't there yet."