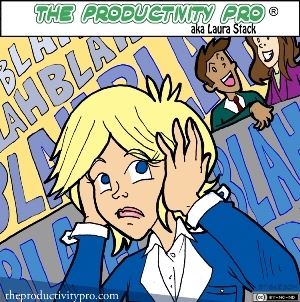 Many workplaces today feature more open spaces and smaller, and often shared, workstations. These open floor plans have become "the new normal" in many organizations. Some people speak of them positively, citing the ability to collaborate with coworkers and the creative feeling they can inspire. However, I hear just as many complaints about the walk-in visitors, interruptions and noise level negatively affecting workplace satisfaction, productivity and speech privacy.

The brain isn't a marvel of infinite capacity; we are, after all, only human, with all the limitations that implies. One limitation lies in our capacity to process what's happening in the world around us, everything from the room temperature to the quality of the lighting. When you're trying to focus on a task and overhear a hallway conversation, even when you're not meaning to, you lose track of what you were doing.

According to research by Gloria Mark, a professor of informatics at UC Irvine, office workers are interrupted by themselves or others every three minutes. Once you're off track, it takes up to 23 minutes to get back to what you were doing before the interruption.

In a recent study presented to the International Congress of Noise as a Public Health, researchers found that on average employees wasted 21.5 minutes per day due to conversational distractions, making speech the number one cause of reduced productivity -- or roughly 4 percent of an average 8-hour day. If you have 100 employees at an average of $50,000 each, you're losing $200,000 a year in lost productivity. An additional 2014 Steelcase/Ipsos study found that employees lost as much as 86 minutes per day due to noise distractions!

Most people just accept it and learn to adapt -- somewhat. They do fairly well by adopting actions that "distract the distractions," mainly by listening to music or simply by wearing noise-reducing headphones. But just because they've adapted doesn't mean they achieve peak performance on a regular basis.

Even though open office environments can seem noisy, a quiet, library-like working environment won't create a productive workspace either. The low level of background noise in a quiet environment allows noise distractions to contrast more dramatically with the quiet, causing a greater distraction than if the space had a higher level of background noise. For example, think about being in a library. If someone whispers, you tune right into it. If your workplace is too quiet, you'll be more distracted by conversations, because you'll be able to hear a proverbial pin drop.

Lacking volume controls for your coworkers (wouldn't that be great!), you have little choice but to try to reduce noise and create freedom from conversational distractions. Chat with your team about the some ways to accomplish this in your office.

Use a signal. If several people in your department are having problems with drop-in visitors, agree on a signal that communicates to others, "Please don't interrupt me unless it's an emergency." A manager I worked with at Coca-Cola had an "open-door" policy. He wanted his employees to feel comfortable talking to him about anything, anytime. Unfortunately, he rarely could find time to get his work done. At his next staff meeting, he explained the problem he was having. He said that when he had a deadline, he would put on his red Coca-Cola baseball cap. His door would remain open in case there was an emergency, but he would prefer employees didn't interrupt him during those times. He reported it worked like a charm.

Get together with your department and agree on a signal everyone will use consistently. Installing curtains across the cubicle door? Turning your nameplate around? Wearing orange armbands? Partially closing the door? One group I worked with found that coworkers respected the signal about 80 percent of the time. When I questioned the people who said others weren't respecting their signals, it turns out they never took down their signals. They were never available to their coworkers, so their coworkers simply ignored their signals. If you use this system, make sure you don't abuse it.

Increase background noise to mask the sound. What? Increasing background noise (called sound masking) seems counter-intuitive! Think of it like this. While I'm standing at the kitchen sink with the water running, and my son starts talking to me from across the house, I can tell that he's talking to me, but I can't make out what he's saying. It's not that he's talking less loudly; the water is actually "masking" the sound of his voice or covering it up. Adding sound makes speech less intelligible. When you can't understand what someone is saying, their words are less distracting; in fact, you probably don't even notice them.

Sound Masking systems, such as the QtPro system by Cambridge Sound Management, mimics this phenomenon on a much more sophisticated and effective scale. By adding a continuous, low-level ambient sound to an environment (that sounds similar to the sound of airflow), excess speech noise in the environment is masked, making it less distracting. Systems like QtPro make it so you can comfortably have a conversation with someone at the next cube without being concerned it will be heard by someone 40 feet away (and vice versa).

Consider the physical layout of your office. Does your desk face a door or a hallway? Humans are curious beings. When someone walks by, it is our nature to look up to see who just passed. If that person catches your eye, you might involuntarily smile. Not wanting to be rude, the other person smiles back and awkwardly says, "Hi, how are you?" and enters your office, because it would seem rude to not get a real answer (even though "How are you" isn't actually a question). Congratulations, you just bought yourself an easy ten-minute interruption. One solution is to rotate your desk or change the layout of your cubicle so that your back is facing the door. If someone walks by and sees that you are busy, they are less likely to interrupt you (but not always). As an added benefit, you focus longer on the work in front of you. If you can't rotate your desk completely around, try at least to work sideways and use a computer screen or cabinet to block your peripheral view to the corridor.

Seek solitude. Rather than just assume the majority should rule, smart office designers and managers provide opportunities for people to find the solitude if they need to work undisturbed. Similarly, workplace architects have begun to recognize the need to provide spaces for both people seeking to be around others and those seeking to get away from them.

A practical solution involves providing small-group workrooms where those seeking concentration and/or teams of three or fewer can retreat when necessary. If no such facilities exist, open conference rooms can take their place.

Managers should contemplate how to enable better focus in the workplace, such as installing a sound masking system. As a last resort, take desperate measures...put on your noise-cancelling earphones and listen to music.

© 2015. Laura Stack is a high-energy International Keynote Speaker. Bestselling author of six books. Leading Expert in performance and productivity. Audience favorite for thousands year-after-year. Go-to resource to increase sales. Build teams. Grow customer bases. Nurture leadership. And help people achieve more in less time with more balance (and less stress) than ever before. Fun, dynamic and driven -- and perfect for your next event. Contact her at www.TheProductivityPro.com. Note: Laura Stack is a paid contributor to Cambridge Sound Management