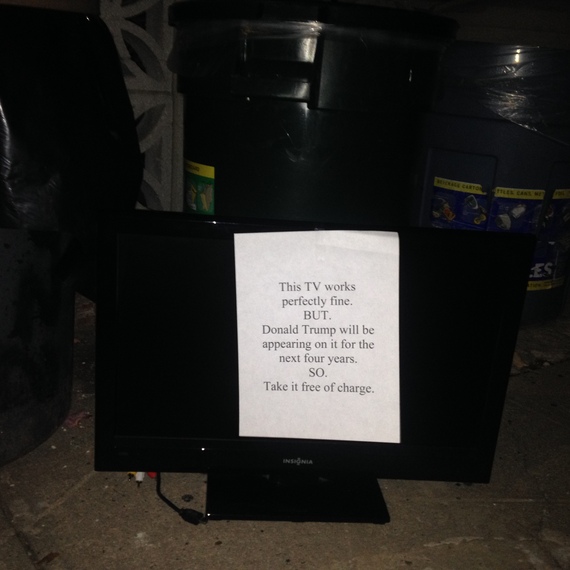 Now that the world is slowly coming to grips with the fact that Donald J. Trump will be our next Commander N. Chief, I have a message for our nation's television salespeople:

"Be afraid. Be very afraid."

If you work on commission, netting a tidy profit for every Samsung, Sharp and LG flat-panel that you ring up at Best Buy or another fine electronics establishment, consider the story of my good friend, Tom Ryan. A Queens, N.Y.-based stand-up comedian, with two David Letterman appearances on his resume, Ryan did with his TV what 40 percent of married couples eventually do with each other.

He got a divorce. And a quickie at that.

"I unhooked it, took it out to the curb and put it in front of the trashcans," he said.

Attached to the TV-turned-garbage artifact was a Ryan-authored sign: "This TV works perfectly fine but Donald Trump will be appearing on it for the next four years so take it free of charge."

A neighbor snapped up the TV, which was just fine with Ryan. When we talked two days after the election, he had already untethered himself from his steady diet of CNN, MSNBC, Bill Maher and C-SPAN. His audio collection, heavy on Miles Davis, Bob Dylan and Leonard Cohen, was providing comfort. He was also reading about ants.

"You get into that world and you get lost in the regular day to day world that we live in. Amazing miracles are happening that we are not even paying attention to," said Ryan, who is halfway through Journey to the Ants, by Pulitzer Prize-winning authors Bert Holldobler and E. O. Wilson.

"I didn't like the fact that my emotions got so tethered to politics," Ryan said. "So I'm reinventing myself as a person. I've already met people who say, 'Did you see what Trump did?' No I didn't. I happily say that."

While Ryan and dozens of other friends I've spoken to are vowing to swear off TV -- even if they don't go to the extreme of ditching the actual set -- grocery stores should also consider a transformation. Specifically, stocking their shelves with extra grilling meats and body lotions.

Prior to the election, in an effort to discover how grocery shopping patterns differed among political party affiliation, consumer technology firm Ibotta examined more than 565 million purchases from nearly 3 million consumers. The firm then compared the data with how each shopper's state voted in the 2012 presidential election.

Red states that in 2012 favored Mitt Romney purchased more "party food," including hot dogs, pie filling, popcorn, meats and grilling supplies than their blue state counterparts, which came out ahead on grooming items such as nail care, sunscreen and body lotions. Blue state shoppers also went for more health-conscious items including meat alternatives, green beans and root vegetables. Considering the number of key states that flipped red for Trump in 2016, America appears to be gearing up for one helluva party. Who cares if we die faster and uglier?

I've self-titled myself a "purple" voter, meaning I go for a mix of red and blue candidates come election time. Yes, I voted for Hillary and Democratic Senator-elect Tammy Duckworth in my home state of Illinois. But in 2014 I also chose Republican Bruce Rauner to govern my state, so anxious was I to rinse Illinois from the stain of former Democratic governor and current Colorado penitentiary inmate Rod Blagojevich. Right now our country needs more purple and less blue and red.

To comfort ourselves, may I suggest we all purchase bountiful supplies of eggs, granola bars and chocolate -- three items the Ibotta survey said red and blue states buy in equal numbers -- on our next grocery runs? Trust me, Trump haters, this is a much better strategy than lathering yourself in Coppertone while painting your nails.

My friend Tom admitted he may come around in a few months and purchase a new television -- a sign of his willingness to go purple. I'm healing a bit faster. In fact, I'm already planning a party and will happily invite Trump supporters to mend fences while feasting on more delicious, Ibotta-surveyed purple foods, including bananas, yogurt and ice cream.

I just hope they don't mind if their food is covered in ants.