At Moore College of Art and Design (Philadelphia) through August 31, 2013

Never have I seen a cellphone camera used more seductively. Ditta Baron Hoeber exploits the inherent limitations of her cellphone lens to achieve tremulous images of a world within arm's reach. In her solo show at Moore College of Art and Design, she amplifies the feeling of breathy spontaneity by leaving visible the little rectangles of tape that hold her photos in place, the numbers she pencils into the margin to index pictures in a series, and by not fussing over whether each photograph lines up perfectly with its neighbor. The photographs are printed on a matte rag paper, conjuring a soft, painterly quality.

A quiet intimacy arises from the intensity with which Hoeber attends to her relationship to space and people immediately surrounding her. In Black Slipper and Proximity she surreptitiously captures the foot and leg, respectively, of the passenger beside her on the train, along with a bit of her own leg, measuring the gap between them. This is the unique space of public transportation: emotionally distant but physically close. These pictures resonate with the subway photographs of Walker Evans, in which he hid a camera in his coat and shot the faces of passengers seated opposite. Evans went to great lengths to achieve his subterfuge, painting his camera's chrome black and shooting between two buttons in his coat, but cellphone cameras have created a new paradigm for secret pictures easily stolen, opening up the possibilities explored by Hoeber. 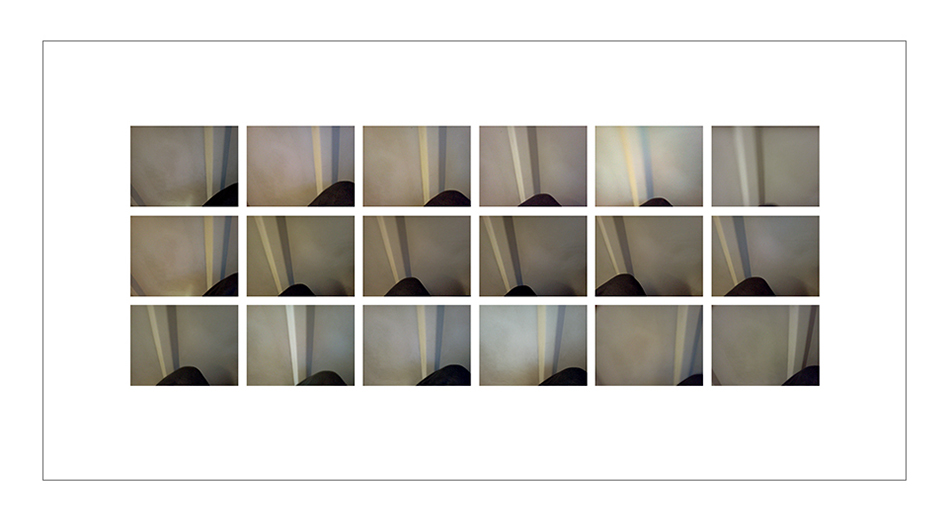 Her gridded geometric abstractions remind me of Ellsworth Kelly's Cite´ (1951) for the way they arrange themselves as a whole, establishing rhythm, pattern, and movement. But she adds something more: the dramatic play of light as a temporal index. In 8 minutes 52 Seconds Hoeber records the early morning light captured by a section of molded plastic: vertical strips of the structure become glowing shafts of energy. Especially poetic is the way this series resembles the movement of a metronome, its hand rocking left and right to mark the seconds.

Hoeber's presence in her images is noteworthy, most often marked by her upper leg or just a knee, always under a black skirt or coat. Her body indicates her "I" in addition to her eye, embedding her physically within these abstractions. Because she wears black, her leg functions as a form and a void, an index for her role as the observing artist into whom reality pours. As exemplified in Triangles, she creates photographs that are both rigorously observed geometries and highly personal records of her living passage through the world.

This review was originally published in Title Magazine on June 7, 2013