Jim Elliott first saw the transformation in his daughter, who was born blind. Frustrated, and teased by other kids at her mainstream school, she threw down her cane, and refused to learn braille, insisting that she could see.

"She struggled with being blind, and when she got to be about nine years old, I got her involved with downhill skiing, and all of a sudden, it was "Erin the skier," and not "Erin the blind kid." It built up her confidence and changed her whole life," said Elliott, 53.

Diving instructor Elliott said the activity has a far milder learning curve than swimming. Students -- ranging from children born with disabilities to veterans with traumatic brain injuries -- experience a kind of weightlessness and freedom, Elliott says.

"It's the only physical activity that has no gravity, so you take people out of wheelchairs and you put them in the water, and it's like they can fly," said Elliott. They start to realize that if they can dive, they can do anything, he added. 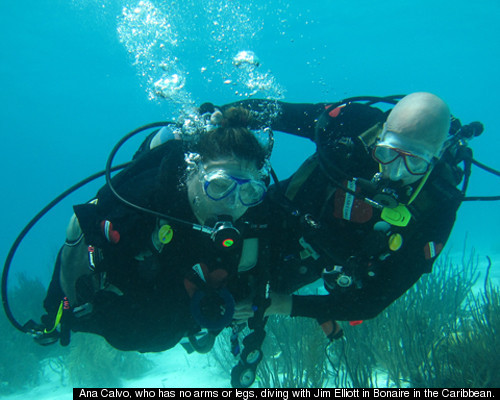 U.S. Marine Corps Sergeant Greg Rodriguez, for example, suffered incomplete paraplegia in a car accident right before he was due to deploy to Iraq. Rodriguez told Chicago T.V. station WGNTV: "Doctors refer to it as [a] traumatic brain injury, but I refer to it as my nightmare."

"At that time in my life I thought that I was useless, you know, good for nothing because I had to depend on everybody," said Rodriguez, 27.

After learning to dive, Rodroguez told Elliott he feels like he can do anything, and now part of the organization.

Diveheart recently received a grant from the Illinois Department of Veterans' Affairs, and is looking for veterans working through injuries, and post-traumatic stress disorder, who want to learn to scuba dive for free. "There's a real need to reach out to these guys and gals and get them in the water and turn their lives around," said Elliott.

Elliott started diving in college in 1976, and became an instructor in the 1980s. After his children grew up and left home, and following a divorce, Elliott decided it was time to pursue his passion, turning his back on a six-figure salary in ad sales. He started teaching people with disabilities to dive in 1997, and launched Diveheart in 2001.

The diving instructor said that unlike many forms of physical therapy -- and skiing -- diving can be very accessible: "The real progress that we see can be done in swimming pools, and there's a pool in every community," said Elliott.