Who says Santa Claus has to be white? Until now, your iPhone's emoji keyboard did.

A new beta release of iOS 8.3, currently available only to software developers, fixes that. It includes the option to change an emoji's skin color, meaning you can finally choose something beyond the pale pink hands and white boys and girls currently available. The human-looking emoji -- including the one for Kris Kringle -- will now have six different skin tones to pick from.

A spokeswoman for Apple confirmed the update to The Huffington Post via email, though an official release date has yet to be announced.

The emoji change has been expected since at least November, when the Unicode Consortium released updated emoji standards that included a skin tone palette. The Consortium sets international rules for text and characters to insure consistency across platforms. Major companies like Apple, Google, Microsoft and IBM use Unicode, which is basically why you're able to send an emoji from your iPhone to a friend's Android device without it displaying as an unreadable character. 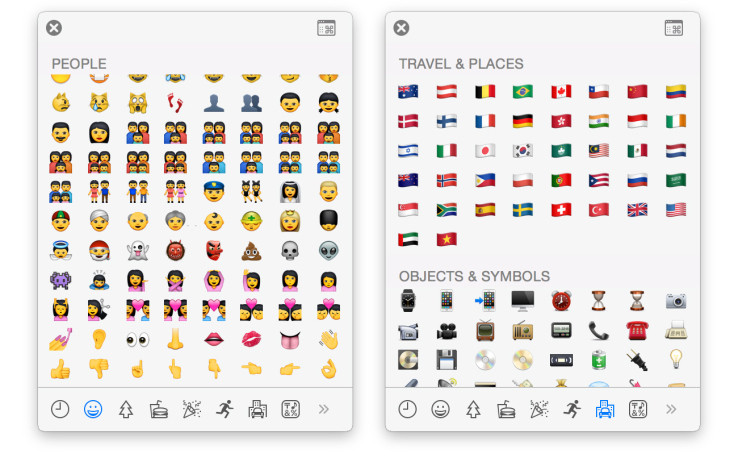 Here's a screenshot of more of the new emoji options.

Some have lauded the move for pushing emoji beyond certain stereotypes, like the default image of a brown man in a turban.

However, there's been some pushback over the yellowish skin tone option:

Don't understand why Asians should be thrilled to use bright yellow emojis. What are we, the 'Bert' race? pic.twitter.com/9eDdSCJf60

Apart from the diverse emoji, there's also a little something extra for Apple nerds. The company has reportedly replaced the old cell phone and wristwatch emoji with an iPhone 6 and Apple Watch, as seen here:

The new diverse emoji are also available in a "pre-release" of the latest Mac OS X version. But unless you're a software developer, you'll have to wait for the final versions to be released.