In the diversity movement for the legal profession, just as in life, actions speak louder than words. So even though diversity and inclusion remains a hot topic in the business world, including for lawyers, it's continually important to spark more - and more innovative - action. That's the goal of a recent report issued by the California Minority Counsel Program - entitled Diversity Action Matters - Innovative Action to Improve Opportunities for Diverse Business Lawyers. 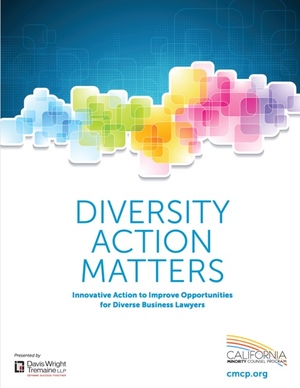 CMCP's slogan declares that "Diversity Matters." And through all it does, CMCP proves that diversity action matters. For over 25 years, the California Minority Counsel Program has been committed to action to improve diversity in the business law community. I was a long time Board member and former co-chair of CMCP. I know the organization is committed to providing attorneys of colors with access and opportunity for business and professional development, and supporting law firms, companies and public agencies with their diversity initiatives.

And I've taken a personal interest in CMCP's mission. For 20 years, I've built a career in three of America's "BigLaw" firms as an immigrant, Vietnamese American, gay lawyer. My path to success as a law firm partner has not always been easy and still remains challenging; I'm an outsider in a world still dominated by insiders. For younger generations coming up after me, I hope the path will become easier. Just like everyone else, diverse lawyers should be empowered to reach their full potential.

We gathered the ideas into the report - which is publicly available on CMCP's website for download or via an online readable version. Some of its ideas suggest new behaviors; others call for new ways to think. Some are timeless in their simplicity; others are more robust and complex. Here are some highlights:

Recruiting and retaining diverse talent is key, and a number of companies provided suggestions on that front:

Professional development is also critical to help lawyers working both in-house and at law firms. Jennifer Ishiguro, Chief Legal Officer of Gateway One Lending & Finance emphasized the need to "Help minority business counsel improve their self-presentation and pitch skills. A key component of this is listening and understanding the needs of the potential or existing client and their business - not just doing a 'hard-sell'." She also saw value in hiring "leadership development coaches to help minority in-house counsel with professional development and advancement."

Another important theme was the need to cultivate future leaders from today's younger generation of lawyers:

Many recommendations focused on helping women lawyers and attorneys of color obtain client business, and ensuring accountability for diversity as a business practice.

I hope people take time to read the full report. While it focused on the legal world, its lessons can be used in all professions and industries. I also hope its suggestions spark even more ideas for tomorrow. . and more action for diversity to truly win.

Jimmy Nguyen is a partner in the national law firm of Davis Wright Tremaine LLP - which sponsored CMCP's Diversity Action Matters report. He previously served on the Board of Directors of the California Minority Counsel Program, and was the organization's co-chair in 2010. In 2015, Jimmy was inducted into CMCP's Diversity Leader Hall of Fame.