NPR's omsbudsman Edward Schumacher-Matos examined diversity at the network over the weekend as the program "Tell Me More" -- which focuses on issues of race and religion -- comes to an end.

NPR announced last month that it is canceling the show, to the consternation of some listeners. Schumacher-Matos wrote on Saturday that he agrees the cancellation is "sorrowful," and that while NPR made the decision for several reasons -- including its small audience -- the network's diversity is something to consider.

He pointed out that just five percent of NPR's member stations' audiences are black and 6 percent are Latino. Those numbers don't reflect the general population of the United States. Meanwhile, 10 percent of NPR's newsroom is black, 7 percent is Asian and 5 percent is Latino. 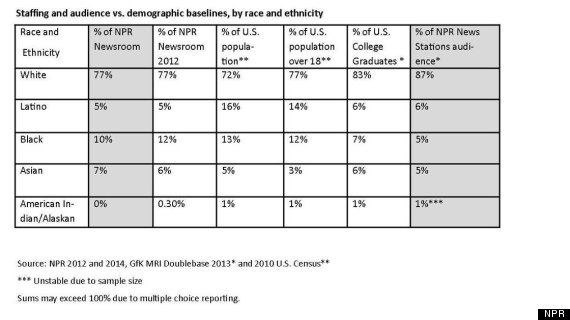 He said he doesn't believe the end of "Tell Me More" will affect the numbers and that the statistics don't tell the whole story, but added that the concerns of minority groups "may get lost in the majority white culture. The shows, should tell us about each other as much as connect to any group." Read Schumacher-Matos' piece in full here.

Improving diversity has been a growing concern for NPR for years. On Monday, the New York Times published its interview with NPR's new president and CEO Jarl Mohn, who spoke about his plans to work on the issue. Mohn was previously the chairman of Southern California Public Radio, where his track record on diversity was one of the reasons he was selected for the new role at NPR.