It was a fine way to mark an anniversary of sorts. This time last year, the Regents of the University of Hawaiʻi (UH) had adopted a sustainability policy. This week they discussed the wisdom of divesting from fossil fuels as well as the need for more leadership in how the university "stewards the resources of the islands and the world for the benefit of all." That discussion took place in a room in the new IT building at Mānoa, packed with people who had responded to the notice of a meeting of the Regents' Budget and Finance Committee and the invitation to the public to testify on the subject of divestment from fossil fuels.

Committee Chair Jan Sullivan observed that the Regents' fiduciary responsibility to ensure an adequate return on their investment portfolio came with an obligation to take into consideration any damage to society tied to those investments. Sullivan's remarks provided a welcoming context for the public testimony submitted by members of the Divest UH coalition and other supporters urging the university to say "no more" to fossil fuels. In addition to the 18 people who spoke at the meeting, the Regents received 477 pieces of testimony supporting divestment. 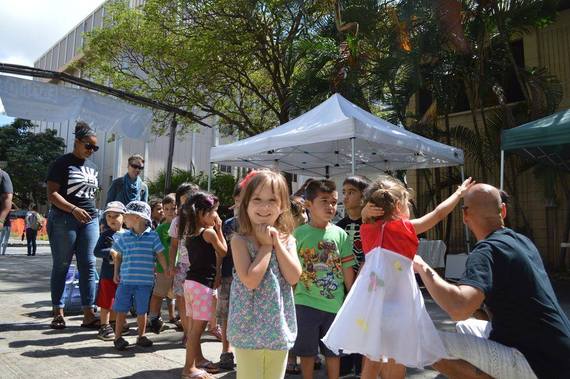 Starting young: At the UH Earth Day Festival in 2014

Clearly the subject touched a chord, judging by the turnout in the gallery, the many Regents outside of the committee who attended, and the presence of the Board Chair, Randy Moore and UH President, David Lassner.

The Regents heard testimony from many different stakeholders. State Representative Chris Lee offered the reminder that every dollar spent on dealing with the consequences of climate change was a dollar not invested in UH. He is involved in discussions about divesting state funds from fossil fuel investments and suggested that action by the Regents could well be followed by similar action from the legislature.

What is the risk?
Michael Kramer of Natural Investments and Paul Solli of the Aperio Group, which quantifies the impact of social screening on portfolio risk and return, provided valuable data and analysis of what happens when you divest. Their experience and models support the finding that divesting from fossil fuels is prudent investment practice. The Aperio Group made it very clear that if you eliminate fossil fuel companies and rebalance the remaining companies to track the market, the absolute risk to investments is virtually immaterial. Their written testimony, and that of Donald Gould, trustee of Pitzer College and head of his own asset-management firm, were among the most compelling arguments for divestment. Pitzer College was the 11th college to divest. UH could become the 17th.

Brodie Lockard, who founded the Hawaiʻi chapter of 350.org, led the effort to gather and prepare expert testimony for the Regents. 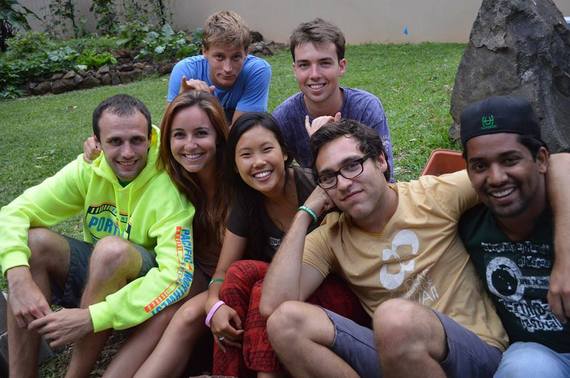 Some members of the UH Student Sustainability Group: Doorae Shin (center)
was among those who urged divestment.

Students, Faculty Urge Divestment to Counter Hawaii's Vulnerability
UH Student Sustainability Coordinator, Doorae Shin, was one of several students who said emphatically that "Having millions of dollars of the University I attend invested in the very companies that are at the root of our environmental crisis is simply unacceptable." She reminded everyone that "Hawaiʻi has rapidly become the most dependent on fossil fuel imports compared to any other state in this nation... and these islands we love are one of the most vulnerable places on the planet for climate change... Almost 40 percent of the endangered species in the United States are from Hawaiʻi, and nearly 75 percent of all U.S. extinctions have occurred in Hawaiʻi." LeiLei Joy Shih, a Ph.D candidate in oceanography also testified in her capacity as Conservation Chair and Vice-Chair of the Sierra Club Oahu chapter, urging divestment. In calling for action now, Professors Joe Mobley and Mark Hixon spoke movingly of witnessing, through their research, the degradation of the islands' natural beauty and resources over the last few decades. 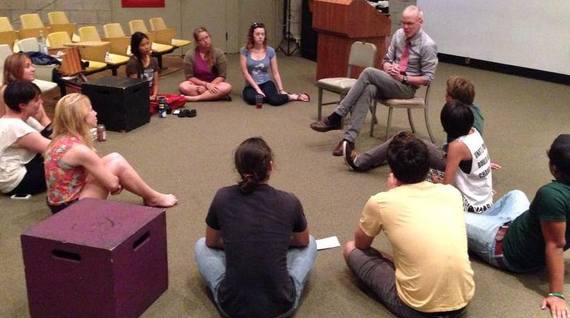 Bill McKibben, co-founder of 350.org talks story with UH students during his 2014 visit.

Riding the Talk: BOR Chair Randy Moore
During the discussion that followed, retired Supreme Court judge, Simeon Acoba, Jr., one of the Regents who took the time to attend the meeting even though he is not a member of the Budget and Finance Committee, attested to Board Chair Randy Moore's commitment to doing the right thing.

"On my way here I passed Randy on his bicycle, riding to this meeting," he said, to appreciative laughter!

As Chair Sullivan observed, there is much hard work ahead. The applause that broke out spontaneously at the end of the comments by the Regents reflected the palpable sense of optimism and unity of purpose felt by all. One Regent, Stanford Yuen, even commented that the idea of divestment seemed like a "no brainer."

The Regents of the University of Hawaiʻi show every indication of being ready and willing to engage in a collaborative effort to draw players from all the different constituencies into the discussion to move the university forward. We have good reason to hope for a more robust and holistic living-out of what this land, sea and space grant university teaches about sustainability in one of the most beautiful places on earth. Perhaps the time indeed is now. 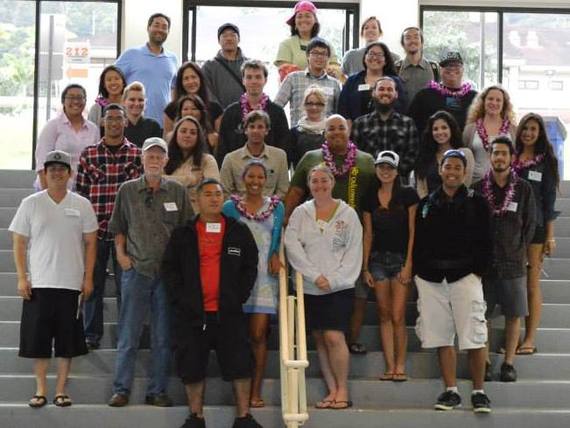 The Student Sustainability Coalition of Hawaii, an interisland, higher education effort. All pix courtesy of Wyatt Musashi Bartlett, a member of the coalition.