The following is an edited version of the Commencement Address I delivered at Third Presbyterian Church on May 16, 2015 for the graduating class at Colgate Rochester Crozer Divinity School.

To President McMickle, Board of directors, esteemed faculty, beloved family and friends, and most of all, to you students I want to say what a profound honor it is to be with you today to celebrate the graduates of the class of 2015 from Colgate, Rochester, Crozer Divinity School.

It's an odd week to be graduating from a mainline, progressive, Christian, Divinity School. As many of you know, a major study came out from Pew on the religious landscape in America with the startling headline that Americans who call themselves Christians has declined by 8 percent over the last 8 years.

According to the data, the biggest 'losers' were the Catholic Church and Mainline Protestants. While the numbers of those who identify as Evangelicals held steady or even gained a point. Ever quick to misread a text, some prominent Evangelicals were crowing about how the study proved the superiority of their conservative Christian faith.

The problem with that argument is that conservative Christian rhetoric and politics are part of the reason given by many of the people who have left the church. The most striking news in the report is the confirmation of the extraordinary rise of those who don't identify with any religion, also known as the 'nones', and this is especially true among young people. One in three millennials do not identify with any religion.

In preparing for this day, I asked a younger friend of mine who is not associated with any faith tradition to do a little word association game with me. When I said the word Christian he immediately rattled off: "Closed minded, only out for themselves, wanting to tell others what to do." And I said to him: "But you know that I am a Christian pastor," and he said, "oh, yeah but you are different." Apparently meaning that I didn't represent what "real" Christians are like.

Sociologist Robert Putnam at Harvard and Political Scientist David Campbell at Notre Dame wrote a piece called God and Cesar in America in which they explain: "To (millennials), 'religion' means 'Republican,' 'intolerant,' and 'homophobic, and since those traits do not represent their views, they do not see themselves -- or wish to be seen by their peers -- as religious."

A 2014 study by Public Religion Research Institute showed that fully one out of three young people left their faith because they perceived it to be as hostile to LGBT people.

I want to make clear, most of these young 'nones' are not atheists, in fact, many of them claim a belief in God. The problem is that they perceive the church to be hostile to them or to those whom they love, unwilling to engage their questions as they seek for meaning, and/or indifferent to the deep and often systemic injustice they are facing in the world in the 21st century.

So, I do find the religious landscape study very troubling, but not because there aren't as many Christians as there used to be. Rather, it disturbs me because so many people have been hurt by a horrible lie about who Jesus is, and what his church is about. It is up to us to go out there and reclaim, and proclaim the authentic Gospel of love and liberation so that at least people will understand who Jesus is, and why we continue to commit our lives to follow him in the 21st century.

And in that I am hopeful today because you all are sitting in front of me and will be going out into the world just like another student who celebrated his graduation from this institution in 1886. My great-grandfather's first call out of seminary was to a small German Baptist church in New York City. He went down there without much sense of their actual lives and later explained: "My idea then was to save souls in the ordinarily accepted sense." Yet, the people he ministered to radically changed his life and expanded his own understanding of the reach of the Gospel.

Rauschenbusch, like you, received his theological education in a time of great change and great suffering. America in the late 19th century, like now, was marred by enormous disparities between the rich and the poor with little or no resources for the 'least of these.' In that time, as now, many of those on the margins felt that the church was of no use to them, or actively working against them as they struggled to feed their children on starvation wages.

The longer Rauschenbusch was in ministry with them, the more he knew that his place was along side those suffering, whether they were members of his congregation, or even Christian at all. Reflecting on that time, he remembered most of all the funerals of the children in his neighborhood who died simply because they were poor. Rauschenbusch lamented: "Oh the children's funerals! They gripped my heart - the small boxes. I always left thinking - why did these children have to die?"

Rauschenbusch used the training he had received here in Rochester to go back to the Bible and re-read the scripture with eyes wet with the tears of loss and suffering of the poor, the hungry and the oppressed with whom he was ministering-- and that was the genesis of all his future work. He had learned the Lord's Prayer at his parents' table and learned how to approach the text in the seminary classroom. But, only after his time burying the poor children could he really hear the clarion call of 'Thy Kingdom Come, on earth as in heaven' and join in soulful and prophetic solidarity with those who needed God's will and justice here, and now, and not in some future and faraway place after death.

This is just one story of the kind of Christian this institution has graduated over the years. It is an example of a progressive faith that took seriously the lives of people and their struggles and stood in solidarity with them. It was fueled by a deep spirituality that accompanies such a journey of faith and if you want to really get to understand Rauschenbusch I suggest you look at his prayers.

This tradition of progressive, prophetic, and spiritual faith is found in other iconic alums of CRCDS such as Helen Barrett Montgomery, and Howard Thurman and Martin Luther King. They offer us inspiring examples of Christians convicted and transformed by the very people whom they encountered in their ministries, resulting in deep spiritual witness and prophetic fire.

Yet I hope that CRCDS will avoid looking back wistfully to the past as the good old days. To really follow in their footsteps is to face towards the future. Our work is to build upon the foundations of the kingdom of God that we have inherited from them, and to let their lives inspire us to do even more and to bend that arc of the universe even further towards Justice.

Our faith is a forward looking one, and that is mandated by Jesus himself.

In the Gospel of John Jesus says to his disciples: "truly, I tell you, the one who believes in me will also do the works that I do and, in fact, will do greater works than these, because I am going to the Father. "

Jesus was telling his disciples then, and telling us today, to avoid the temptation to look to the past as the only locus of the important work of God, instead, we are to look forward, and continue to bring the spirit of Christ and to do the work of Jesus in the world today. And what is that work? To proclaim good news to the poor, freedom for the prisoner, recovery of sight for the blind, and to set the oppressed free.

And the really amazing news is that Christians are doing that right now.

From my vantage point as religion editor at The Huffington Post, I see what Christians from around the world are doing and actually feel this is the most exciting time for progressive faith that I can remember in my lifetime. Christians are on the front lines demanding that BlackLivesMatter in Ferguson, Cleveland, New York and Baltimore, holding communion services at the border and demanding a just and merciful immigration policy, dedicating themselves to caring for God's creation, proclaiming the full humanity of LGBT people and honoring their relationships as holy, showing solidarity with our Christian brothers and sisters persecuted in the middle East, leading interfaith engagement and standing up against Islamophobia and Anti-Semitism, we are demanding gender equality both in and out of the church, naming the moral outrage of the growing gap between the rich and the poor, and waging peace between people's around the world. Every day I see the continuing spiritual power of the Gospel wielded by women and men who are healing broken souls and transforming systems that oppress.

This is the Jesus movement I want to introduce to people who feel that the church doesn't care about them. I want them to know about the exciting things that are happening right now, including all of the ways that you are gong to be doing ministry in the world. Let's go out there and shout if from the mountain tops, because it is such good news.

We are all part of the grand Christian story that stretches back 2,000 years and today, with this graduation, we turn and look out into the future with courage and hope. CRCDS has played an oversized role in that history by training some of the most important leaders in in this country and around the world. It is crucial that this school be part of our future, creating more leaders like you graduates. Believe me, they didn't ask me to say this, but two of my largest contributions ever year are to my seminary Union and CRCDS. Let's all find ways to build up this great institution, invite students to apply who you think will thrive here, find donors who value the kinds of values that you have learned here, let's make sure that CRCDS does even greater things in the future.

And one final hope for you graduates and to all of us who are attempting to follow in the way of Jesus. Maintain your spiritual practice even as you do the work for justice in the world. Continue to strengthen your personal connection with Christ. Pray, meditate; take time to breathe every day. Find space for joy. Abide in Jesus, so that you might do his work and even greater. And may God bless your ministry as you live into and create the future of our faith. 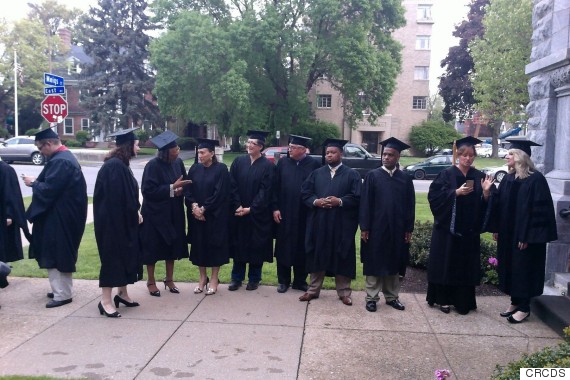