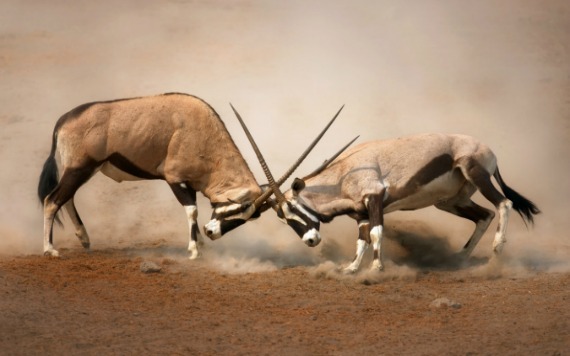 When the heck is the divorce fighting going to end? My friend John is 11 years separated from his ex and at least 7 years divorced and they're still at it. Like cats and dogs.

They had one of those text fights the other day. You know, the kind where you send a text and get one back that's a little nasty. So then you reply with a bit of edge only to get one back that's just as sharp. Before you know it, about a dozen texts fly back and forth with each of you trying to be more clever and biting than the other.

And what did it get you? High blood pressure, a couple of grey hairs and a few seconds off your life.

Why are they still angry at each other? Didn't they get divorced so that they could be apart from each other for good?

Well, they have children together. Like it or not, they still have to deal with one another for many more years.

So many people falsely believe that once they divorce, somehow all their problems will go away. In some cases, the divorce fighting become worse.

When married, if you have a difference of opinion you work it out one-way or the other. At best you'll compromise. At worst you'll fight until someone gives in but either way, you figure it out.

When divorced, a difference of opinion can land you back in court if you don't have a solid conflict resolution plan in place. This sort of plan is best hashed out during your divorce to help resolve future disputes.

Like so many divorced people with kids between them I too have had so many of these encounters that I'm starting to lose track. It isn't easy. At this rate, I'll probably lose about eight minutes off my life!

So what's the answer? How do you stop the fighting?

Although John and his ex do have a conflict resolution plan written into their divorce agreement, it still is costly.

Theirs says that if they cannot come to an agreement concerning an issue, they go to a mediator for up to three sessions. If an agreement still cannot be reached, they must go to family court.

John is a regular working guy and neither he nor his ex can really afford to go this route every time they disagree so they usually just keep fighting.

Well, John desperately needed a change from the madness so I suggested he call a truce.

Look, the divorce fighting is eating away at you. I can see how stressed out you are so why don't you try treating each other as you would any stranger you met at a cocktail party or even on the street? Maybe if you are at least polite and respectful to one another, the fighting may lessen and your problems may be easier to handle.

So John and his ex agreed to treat each other as they would any stranger on the street. Believe it or not, this would be a huge step up for them. I mean they were both really sick of the constant mean divorce fighting.

They agreed to a truce and since they were now officially on 'better terms', she immediately asked him for a few favors.

Had he made a mistake? When would the take, take, take attitude end?

Well, he did just say that he would try this truce out and someone has to take the first step so he fulfilled those favors in the hopes of a new and more peaceful future.

I have to admit I felt a bit used. I mean the words about calling a truce were barely out of my mouth and she asked for three favors! Well, I was the one who wanted this and I did say I would try so... whatever.

I saw him about a week or so later and asked how it was going. John said,

I have to tell you that without a doubt I definitely felt a lot less stress almost immediately. Seriously. It used to be that I would totally tense up and my breathing would literally restrict at a mere email from my ex. I'm not kidding, my chest would constrict because I knew any message from her was likely the start of another fight! Now I feel like I can breathe again.

The fortunate timing of school's end helped their plan along.

The truce had been declared mid June and they were now faced with the wide-open promise of summer.

The kids were in camp and the fighting was soon a distant memory. There was little to no reason to communicate with each other for the entire length of the summer so he felt pretty good about how well their decision had been going.

What a great summer!

This article originally appeared on DivorceCandor.com