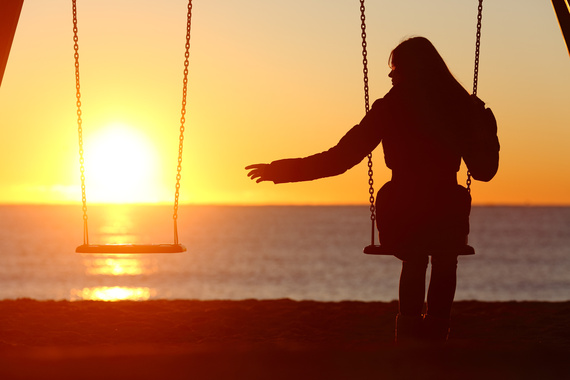 When I was younger, I always pictured that I would get married, have a nice house, raise a few kids and retire with some money in the bank. I vowed that if I did get married I would never let it end in divorce. I assumed that I would marry someone who would always reciprocate my love and together we would take on the world, trusting that neither of us would ever dare hurt the other. I saw marriage as a magical venue full of hope and growing, a partnership intertwining friendship and intimacy. I believed that marriage truly would bind two souls together and hold them tight through even the wildest storms.

And now, after battling the storm and finding out that some bindings just don't hold as tight, I find myself drenched in conflicting emotion and drowning in contradictions. A part of my naïve heart wants to keep believing in the dreams of marriage I had before, but the divorced part of my mind insists on cynicism. It's a battle I struggle with often and I try to be an optimist and see marriage in the positive light I used to but sometimes it's hard. Sometimes it just doesn't make sense to me like it once did.

My views on marriage have changed drastically in the past year, not specifically on the institution itself, as I still see the value that many religions place upon it as well as the non-religious benefits of sharing such a deep union with another person. I still respect marriage and the people close to me who choose to take that path. Never would I tell someone that marriage is not the right choice, because as previously mentioned, my heart still remains hopelessly in love with love.

But it has a different meaning now. It no longer means 'til death do us part. Marriage no longer feels like it could be forever and in turn, feels cursory. The wedding, the ring, the vows, the spectacle -- I did it, I believed in it, and it let me down so I have begun to place my hope in strong relationships instead of the idea of marriage itself. The wedding industry plays tricks on people's minds and makes us believe we need to get married to secure our relationship. We need a white dress and a diamond to add significance to what should already be a strong union. Yes, I did the big hurrah and it was an amazing day, but would I do it again? Most likely not.

Because what getting divorced at such a young age has taught me is that the relationship you have with someone matters more than the actual wedding and the marriage that follows. My views have shifted from needing a marriage to fulfill the life I pictured in my younger years to knowing that a piece of paper and an exchange of vows doesn't change much of anything. You still wake up the next day and everything feels the same.

I try to view my change of heart in a positive light and consider it a lesson learned. My belief in marriage and my views on such a union have definitely been tainted and as much as I say I would never get married again, I know that I can't predict the future. I know that if love happened for me once more, I would consider marriage but in a completely different light than the first time around.

The thing I want most if I do end up married again is a solid foundation. A relationship that can weather any storm, whether there's a formal wedding involved, a simple ceremony at city hall, or maybe no legal binding at all. My views on marriage have shifted from superficial to entirely sensible. I believe that people can technically be married even though there are no documents to prove it. I believe that serious relationships that are strong and cohesive are just as meaningful as those that include marriage. I believe that people need to stop putting so much emphasis on buying or receiving a ring and instead put that energy into bettering themselves and their partnership. At the end of the day, I respect every single couple's choice of how they want to solidify their partnership but I encourage everyone to include love, trust, and respect in their union no matter what path they choose.

I'll continue on my own path, edging the line of hopefulness and cynicism, knowing one thing for sure: My divorce changed me in a way I could have never predicted and in a way I know some can't understand. But realizing that my beliefs are able to shift and adjust as I continue to grow proves that I am maturing; and, in reality, that is what I really hoped for when I was younger.

If you divorced in your 20s and learned a lot about love, life and yourself in the process, we'd love to hear your story for our series, Divorced By 30. Send us a 500-800-word essay or an idea for a blog post to divorcedby30@huffingtonpost.com

8 Women Whose Divorce Was A Catalyst For Change

DIVORCED BY 30divorceLoveRelationshipsMarriage
Go To Homepage

Relationship blogger, lover of all things 90s, and a not-so-basic millennial. www.thelovehawk.com