If you're a divorcing parent, worries about your kids are high on your "list of stuff that keeps me up at night." Do they feel betrayed? Angry? Grief-stricken? Stigmatized? Will they live like ping pong balls, miserably bouncing between homes? Will they have difficulty forming loving attachments in the future or develop a cynicism about marriage? These are natural questions, and they often prompt concerned parents to ask me if they should put their kids in therapy. Here's what I say: divorce stinks. I'd be worried about any child who didn't have a hard time coping with it. So if your child is showing signs of stress does that mean they need treatment? Not necessarily.

Even a well-handled divorce is a huge upheaval. For your kids, as for you, the first step toward adjusting to the "new normal" is facing and working through the tough feelings associated with the changes and losses they're experiencing. The fact that your 8-year-old cries easily or your 17-year-old is more angry than usual could, ironically, be a sign you're doing something right. It may mean your son or daughter sees you as strong enough that he or she doesn't need to take emotional care of you, and so feels safe to let you see how they're really feeling. If that's true, putting them in therapy might not only be unnecessary but a bad idea. After all, they're not the problem, and you don't want to do anything to suggest otherwise.

A child who expresses emotional distress either indirectly (e.g., tearfulness, irritability) or directly ("I hate you, you're ruining my life!") is calling out for reassurance. Even if he or she says "I'm fine, I don't want to talk about it!" or flees the room whenever you raise the subject of your divorce, it's important to convey that you know that what's happening is tough on them, that you care about how they're feeling, and that you're available to talk about anything anytime. Unless your child comes to you on his or her own, don't push for a heavy discussion. Instead, pick occasional casual moments and sparingly sprinkle them with inviting comments, such as "I've been feeling sad about the divorce, wouldn't be surprised if you were too," or "It feels like you've been kinda mad at me lately. Makes sense, given all the changes you're having to deal with all at once." Don't worry if your child doesn't respond or seems not to be listening. He or she is taking it all in.

It's common for separated parents to disagree about whether their child needs therapy or to blame each other for their child's distress. While your child might be having more difficulty with one or the other of you, try not to jump to conclusions. Kids often express different parts of themselves in each of their homes. The fact that a child has frequent temper tantrums at Dad's house and none at Mom's doesn't necessarily mean Dad is the problem. There are many potential explanations; perhaps the tantrums are an expression of the child's anger at not seeing Dad more often. Similarly, a child who complains to Dad that Mom is "mean" may unconsciously be trying to stir up trouble between her parents in order to force them to talk to each other.

Some children are particularly hard-hit by divorce and don't bounce back as quickly or easily as others. Even though you know your child well, it can be hard to tell which camp he or she falls into -- especially since you're likely riding your own emotional roller coaster! So how can you know when your child's problems are likely to resolve on their own over time and when you need to find outside help? When parents either disagree or are on the fence, I recommend they err on the side of caution by getting a consultation. If your child does need therapy, early intervention is the key to good results! If your child doesn't need therapy, a well-trained clinician will tell you so -- but they might be able to help you and your ex to understand your child better and offer advice on how to help your child through the tough times.

Specific Symptoms That Mean Your Child (Probably) Needs Therapy (Note: Many of these are rare and/or don't necessarily indicate a serious problem!)

• Problems with eating or sleeping with no medical basis (including nightmares that don't go away)
• Excessive difficulties with separation
• A consistently (and persistently) sad or melancholy mood
• Physical complaints with no distinguishable cause (such as headaches or stomach aches) that don't go away with reassurance
• Disinterest in friends or trouble getting along with peers
• Deteriorating school performance
• Difficulty concentrating
• The new appearance of agitation or fidgetiness
• Extreme or unrealistic fears/phobias
• Excessive or public masturbation
• New or extreme accident proneness
• Decrease in self-esteem
• Fatigue or apathy with no medical basis
• Excessive weight loss or weight gain with no medical basis
• Aggressive behaviors toward self or others (such as biting, hitting, or scratching)
• Risky or acting out behaviors (such as lighting fires)
• Constant rudeness and "talking back"
• Heavy drinking or drug use
• Stealing
• Excessive lying
• The appearance of obsessive or compulsive rituals (such as hand washing or pulling out hair)
• Preoccupation with death
• The wish to die ( Important note: If your child expresses a feeling that life is not worth living, get help right away -- do not take it upon yourself to determine if this is a "real" or "serious" problem.)

If any (or all!) of this sounds scary, here's some good news: While your split will always be a sad memory for your kids, it doesn't have to be a bad developmental turning point in their lives. If you and your ex can protect your children from conflict and can support them in having a full and loving relationship with both of you, they can do fine. 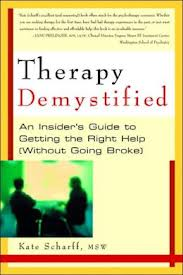 To learn more about child therapy, including the "Top 10 Bad Reasons to Avoid Child Therapy," tips for preparing your child for therapy, and information about how play therapy really works, read Kate Scharff's book "Therapy Demystified: An Insider's Guide to Getting the Right Help (Without Going Broke!)"