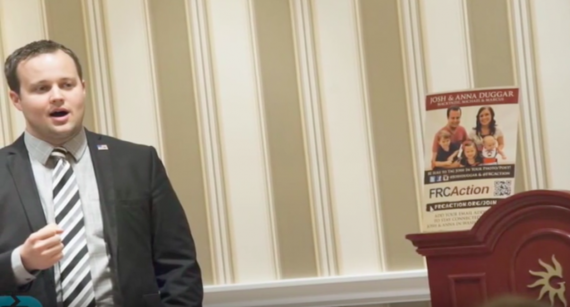 In the recent Ashley Madison hack, Josh Duggar was outed as having a paid account for seeking adulterous affairs.

This, of course, came on the heels of the recent horrific revelations that he molested his sisters as a teen.

And, perhaps not surprisingly, reports are now surfacing that Anna Duggar, Josh's wife, will not consider divorcing him as an option. In fact, she may even be accepting some of the blame for his recent behavior. Both are said to be turning to their faith and praying together as the solution to these issues.

Michelle and Jim Bob are also praying and trusting in God.

But I have to ask - what kind of God are the Duggars praying to and trusting in?

It is well known by now that the Duggar family, conservative quiverfull-type Christians slash reality TV stars, are followers of Bill Gothard and the Institute in Basic Life Principles. It's also well known that Gothard has recently been outed for alleged sexual misbehavior of his own -- in his case, years of allegedly grooming young women (some underage) in order to sexually harass and assault them. Gothard is unmarried and is yet viewed by his followers as the foremost guru on chaste courtship before marriage, male headship within marriage, and unhindered childbearing for the duration of marriage.

Hence those 19 Kids and Counting.

The Duggars are a household name by and large because of their adherence to Gothard's teachings; and they are caught up in a hurricane of scandal for the very same reason.

So again, I ask, what kind of God are Gothard and the Duggars praying to - and promoting?

In situations like these, it is common for religious leaders caught in some offense to make it clear that their actions occurred despite their faith and belief, not because of it. Duggar has done the same, calling himself "the biggest hypocrite ever" and worrying for the reproach he has brought to Christ. And that seems reasonable, on the surface. We have all betrayed our values and ideals to some degree.

That's why the best response to the Josh Duggar situation (and any of the others caught in this hack, which is already claiming lives) is certainly not to thumb our moralistic noses and join the indulgent Internet shame parade.

Yet, it is not as simple as saying Josh Duggar (and the man Josh likely worshiped his entire life as a religious hero) simply acted in contradiction to his belief, in fits of passion or pits of addiction. In fact, I believe the root cause of Josh's behavior is unequivocally linked to his faith and belief. It's true that different-looking fruit may come from that same root, and Jim Bob's patriarchal sins are not identical to his son's; but Jim Bob prays to the same God who necessarily and with regularity molds men that molest, harass, abuse, and cheat.

In short, a Monster God.

This Monster God promoted by both Gothard and the Duggars is a God for whom absolute power is the ultimate good - power that is uniquely delegated to men, to be especially wielded over women. In a manner similar to common Calvinistic teachings, Gothard's God is one that exercises power with no accountability (not even to his own character or nature) and may just as soon hate, torture, and murder as love and forgive. His unpredictable whim is divine law. In fact, this God's "forgiveness" is less about love and more about submission to his power. To submit without any concern for oneself is to be forgiven. Likewise, forgiving others (like cheaters or abusers or molesters) while blaming oneself is the logical requirement of this "forgiving" God.

Josh Duggar's God is one that has lifted a man, Duggar, above women to represent his power (goodness). The superficial moral restraint of courtship merely encodes this power from the start; Jim Bob controls the courtship just as Josh controls Anna. She will exist to submit to Josh, and that is her ultimate good. Real morality matters little.

The public apology with its language of repentance, then, is a charade, a bit of well-meaning theater, a play act, because the natural consequences for actions in the real world do not apply here. Sure, there is scandal and job loss (and the Duggars have often lamented "the media" for this). But with Josh Duggar, like Bill Gothard, everything is forgivable because these men embody the absolute power of God, the ultimate good.

And for Anna, divorce is unforgivable because she must embody absolute submission as the ultimate good.

Josh Duggar and Bill Gothard's Monster God makes men into monsters as they live out the natural implications of their prayerful belief in him.

In response to this unfolding scandal, I submit to you that joining the shame parade is an unhelpful response that misses an important opportunity.

The opportunity for the church, for followers of Jesus, for all of us, is to divorce this Monster God once and for all.

An unaccountable God whose unpredictable whim is the omnipotent law and the ultimate good that we worship, pray to, and promote should be promptly served divorce papers, because our freedom and true goodness is to be found beyond the bonds of that unholy marriage.

And in his place, let us join ourselves again to the One True God who is completely accountable to his own character, which is really and truly good, defined by the very character of Jesus and the fruit of Jesus's Spirit.

Let us put away the Monster God who harms, molests, and enslaves with his power (even the ones to whom his power is granted), and marry again the God who looks like Jesus, whose law is always love and whose gospel is always peace.

And let's pray to that God and trust that God for real deliverance and liberation for Anna Duggar and the whole Duggar family.