As the brainchild and CEO of DivorceHotel I get invited all over the world to discuss our new 'one-weekend' divorce solution in talk shows and radio broadcasts. Especially the start of DivorceHotel in The United States triggered an explosion of interview requests from all over the world. All these invitations present the unique advantage that I hear a lot about new developments and trends in the divorce industry, which we can all learn from. One of these requests led me to a popular late-night talk show in Germany. Coming off my flight to Germany, I drove to a beautiful old castle for the recordings. One of the guests that night was Katrin Richthofer, a divorced mother of three beautiful children, who succeeded in breaking up with her former husband in a positive way.

Katrin and her former husband had chosen for a creative parenting approach called "Nesting," a concept that is becoming increasingly popular among parents with young children. Most stories about Nesting are written by mediators and lawyers. This is why I decided to let Katrin do the talking and it resulted in a real-life story about "Nesting." In a "Nesting arrangement" children will stay in the house while parents take turns living there. With all that is changing in the children's lives, one important factor remains intact: their home. I had already read a lot about Nesting but Katrin's story gave a vivid impression of why it is such a great solution!

Katrin's story
For 14 long years, Katrin thought she had the perfect relationship. She met her husband at a wine tasting of some friends; they moved in together two weeks later, got married the year after and had 3 wonderful kids. In their circle of friends they were the perfect example of a happy family: there hardly ever were any quarrels. Nothing could go wrong, she thought...until things started to change when Katrin met a former boyfriend she hadn't seen for 19 years - a father of 4 daughters now. After meeting her ex, she realized something was wrong with her current relationship. That same evening she had a discussion with her husband about what was wrong and his reaction was quite uninterested. She nevertheless decided to fight for their relationship. After months of therapy, lots of e-mails and conversations, their relationship improved somewhat, but they both reached the conclusion that things just didn't work the way they should, with Katrin's soul mate 'being out there'. A divorce was unavoidable.

Nesting
Now, 18 months after Katrin split up with her husband, she is a part-time mother, who shares her 3 kids and house every other week with her former husband. "For me, this was the perfect way to handle my divorce - a life on a clear, level playing field, with equal duties, possibilities and chances to work and live for both parents - at last... Few people know about 'Nesting'. It's definitely not the easiest way to end a marriage. I'm sure you can imagine the challenges of structurally sharing a house and caring for 3 kids together with somebody that you once loved. If both partners agree to look for solutions rather than argue about guilt and they make the effort to live with a clear constructive focus on the future, instead of mourning what they lost, it is possible to make Nesting work. For me it is a healthy path too, everybody involved has to cope with the new situation instead of ignoring the new facts - both the adults and the kids. Yes, it does hurt - but it helps to heal as well. When my 11 year-old daughter says that the biggest problem between her divorced parents is that they complain about what the other one left in the fridge, I consider this as a big compliment..." 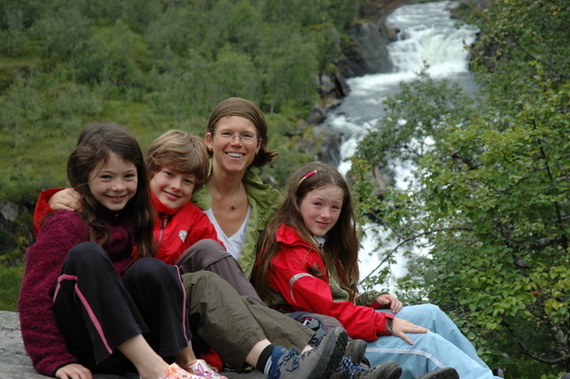 Katrin Richthofer and her three children

Katrin's Nesting advantages
Katrin doesn't think the 'Nesting' solution sounds crazy. "Crazy!?" "If you can't save your marriage, if you both feel you have grown apart, .... just think about it. It's not necessary to always focus on each having your so-called '50/50' share - maybe allowing your partner to stay in the communal home when she or he has the kids is enough ... because, yes indeed, the kids are the real winners when you choose for Nesting!"
Go To Homepage