It's a Hindu holiday -- and an important one -- celebrated this week by Hindus all over the world, including an estimated 2 million in the United States. But do most Americans even know what Diwali is all about?

Many Hindu Americans say no, and they're working to change that, but not with educational billboards or "A Charlie Brown Diwali" special on network television.

Instead, they're encouraging fellow Hindus to be a little more open about their celebrations -- to tell friends, colleagues and their children's teachers that Diwali is a big deal within Hinduism, the world's third largest religion.

"Someday it's my hope that you'll say, 'It's Diwali,' and the boss will say, 'Oh, OK, you’ll take the day off,'" said Suhag Shukla, managing director of the Hindu American Foundation. "That's progress -- the feeling that as a Hindu, you don't have to explain."

Dr. Rasik Shah, a pediatric lung specialist in New York City, said he used to be a little shy about taking Diwali off. "But over time," he said, "I have been a little more bold, a little more vocal."

Often, he said, he'll have to explain it.

For starters, it's the celebration of the Hindu New Year, not all that different from Judaism's Rosh Hashanah, with equal parts of Hanukkah's festival of lights and Fourth of July sparklers thrown in.

On a deeper level, Diwali celebrates the triumph of good over evil. Celebrated by Hindus and some Buddhists, Sikhs and Jains, Diwali draws on the legends of each religion.

One of the most popular commemorates the return of Hinduism's Lord Rama from banishment. According to the ancient Hindu epic Ramayana, Rama destroys a 10-headed demon. As he returns home, villagers lay out lamps to light his way. The name "Diwali" means "row of lights."

Most of India, where 80 percent of its 1.2 billion people are Hindu, is off for Diwali. Families pray at Hindu temples and deliver their best dishes to friends. At Diwali parties, there’s dancing, variety shows and fireworks.

In the United States, the celebrations are more subdued, given the relatively small Hindu population and -- as many Hindu Americans point out -- stringent laws on fireworks.

Many U.S. Hindus don't take the holiday off, even the key day, which falls on Wednesday (Oct. 26) this year. And that's just fine with most Hindu "pandits" or priests, including Muralidhara Bhatta, the spiritual leader of Durga Mandir, a Hindu temple in Fairfax, Va.

Bhatta expects a crowd at the temple on Wednesday night, but in his and many other American Hindu temples, the biggest celebrations will occur over the weekend, when he expects more than 1,000 people.

"What we want is people's involvement," said Bhatta. "So we'll celebrate in a different way."

Vivek Dwivedi, a NASA engineer who lives in Maryland, said he will observe Diwali American-style by taking a half-day off, going to temple for prayers, decorating his house with Christmas-style lights and visiting friends and family.

NASA and the federal government are good about allowing people to use earned personal days to celebrate religious holidays, Dwivedi said. Still, he added, it would be nice if more Americans knew a little about his religion and culture.

Part of the problem may be that non-Hindus haven’t bothered to learn, but it's also Hindus themselves, he said. "I don’t want to blame the Hindu community, but maybe Diwali should be advertised better."

To that end, he praises Mindy Kaling, who stars as Kelly Kapoor, a Hindu employee on NBC's hit series "The Office." An episode called "Diwali," written by Kaling, centers on the boss's clueless attempts to get his employees to appreciate Indian culture.

The episode, which first aired in 2006, represents perhaps the brightest spotlight ever shone on Diwali in the United States. The White House first celebrated the holiday in 2003 and President Obama in 2009 became the first U.S. president to attend the festivities. Shukla called the gesture significant.

"It sends a message that Americans of all faiths and of no faith are being acknowledged," Shukla said.

Raised in India and New York, Padma Kuppa sees Hindus winning greater recognition and acceptance in the U.S., but said she has to keep working at it in her adopted home of Troy, Mich.

In Troy, where Hindus make up a majority of the student body in at least one public school, district officials readily agreed to avoid scheduling parent-teacher conferences on Diwali. But then, at her older daughter’s high school, where about 10 percent of the students are Hindu, they scheduled homecoming on Diwali.

Her daughter didn't go to homecoming that year.

"It's a question of acculturating and accommodating," Kuppa said.

PHOTO GALLERY
Diwali Celebrations Around The World (PHOTOS)(CLONED)
Download
Calling all HuffPost superfans!
Sign up for membership to become a founding member and help shape HuffPost's next chapter
Join HuffPost 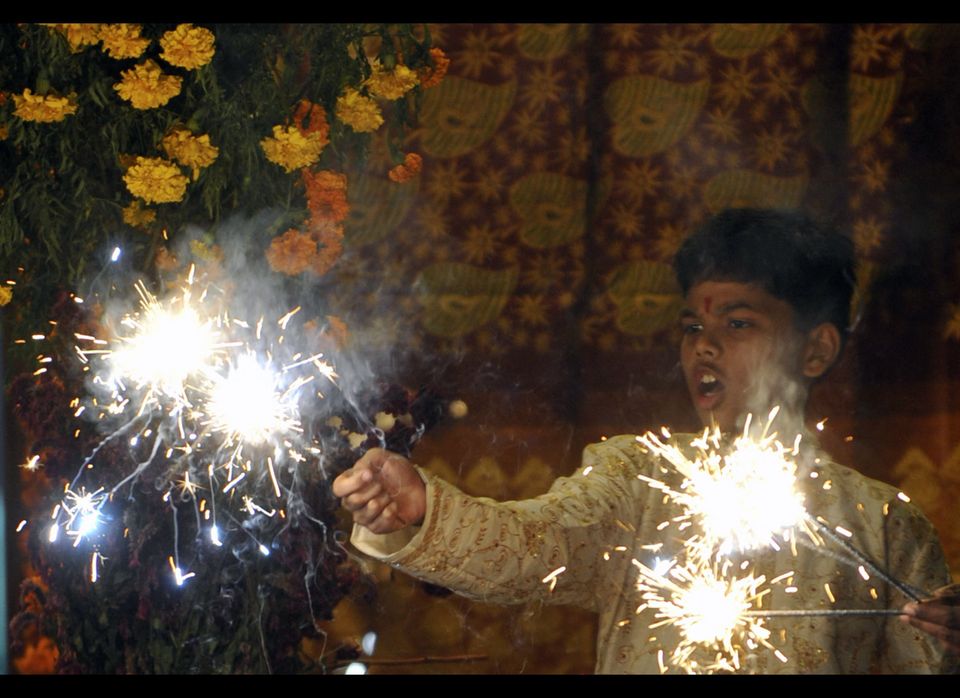 1 / 27
Fireworks!
In this photo, an Indian boy plays with fireworks during Diwali in Hyderabad on November 5, 2010 (Noah Seelam / AFP / Getty Images).
Getty