She fell in love with Baby Jesus around this time last year. 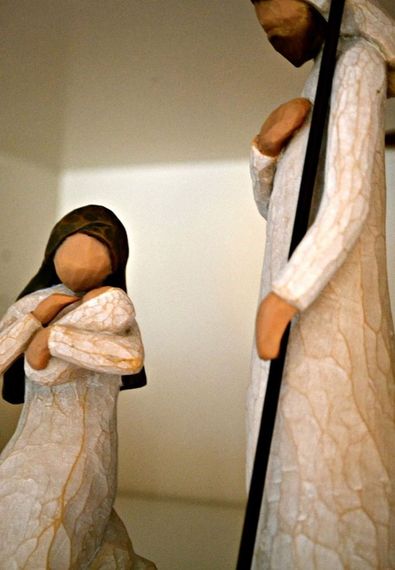 We hadn't talked about him much. But stumbling upon him is inevitable this time of year. She'd picked up a book about the nativity during a rainy afternoon at the bookstore. The book had a button you could press to hear a tiny version of "Silent Night" that sounded like it had been played on a tin can and, at first, this was the draw. She and her brother took turns pressing it for the instant gratification. But then she curled up next to me on the small bookstore bench and peppered me with questions. So I told her about Baby Jesus. His modest Christmas birth. His mother, Mary. And then I stopped, having stumbled enough and not wanting to ruin the story.

It's not that I don't know this story. I know it by heart. I once fell in love with Baby Jesus too. I sought out nativity scenes and gazed upon them. Read all I could about the story and wrapped myself in the mystery of it all. I daydreamed about what it must have been like. To be young and alone and visited by angels. To carry such an important and special little baby and give birth in a stable. As Christmas Eve dawned each year, I spent more time wondering about a miracle birth than I did dreaming of reindeer landing on my roof.

And I've felt something about not introducing this to her sooner. It's the one element of my childhood holidays that I haven't fit into our Decembers. It's not guilt. It's not even so much the idea that something is missing. This is her sixth Christmas and it's been nearly three times that long since Baby Jesus took the stage for me. His absence isn't particularly noticeable. At least, not during the hustle and bustle and busy of this month. But during the morsels of quiet time that sneak into the crevices, I wonder. I wonder things like why? Why haven't I shared this with her? And how? How do I introduce her to the story and the mystery? And what will it mean to her?

The first question is easy to answer. Why? Because I'm shaky here. Not in my faith, necessarily, though I'm not rock solid there either. But I'm shaky in how I want to raise them when it comes to questions of faith and religion and belief. It's not so clear here, where cultures blend. Our Divali lights and Christmas candles are one and the same. Our children's Bible rests against the Ramayana on her bookshelf. We pray to God at night but haven't fully fleshed out His character or discussed how He is different from Ganesh and Lakshmi and, now, Baby Jesus. For her, religion is more mosaic of characters and story lines than it is a set of tenets or beliefs. And, so far, that is all well and good. She believes and not just in magic elves, she believes in gods and goddesses and babies born in stables. And she doesn't question. She's not at the place yet where she will try to resolve these disparate pieces. So we've been living in a world where God is everywhere and Ganesh rests above our door (and Buddha sits outside it). We pray and we give thanks and we work hard, all of us, to grow better at compassion and kindness and love.

As it turns out, answering the "how" is pretty easy too. Encouraged by her questions, this year we set up a nativity in our home for the first time. I bought a book of advent stories and we read one each morning. Next week, we'll take a hiatus from the excitement and anticipation and mind-numbing countdown of hours and we'll go to Mass on Christmas Eve. As it turns out, I worry about the "how" far more often than I should because the truth is, she'll always show me how.

There are gaps and someday, she will need more. He will too. We'll have to give them more or help them find it on their own. But as I've watched her this year, making diyas and asking me for a dreidel and gazing up at our nativity, I've begun to feel better about it all. In fact, I've started to love this wild faith we're creating. Don't tell 10-year-old me, who knew only Sunday mornings bowing to Jesus on a cross, but I love weaving the vibrant fabric of dozens of deities into the cloth of my own faith. I think it's coming along quite nicely.

As for the what -- what will it mean to her -- well, as I've come to realize this year, that one is up to her.

More:
MotherhoodHolidaysParentsInterfaithreligion
Newsletter Sign Up
Raise the kind of person you'd like to know
Subscribe to our parenting newsletter.
Successfully Subscribed!
Realness delivered to your inbox