The jazz legend (1917-1993) would have turned 93 years old today and Google has honored the famed trumpeter with a colorful, celebratory Doodle on its homepage (See below).

Dizzy was born John Birks Gillespie in 1917 in South Carolina. When he was 14, he moved to Philadelphia, where he started playing professionally. When he was a swing musician, he picked up the nickname "Dizzy," and it stuck. During his career, he helped start the bebop and Afro-Cuban styles of jazz. Gillespie even ran for president after a joke went too far in 1964 -- the [sic] would would have been a lot cooler with him in the Oval Office. [...] Gillespie died of pancreatic cancer in 1993. He was 75.

Gillespie was known for his trademark "bent" trumpet, with a bell that lifted at an angle rather than sitting straight (See it in the video below). Allegedly, the trumpet was damaged accidentally when someone sat on it, but Gillespie liked the sound produced by the altered instrument, and so he kept it.

Listen to some of Gillespie's performances below and vote for your favorite. What's your favorite Dizzy song? Share it in the comments section. 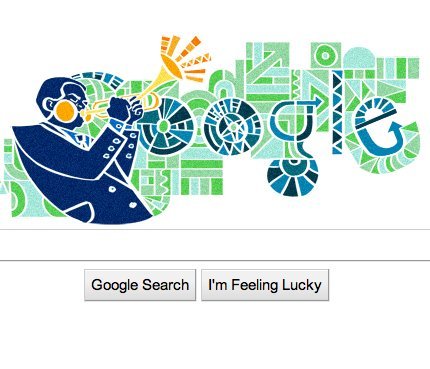