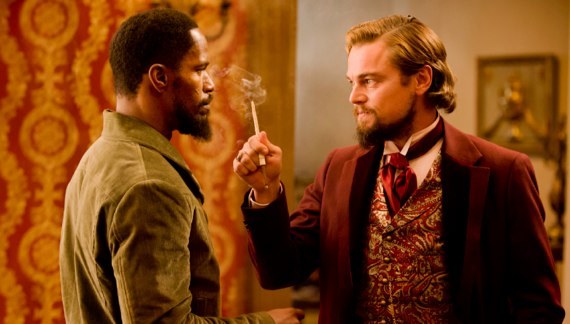 Quentin Tarantino's Django Unchained is, perhaps, the most anticipated movie of the season because, well, it's a movie directed by Quentin Tarantino and people like his movies. With two more ados before we start, the movie stars Jamie Foxx and Christoph Waltz as men hunting bounty in the old South a few years before the Civil War. With one more ado, it also stars Leonardo DiCaprio as a plantation owner who happens to own Django's wife (Kerry Washington). Are there any further ados? There appear to be no further ados. So, with no further ado, we answer every question that you could possibly have about Django Unchained.

Q: Who is Django?

A: Django (Foxx) is a slave who is freed at the beginning of the film by a German named Dr. King Schultz (Christoph Waltz).

Q: Why does Schultz free Django?

A: Schultz is a bounty hunter and Django just happens to be in the position of being able to identify three men - the Brittle Brothers -- that Schultz is currently pursuing.

Q: Is the rest of the movie Schultz and Django chasing down these three men one at a time?

A: The film kind of sets it up that way because the three wanted men used to own Django and his wife, Broomhilda (Washington), and a lot of atrocities occurred during that time period.

Q: So Django Unchained is a tale of revenge? Like Kill Bill?

A: Perhaps these similarities occurred to Tarantino, which is also perhaps why the Brittle Brothers situation is resolved relatively early in the film on a plantation owned by "Big Daddy" Bennett (Don Johnson). After, Schultz enjoys working with Django so much, Django is offered the job of Schultz's bounty hunting partner.

Q: Why would Django want to be a bounty hunter?

A: To earn enough money so that he can at least make an attempt to purchase Broomhilda from a man named Calvin Candie (DiCaprio). Candie happens to be a pretty nasty scoundrel who wagers on slaves who fight each other to the death. A slave who refuses to fight sets up the most disturbing scene I've seen in a theater this year.

Q: Do Django and Schultz simply make Candie a financial offer for Broomhilda?

A: See this is where things go off the rails a bit. Instead of simply trying to purchase Broomhilda, Schultz devises a somewhat harebrained scheme in which he and Django pose as a party interested in purchasing a slave for fighting. The problem is, even though this convoluted plan is fully explained, it's still based on assumptions that Django and Schultz really have no reason to believe are true.

Q: Then why hatch such a convoluted plan?

A: Because if the plan weren't convoluted, this would have been a 90 minute movie.

Q: Was Christoph Waltz revitalized by working with Tarantino again?

A: After winning an Oscar for portraying Col. Hans Landa in Inglourious Basterds, Waltz has been somewhat of a lost soul, appearing in subpar films like The Green Hornet and dreck like Paul W.S. Anderson's The Three Musketeers. Here, Waltz is back at the top of his game and is a joy to watch.

Q: How many The Three Musketeers references does Christoph Waltz make during Django Unchained?

A: One. And, luckily, it was a reference to the book and not that terrible Paul W.S. Anderson movie.

Q: How is Leonardo DiCaprio's performance in Django Unchained?

A: I can't remember watching DiCaprio have this much fun in a role since Catch Me If You Can. (Though, as an aside, be warned that DiCaprio doesn't show up until at least an hour into the film.)

Q: I saw Jonah Hill in the trailer for Django Unchained. Does he play a major role?

A: Jonah Hill has about three minutes of screen time in Django Unchained. But he does happen to be in the best scene in the film.

Q: Does Django Unchained live up to the hype?

A: That really depends on what your individual level of hype is before seeing Django Unchained. If it's very high, the chances are you will be somewhat disappointed.

Q: What are the problems with Django Unchained?

A: Django Unchained just feels overly bloated at 2 hours and 45 minutes. Most specifically, again, when Django and Schultz are in the midst of their grand scheme to fool Candie, it just feels like wasted time watching a plan that we, as an audience, get the feeling isn't going to work anyway. Honestly, there's a tight 120-minute movie in there, somewhere.

Q: What deleted scenes will be on the Django Unchained Blu-ray?

A: I wouldn't be surprised if it's just a video of Quentin Tarantino saying, "Sorry, gang, nothing to see here. I used them all."

A: Between the gore, the torture and, most disturbingly, the language - yes. And when I write "language," I'm not talking about a word like "fuck." I'm referencing the language that was used in 19th century United States - and, yes, it's excessive.

A: Without giving anything away, strangely, even after all that ... yes, it is.

A: Even while bloated, there's still more than enough good in this movie to warrant me answering "yes" to that question. So, yes, you will. It's worth seeing for the performances alone.

Q: Could anything you have written in that last sentence have stopped me from going to see Django Unchained?

A: Samuel L. Jackson. Good grief, is he great. Just the look on his face half of the time had me laughing.

Q: Who was the last person you expected to see in Django Unchained?

A: Tom Wopat, who played Luke Duke on The Dukes of Hazzard.

Q: What's the last thing you expected to hear during Django Unchained?

A: A Jim Croce song.

Q: The role of Django was originally written for Will Smith. How many times has Will Smith kicked himself today for passing on this role?

A: Even with the film's flaws, Django is still a pretty juicy role. So, three times today.

A: Yes. An extremely short scene.

Q: Should I wait through the credits to see this post credits scene?

A: No. Please trust me on this one. You've spent enough time in theaters over the last few weeks. Go out and live your life - it's slipping by faster than you think. (Note: I may be just talking to myself in this answer.)