For anyone who worries that "Saturday Night Live" doesn't take enough risks, we will kindly point you in the direction of "Djesus Uncrossed," which puts Jesus Christ in a Quentin Tarantino-directed, ultra-violent revenge flick akin to "Django Unchained."

The "SNL" parody is sure to offend many Christians, who may be put off by the first "SNL" of the Lent season depicting the Son of God as opting to not sit at the right hand of the Father after rising from the dead, and instead kicking the asses of those who crucified him.

Breitbart.com wasted no time in branding the sketch as "controversial" only hours after it aired. World News Daily called the video "obviously offensive," and made an argument echoed by several HuffPost commenters and readers, that a similar parody involving the Prophet Mohammed would not be tolerated.

But the sketch received attention from beyond the right-wing media. The Los Angeles Times questioned whether the sketch was "the most blasphemous in 'SNL' history." Slate took a slightly more optimistic view, calling the sketch "one of their more amusing bits of blasphemy in quite some time."

The story departs from the Bible's take of the Resurrection after Jesus -- er, Djesus (played here by "Django" co-star Christoph Waltz) -- leaves the cave where his body lies, and instead of ascending to heaven, he goes off to kill as many Romans as possible.

"He's risen from the dead, and he's preaching anything but forgiveness," the narrator states, with images of Jesus killing Roman soldiers in the background.

Between this sketch and "Lincoln," with Louis C.K. as a sad-sack version of the 16th president, "SNL" has been on a roll when it comes to historical martyrs inserted in modern entertainment parodies.

Did "Djesus Uncrossed" go too far? Answer in our poll below.

UPDATE: This post has been updated to include reactions to "Djesus Uncrossed" throughout the media. 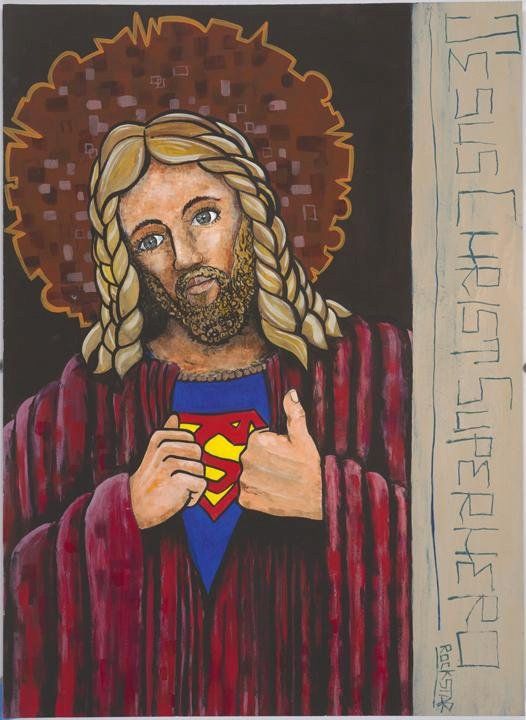 1 / 37
Superman Jesus
To a lot of people, jesus is a superhero.
<a href="http://www.etsy.com/listing/113648697/jesus-christ-super-hero?ref=sr_gallery_42&ga_search_query=jesus+painting&ga_view_type=gallery&ga_ship_to=US&ga_page=8&ga_search_type=all">Etsy</a>