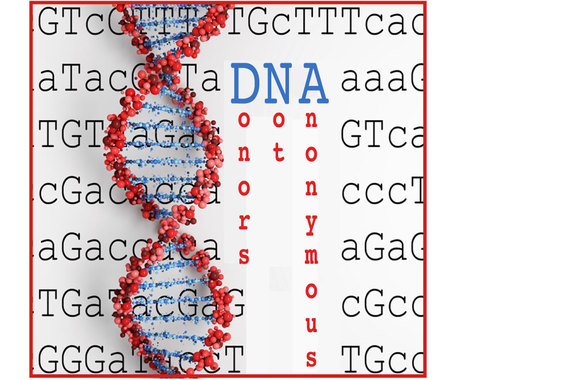 I can't help but wonder when the sperm banks and egg clinics will start acknowledging that there is no such thing as guaranteed donor anonymity. I addressed this issue in my recent Huffington Post Blog, and it has been written about many times over the past ten years, starting with a New Scientist article from 2005 about a boy locating his donor after submitting his DNA to a commercial DNA website.

A quick review of some of the largest sperm banks and egg clinics finds that not one of them mention in their donor recruitment materials the ease with which, and the growing frequency of donor-conceived people identifying their donors via DNA testing. This is now a regular occurrence.

Many egg clinics not only offer anonymous donors, but actually require anonymity for all involved. Because egg donor children are now getting to the age where they are starting to get their own DNA tested, promised egg donor anonymity is also being shown to be a myth. New family finder type programs make connecting via y-DNA (surname connections) no longer the only way to find genetic relatives with DNA.

The DSR recommends DNA testing for it's members, but also many people come to the DSR because they only just found out through DNA testing that they were conceived using donor sperm or eggs. After confronting their parents about the news, they learn about which clinic or facility their parents used, and sign up on the DSR to connect with half siblings and/or their biological parent.

Last month I had a egg donor mom contact me saying that her 19 year old son had told her that he'd recently sent in a swab to have his DNA tested with 23andme, and was waiting for the results. It was clear that this boy had suspicions about his biological parentage. She was so frozen with fear that even with the impending DNA results on the way, she couldn't muster the courage to tell him the truth about the use of an egg donor. 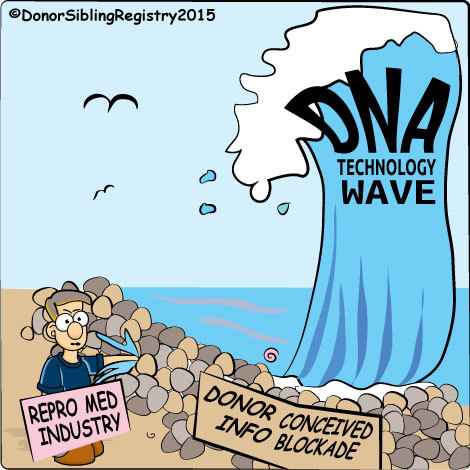 I see no educational materials on the sperm bank websites, for both donors and potential parents) addressing the importance of donor-conceived children knowing about about their genetic, ancestral and medical histories. Not one website pointed to the Donor Sibling Registry as a place to make mutual consent contact (unlike many egg clinics that now write the DSR into initial donor-recipient contracts so contact is established right from the get-go).

Both sperm and egg donors should know that they can share and update medical information, photos, and messages with families on the DSR at any time. This can be done without sharing identifying information, so if donors are not ready to establish relationships, they still have a vehicle with which to share information. And it goes both ways, as medical information about the children they have helped to create could be beneficial to them too, if they have, or are planning to have children in their own family.

This egg clinic not only promises anonymity on their website, but also explains why anonymity is used by most of their families. Not only is there a lack of education, they are misleading parents to think that choosing anonymous egg donor will keep an unwanted party from intruding on their lives. This misleading and incomplete information is given to parents as they make decisions that will affect their child for decades to come.

An anonymous donor is not known by you, the recipient. With anonymous egg donation, the egg donor's true identity (name and address) is kept confidential in order to ensure privacy and anonymity. Similarly, your identity will not be disclosed to the donor.

The majority of egg donations are anonymous donations. Many intended parents feel better knowing that their egg donor will not be involved during pregnancy, and as they raise their child.

One of the largest US sperm banks has this on their FAQ page for donors:

Is the program confidential?
Your anonymity is very important to us. All donor information is completely confidential. Online applications are submitted directly to your local facility, and we do not share your information with outside parties. Donor files are numerically coded to assure confidentiality. Access to files is restricted. Your identity will not be revealed to any recipient, nor shall the identity of any recipient be disclosed to you.

Donor Confidentiality
[Sperm Bank] takes great care to protect your privacy. Our donor and patient agreements clearly protect and release donors from any obligations and rights to any child that results from the donor's participation in our donor program. No identifying information is released to patients or offspring without your express consent and participation in the Identity Disclosure program.

And finally, from the sperm bank claiming to be the "largest international sperm bank":

.....heterosexual couples seem to prefer Anonymous sperm donors in order to protect the man's integrity as the father and thus their own family identity..

Sperm banks and egg clinics need to both address the issue of DNA testing, and how this affects the perceived and promised anonymity of sperm donors. Parents and donors need to be adequately educated and given accurate information. And of course, ultimately, all anonymous programs need to be abolished.

Additionally, I didn't see any information included on the sperm bank and egg clinic websites for donor offspring. Incredible that they have absolutely no acknowledgement or support for the very people they are helping to create.

*Full disclosure: As I was trying to explain (in person) how my son located his donor via DNA testing, this particular sperm bank's director responded by telling me that none of his donors would ever swab their cheeks for DNA testing and therefore would never be found. He could not understand (and therefore can not properly educate his donors) about the fact that a donor does not have to submit his own DNA in order to be found. He also told me that because of the DSR, his clinic was now offering "invisible" donors.

Toddler Dies After Being Found In Hot Vehicle Outside Tennessee Daycare

Bill De Blasio Back On Ballot

Snorkeling Discovery Proves Something To Smile About