CHARLOTTE, N.C. -- Ten undocumented immigrants filed off a brightly-painted bus here on Tuesday and walked to an intersection across from the Time Warner Cable Arena, where the first speeches of the Democratic National Convention would be delivered hours later. They walked out into a busy intersection downtown, sat down with signs that read "undocumented," and refused to get up.

Police quickly swarmed, surrounding the protesters from all sides as they stopped traffic. They didn't intervene, though, until an hour and a half later, even with the pouring rain. At first it looked like they might not disrupt the protest at all, but one of the protesters told an officer they wanted to be arrested to get their point across. After two warnings that they would be removed for impeding traffic, police stood the 10 protesters up one by one and put plastic zip ties around their hands. They led them to police vans to be taken to jail -- which, along with drawing the attention of passing convention-goers, was their goal.

The protest was the culmination of a six-week bus tour that started in Phoenix, Ariz., and ended at the doorstep of the biggest event of the year for the Democratic Party. In Charlotte, where President Barack Obama is attempting to court and turn out the Hispanic vote, the group was focused on his little-discussed (and politically unappealing) deportation record. During other stops, the bus riders went after Republicans for what they see as a much more hardline anti-immigrant approach.

More broadly, the protesters are part of a movement of immigrants who are choosing to "come out" as undocumented and dare the government to send them home. In most cases, they're left unpunished. But that doesn't mean pressure isn't being placed on politicians to reform immigration enforcement procedures.

The protesters were released around 5:00 a.m. Wednesday and now plan to go home. Yovani Diaz Tolentino, a 21-year-old born in Mexico, said after his release that his time in jail with his fellow protesters was a bonding experience, albeit a cold one. He plans to go back to Atlanta on Friday and return to school, while continuing to advocate for immigration reform using connections he made on the bus tour. 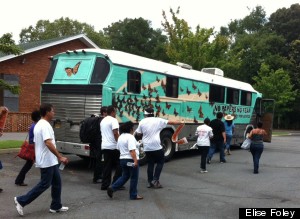 Protesters who would go on to be arrested leave a church for downtown Charlotte.

"Now we're more organized and we hope to move forward," he said.

Two hours before their arrests, the protesters' mood seemed equally determined. The 10 undocumented immigrants, five men and five women, joined a handful of other organizers and piled onto a large bus at 3:45 p.m. to make their way to the Democratic National Committee checkpoint. The bus was one of four making the trip across the country, though it was certainly the most visible. It's painted light turquoise and bears the words "No Papers, No Fear" in English and Spanish. Emblazoned all over it are Monarch butterflies, the group's chosen symbol because they migrate across three countries in North America. The butterflies were featured on most of the protesters' signs and T-shirts Tuesday.

On the bus, protesters sat across from each other on four couches, two on either side. They didn't seem nervous. They chanted each others' names and sang. When the bus neared its final stop, an organizer passed out socks and long-sleeved shirts for protesters to wear under their white T-shirts. "It's cold in jail," organizer Marisa Franco of the National Day Laborer Organizing Network explained.

The Obama administration deported a record 396,906 people in the 2011 fiscal year, and is expected to have a sizeable removal figure for 2012 as well. The president says his agencies are targeting the worst of the worst -- and they are now deporting more immigrants with criminal records than they did previously -- but organizers see enough detentions and deportations on the ground to know that plenty of people without criminal records still get caught in the system.

Some of them may be aided by the Obama administration's June announcement that it would halt the deportation of undocumented young people in certain instances. Although 1.7 million people may be eligible to apply for the program, known as deferred action, that's far from all of the nation's undocumented immigrants, and there are serious limitations that may lead to even young people being blocked from the process. Many of those arrested were middle-aged and aren't eligible for deferred action anyway. 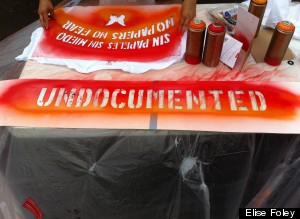 The group made signs for undocumented immigrants to hold as they blocked the street.

"We come here because we don't want Obama to be remembered as the president that deported more people than any other president in the history of the country," NDLON Executive Director Pablo Alvarado, one of the organizers, said at the Iglesia El Siloe church in Charlotte before the protest. "He has an opportunity to fix it."

The group didn't see the point in going to Tampa, Fla., for the Republican National Convention last week. Most Republicans have already voiced opposition to the type of immigration reform the protesters want, and GOP presidential nominee Mitt Romney has said he wants undocumented immigrants to "self-deport."

"We know where the Republicans are," Alvarado said. "We know they are not with us."

Late on Monday evening, the group held a meeting at the church. Organizers asked volunteers to step forward if they wanted to be part of the demonstration on Tuesday and 10 did, including a mother and daughter duo who later held a sign together as they chanted on the street.

The next day was spent planning. About a dozen people went to downtown Charlotte to scout their protest location and the path they would take to get there. Others remained at the church in a dreary indoor basketball court to make signs. 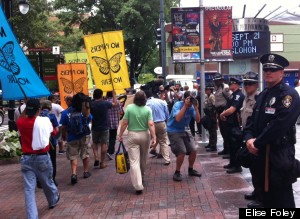 Protesters walk from the bus to a Democratic National Convention security checkpoint.

Around 2:30 p.m., the entire protest group -- more than 30 people -- went to the basement of the main church building to talk over final plans, mapping out the route on a chalkboard. The mood was solemn and occasionally tense. Their room adjoined another lined with air mattresses, where bus riders have slept since Saturday.

After the meeting, the group of 10 undocumented immigrants who would later be arrested formed a circle outside to talk about the specific action they would take. They practiced the movements over and over in the hot sun as others finished spray-painting shirts and got into vans to head to the convention area. Some protesters, both those planning to be arrested and others, wrote phone numbers on their bodies so they would know who to call if they were put in jail.

As the final two men were arrested, actress Rosario Dawson pushed through a crowd of onlookers to show her support, yelling into the organizer's loudspeaker that they were brave and she stood behind them. 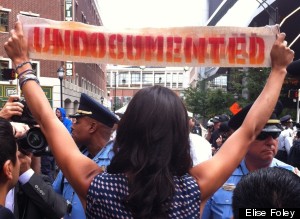 NDLON put much of its infrastructure behind the bus trip and has at least one person traveling with the group at all times. Alvarado has hopped on and off, but has still spent a significant chunk of the past six weeks with the undocumented group. Two decades ago, he too was undocumented after entering the United States illegally from Mexico. He received temporary status six years into his time in the country and is now a U.S. citizen.

"Coming out" as undocumented has its benefits. More visible undocumented immigrants are often passed over for detention and deportation, in part because they usually lack criminal records. But they also have a huge support system behind them that can make a fuss, which the government seems intent on avoiding.

That's hardly adequate protection. Protesters are largely focused on sending a message on behalf of undocumented immigrants who aren't as vocal. Geraldo Torres, a 41-year-old who was the last to be arrested on Tuesday, said the protesters try to take every chance they have "to stand up and speak out." Torres was born in Mexico and has been in the United States for about 20 years. He joined the bus on July 29 in Phoenix, where he lives.

"I think it's very important to really, really come out of the shadows and challenge those people that are not listening to us," he said. "We really want to get our point across."

See at the top a video from the protest by Krzysztof Piotrowski: