Standing on the floor of the Democratic National Convention was surreal. I am a formerly undocumented immigrant whose parents remain undocumented. And yet here, I was on the floor of a national political convention as it kicked off Monday. And unlike the Republican convention last week, I saw myself reflected in so many of the experiences of the people who spoke on stage.

The DNC had more diversity in its first hours than the RNC seemed to have in four days. It became apparent early in the night when mother and daughter Francisca and Karla Ortiz took the stage. Karla is an American citizen from Las Vegas, but her mom Francisca and her dad are undocumented and live in fear of deportation. Ortiz gave a moving speech in which she spoke about what it's like living in fear that her parents might be taken from her and that she hopes to grow up to be a lawyer in the hope that one day she can help immigrant families have a brighter future. In her closing, Karla said, "I don't feel brave every day. On most days I'm scared that at any moment my mom and my dad will be forced to leave, and I wonder what if I come home and find it empty?" 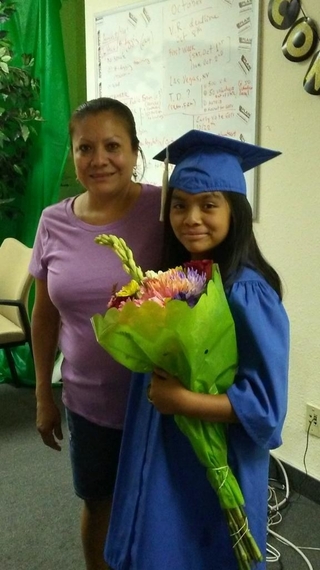 "Hillary Clinton told me that she would do everything she could to help us," Karla said. "She told me that I didn't have to do the worrying because she will do the worrying for me and all of us. She wants me to have the worries of an 11-year-old, not the weight of the world on my shoulders."

That moment spoke to me. I grew up undocumented. I know what it is like to live with the fear and anxiety as a child that at any moment you could be separated from your parents and feel the crushing weight of it on your shoulders.

Later in the night DREAMer and immigration activist Astrid Silva took the stage in front of a huge sign that read "NO HUMAN IS ILLEGAL", a common refrain in the immigrant community. Astrid spoke about her childhood experience living in the U.S. as an undocumented immigrant and the fear of having her family broken apart as they tried to pursue what the dream of all Americans, a better life. Astrid is now 28 and has overcome adversity to become one of the leading voices in the immigrant community. She has shown that our community can and will overcome the odds stacked against them. She closed her speech by warning of the dangers of a Donald Trump presidency and how important this election is in order to ensure that immigrant families like hers are protected.

It was so striking and empowering to see these Latino voices elevated in this convention, especially after hearing the battering that our community took last week in Cleveland.

The negativity, xenophobia and gloom that came out of Cleveland last week attempted to paint a dystopian society that blamed African Americans, immigrants and Muslims for violent crimes that threaten our way of life and security. It's such a stark contrast to the message of hope and unity coming out of the DNC in Philadelphia, where the Democrats seemed determined to show the nation and the world that the United States is better than that. The convention is focused on sharing the stories of all Americans and leading with compassion and dignity in order to move our political discourse in the right direction.

The voices of community members were aided by the repeated calls to denounce the bigotry of the Republicans and the calls for inclusion and compassion by party members.

In one of the most passionate speeches of the night, Congressman Luis Gutierrez, of Illinois, denounced Donald Trump's bigotry and spoke of how the example of hard work of his Puerto Rican parents gave him the foundation to pursue a seat in Congress. He reflected on how no one spoke up in defense of his parents when they faced discrimination and hatred.

Rep. Gutierrez has been one of the strongest voices in favor of comprehensive immigration reform and hearing his voice on that stage is a breath of fresh air for Latinos horrified by the anti-immigrant rhetoric that has permeated the American electorate discourse.

The high point of the night was definitely Michelle Obama's speech, in which she took down the Republican nominee without once mentioning his name. Instead, she showed why Democrats are the better alternative for all communities, especially those of color and those that are struggling.

She spoke about the difficulties of raising two daughters in the public eye and teaching her daughters "to go high" when your enemies "go low" with hateful language, such as extolling racist ideas or questioning their father's citizenship and faith.

The absolute most touching part of the speech was when she reflected on how far we have come as a nation. "I wake up every morning in a house that was built by slaves, and I watch my daughters, two beautiful intelligent black young women, playing with their dogs on the White House lawn." I, along with so many others in the great hall, was moved to tears.

It may seem simplistic, but it is true that hope beats anger any day and love trumps hate all the time. Mrs. Obama and the powerful speakers Monday night demonstrated that fact.

The first day ended on a buoyant note following a rocky start with the leak of the DNC emails and a protest by Bernie Sanders' supporters. The anger of the Bernie delegates was palpable as they booed in several moments of the night, but as Monday night drew to a close, there was a feeling of unity and focus in the convention. With each story of real Americans, we all understood that we have a goal this November to defeat fear, hate and xenophobia, but that we can only do it as a united front that embraces our diversity and leads with hope and compassion.

Thomas Kennedy is a writing fellow at the Center for Community Change Action and a writer for Law at the Margins. He is attending the Democratic National Convention this week in Philadelphia.