Two weeks of Republican and Democratic conventioneering concluded last night with President Barack Obama's speech accepting the nomination of his party. Whether one considered his speech brilliant oratory or just a good effort, in many ways it was typical of nomination acceptance speeches given by incumbent presidents in recent times.

To echo a recent theme, let's do the arithmetic.

Looking at convention acceptance speeches by both Republican and Democratic presidential candidates between 1980 and 2012, incumbents tended to receive more applause breaks from the crowd, mentioned their opponent less frequently and almost never mentioned their predecessor. For Obama, last night's speech was interrupted 75 times by applause, up from 67 during his speech in 2008. He mentioned his opponent Mitt Romney just once, whereas in 2008 he mentioned John McCain 21 times (the most mentions of an opponent by any nominee, Republican or Democrat, since 1980). And Obama did not mention his predecessor George W. Bush once last night, compared to eight mentions in 2008. 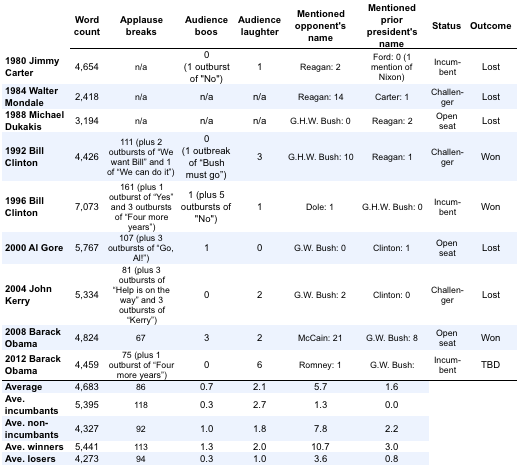 The only arithmetic departure from the norm in last night's speech was that it was shorter than Obama's 2008 speech by 365 words (8% shorter). Other nominees from both parties going back to 1980 gave longer speeches as incumbents than they did when they were challengers. President Clinton set the record on this score: his 1996 convention speech was 60 percent longer than his 1992 speech at 7,073 words (average is 4,683 for Democratic nominees).


EMBEDDING INSTRUCTIONS:
1. Customize your cloud's style by editing the CSS where it says CUSTOMIZE below.
2. Insert this code in its entirety into your webpage or blog post.

This code and its rendered image are released under the Creative Commons Attribution-Noncommercial 3.0 Unported License. (http://creativecommons.org/licenses/by-nc/3.0/)

For COMMERCIAL USE LICENSING, visit http://tagcrowd.com/licensing.html
-->

Moving from arithmetic to language arts, Obama's convention speech was consistent with the campaign objective of making the 2012 election a choice rather than a referendum. Using frequency analysis of the terms used most often throughout the speech, the words "choice" and "choose" appeared a combined 20 times, more than any other term or concept except for "America/Americans" which appeared a combined 24 times.

If anyone thought Obama's speech would be less "hopey-changey" than last time, they would be only half right. The speech was actually more "hope"-full (sorry, couldn't resist), in that the word "hope" was mentioned 14 times in his 2012 speech compared to four times in 2008. But of course, as the incumbent, he only mentioned change seven times compared to 17 times in 2008. Other prominent terms such as "believe" and "future" combined to create an overall optimistic narrative arc to last night's speech.

On a policy level, "jobs" was prominent, along with other employment-related terms such as "pay" and "workers." And in a pointed contrast with his opponent, Obama mentioned "war" nine times.

Word clouds show the 50 words most frequently used by each of the nominated Democratic presidential candidates at their respective conventions from 1980 through 2012. Visualizations were generated using TagCrowd.com.