In thinking about my earliest memories of elementary school, I remember being asked to bring a brown paper sack to class so that it could be decorated and worn as part of the Indian costume used to celebrate Thanksgiving. I was also instructed to make a less-than-authentic headband with Indian designs and feathers to complete this outfit. Looking back, I now know this was wrong.

The Thanksgiving Indian costume that all the other children and I made in my elementary classroom trivialized and degraded the descendants of the proud Wampanoags, whose ancestors attended the first Thanksgiving popularized in American culture. The costumes we wore bore no resemblance to Wampanoag clothing of that time period. Among the Wampanoag, and other American Indians, the wearing of feathers has significance. The feathers we wore were simply mockery, an educator's interpretation of what an American Indian is supposed to look like.

The Thanksgiving myth has done so much damage and harm to the cultural self-esteem of generations of Indian people, including myself, by perpetuating negative and harmful images to both young Indian and non-Indian minds. There are so many things wrong with the happy celebration that takes place in elementary schools and its association to American Indian culture; compromised integrity, stereotyping and cultural misappropriation are three examples.

When children are young, they are often exposed to antiquated images of American Indians through cartoons, books and movies. But Thanksgiving re-enactments may be their most active personal encounter with Indian America, however poorly imagined, and many American children associate Thanksgiving actions and images with Indian culture for the rest of their lives. These cultural misunderstandings and stereotypical images perpetuate historical inaccuracy.

Tolerance of mockery by teachers is a great concern to Native parents. Much harm has been done to generations of Indian people by perpetuating negative and harmful images in young minds. Presenting Thanksgiving to children as primarily a happy time trivializes our shared history and teaches a half-truth. And while I agree that elementary-school children who celebrate the first Thanksgiving in their classrooms are too young to hear the truth, educators need to share Thanksgiving facts in all American schools sometime before high school graduation.

Let's begin with Squanto (aka Tisquantum), a Patuxet, one of more than 50 tribes who formed the Wampanoag Confederacy. Around 1614, when he was perhaps 30, Squanto was kidnapped along with others of his people and taken across the Atlantic Ocean to Malaga, Spain, where they were sold into slavery. Monks in Spain bought Squanto, shared their faith with him, and made it possible for him to find his way to England in 1615. In England he worked for shipbuilder John Slany and became proficient in English. In 1619 Squanto returned to his homeland by joining an exploring expedition along the New England coast. When he arrived at the village where he has been raised, all his family and the rest of his tribe had been exterminated by a devastating plague.

What about the Pilgrims? Separatists who fled from England to Holland seeking to escape religious persecution by English authorities, and who later booked passage to North America, are now called "Pilgrims," though Americans did not widely use the term until the 1870s. In November 1620, the Mayflower dropped anchor in present-day Provincetown Harbor. After exploring the coast for a few weeks, the Pilgrims landed and began building a permanent settlement on the ruins of Squanto's Patuxet village, now renamed New Plymouth. Within the first year, half of the 102 Pilgrims who set out from Europe on the Mayflower had perished. In desperation the Pilgrims initially survived by eating corn from abandoned fields, raiding villages for stored food and seed, and robbing graves at Corn Hill.

Squanto was introduced to the Pilgrims in the spring of 1621, became friends with them, and taught them how to hunt and fish in order to survive in New England. He taught the Pilgrims how to plant corn by using fish as fertilizer and how to plant gourds around the corn so that the vines could climb the cornstalks. Due to his knowledge of English, the Pilgrims made Squanto an interpreter and emissary between the English and Wampanoag Confederacy.

What really happened at the first Thanksgiving in 1621? The Pilgrims did not introduce the concept of thanksgiving; the New England tribes already had autumn harvest feasts of thanksgiving. To the original people of this continent, each day is a day of thanksgiving to the Creator. In the fall of 1621, William Bradford, the governor of the Plymouth Colony, decided to have a Plymouth harvest feast of thanksgiving and invited Massasoit, the Grand Sachem of the Wampanoag Federation, to join the Pilgrims. Massasoit came with approximately 90 warriors and brought food to add to the feast, including venison, lobster, fish, wild fowl, clams, oysters, eel, corn, squash and maple syrup. Massasoit and the 90 warriors stayed in Plymouth for three days. These original Thanksgiving foods are far different from the meals prepared in modern Thanksgiving celebrations.

Squanto died in 1622, but Massasoit outlived the era of relative peace in colonial New England. On May 26, 1637, near the present-day Mystic River in Connecticut, while their warriors were away, an estimated 400 to 700 Pequot women, children and old men were massacred and burned by combined forces of the Plymouth, Massachusetts Bay and Saybrook (Connecticut) colonies and Narragansett and Mohegan allies. Colonial authorities found justification to kill most of the Pequot men and enslave the captured women and their children. Pequot slaves were sent to Bermuda and the West Indies. In 1975 the official number of Pequot people living in Connecticut was 21. Similar declines in Native population took place throughout New England as an estimated three hundred thousand Indians died by violence, and even more were displaced, in New England over the next few decades.

Looking at this history raises a question: Why should Native peoples celebrate Thanksgiving? Many Natives particularly in the New England area remember this attempted genocide as a factual part of their history and are reminded each year during the modern Thanksgiving. I turned to the Internet to find out what Native people think of Thanksgiving. Here are some of the responses:

I was infuriated when my daughter's school had a mock feast complete with paper mache headdresses and pilgrim hats!

When they did that 2 my kids in elementary I TORE those items up and signed my kids out of school for that day.

Someone took a picture of me in front of the class and to this day...it bothers me. Don't get the whole making a fest in school.

Tonight I have to lead a children's Bible class, and they want me to theme it around Thanksgiving. I will, but it's not going to be about the happy pilgrims and all that stuff. Thankfulness to God is one thing, but elevating pilgrims to hero status is out of the question.

When my daughter Victoria was in grade school she had a teacher give them the assignment to write a report on Thanksgiving Dinner, and Victoria wrote hers as to why our family doesn't celebrate Thanksgiving. Victoria got an F on the paper, and I threatened to go to the school board if the principal didn't get it changed. Victoria got an A and the class got a lesson on Native American heritage.

Ignorance and not near enough education in the school systems! It is very sad that a majority of what is taught is very superficial and the dark aspects of our history are neatly tucked away. Very sad!

Considered a day of mourning in our house.

For skins [American Indians], Thanksgiving should be The Last Supper.

The United American Indians of New England meet each year at Plymouth Rock on Cole's Hill for a Day of Mourning. They gather at the feet of a statue of Grand Sachem Massasoit of the Wampanoag to remember and reflect in the hope that America will never forget.

Do I celebrate Thanksgiving? No, I don't celebrate. But I do take advantage of the holiday and get together with family and friends to share a large meal without once thinking of the Thanksgiving in 1621. I think it is the same in many Native households. It is ironic that Thanksgiving takes place during American Indian and Alaskan Native Heritage Month. An even greater irony is that more Americans today identify the day after Thanksgiving as Black Friday than as National American Indian Heritage Day.

Reprinted with permission from the official blog of the Smithsonian's National Museum of the American Indian. 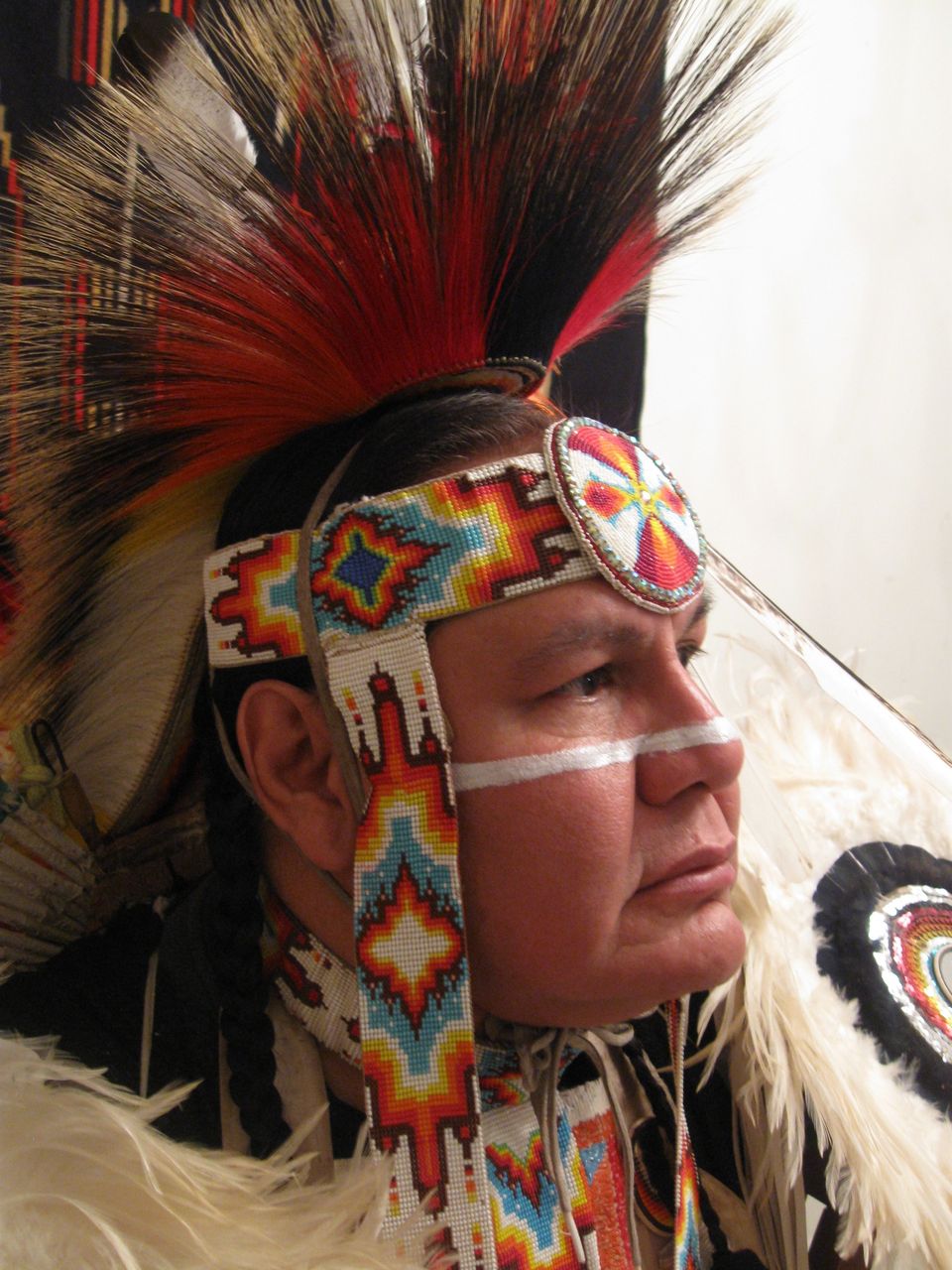