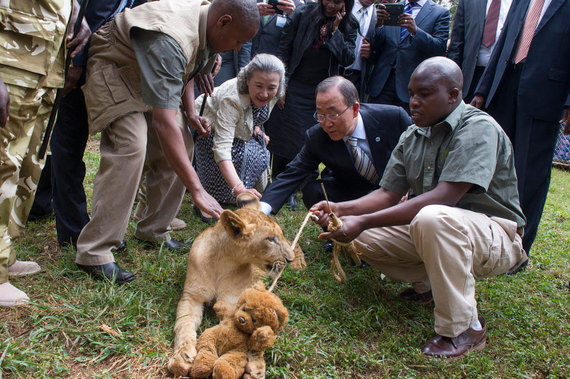 If the United Kingdom has an Ambassador to the UN, why not the "Animal Kingdom"? Animal welfare, biodiversity, wildlife crimes, and the rapidly evolving view of "animal rights" are and properly deserve an international discussion. Wildlife poaching or the inhumane treatment of animals do affect the global community or in the least, perspectives that peoples have of each other as well as fellow animal creatures. However, is it time for someone to speak on behalf of animals?

Exploiting animals for food, labor, or even as our companions nonetheless requires from us a recognition beyond our mere needs. In parts of Asia they eat dogs and cats, but perhaps I have a cultural prejudice. In the Christian, Islamic, and Jewish cultures we kill cattle for consumption. At the Yulin Dog Meat Festival in China, killing is a celebration not borne out of hunger, necessity, or tradition -- it started only in 1995 with China's consumer society rise.  The dogs are beaten and boiled alive for presumably the more flavorful and traditional consumption.

Of course, in the West we transport chicks in such inhumane conditions that they are in fact cooked alive even before slaughter. "Industrial farming" delivers horrors at a systematic scale with questionable human health and efficiency considerations. Elephants are killed in Africa solely for their tusks to be fashioned in Asia presumably as adornments for empty human lives. Whales continue to be hunted in the name of science and tradition, somehow neither rationalization worthy of the cost. The homes of the orangutan (forest person) are rapidly eradicated to cultivate cash crops, including cheap palm oil. We could continue with examples that make almost every country and peoples complicit in outright abuse/misuse. This is not about promoting a vegetarian or vegan style. Rather, the suffering inflicted is frequently unnecessary or borne out of convenient ignorance. In each situation there are also animal rights and/or welfare activists, the conscience and voice for those who cannot speak for themselves; and as in China, they represent the future of a society looking to a world defined by global communication and cooperation.

We cannot involve animals in the direct conversation but nonetheless can move forward the discussion among peoples. Within the United Nations roster of agencies and institutions, poaching and biodiversity are already identified as shared interest. The health/safety of animals in the food chain and the over-exploitation of our oceans are also on the agenda, at least in words if not always in deeds. There is a nascent discussion regarding the humane treatment of animals. Along with the various multilateral institutions, civil society has become engaged, but not necessarily with complementary agendas. See our previous article: "Is Animal Rights the Next Human Rights?"

There are civil society initiatives to put animal welfare and/or rights on the UN's agenda. However, there is little agreement on what that means and no particular urgency among member states to move ahead with formal resolution. (UN Security Council and General Assembly resolutions need member state sponsorship.)

Starting the Conversation about Animal Welfare/Rights even before Representation:

Special Representatives, Rapporteurs, and Experts are regularly appointed by UN Secretary General and other UN organs to review, inform, and advise on a broad range of issues, from human rights concerns, to outer space cooperation. (There is a post dubbed the "Alien Ambassador" but in actuality leading the UN Office for Outer Space Affairs.) The precedent of seeking input from both governments and civil society would serve a more comprehensive approach to animal welfare/rights alternatives. From political and economic considerations to religious and science leaders, we must be educated beyond old assumptions. Empathy and humanity are now being redefined as such relate to animals. There is no linear approach and International cooperation will ultimately be needed to bring into force any agreement that may be reached on paper.

Measures to Enhance Standing of Animals:

At least at the outset, this does not mean that animals will have their own ambassador as a member state. Rather, the designated post or Special Representative would seek to represent human perspectives on animal welfare and/or rights. Nonetheless, several concrete steps could be undertaken more promptly even if the discussion might be indefinite to help mankind address evolving scientific and ethical considerations:

---Define poaching and other crimes against wildlife including illicit trade as violations that could be prosecuted by the International Criminal Court (ICC) on complementary basis with national courts. Illicit wildlife frequently also includes grave violations of international humanitarian law, from child soldiers to systematic sexual abuse.

-- Develop review process, (similar to UN Human Rights Council evaluation for member states), that would assess the compliance of states with relevant standards consistent with whatever criteria have been adopted by international agreement. Here again, civil society can assume a more active role as it does in review of Member States' human rights situation.

-- Undertake effort to imprint a culture that respects animal life and environment beyond its possible human exploitation. There is no pleasure in killing another animal, and such promotion of empathy would also enhance respect for human rights.

Who will Stand for Animals before UN & International Courts?

The recent decision by the International Court of Justice against Japan's whaling program reveals how the legal process may provide direction, and also, unfortunately, perhaps how states may still opt to selectively apply and/or ignore the "rule of law." (Japan's Government has announced its intention to circumvent the ICJ ruling.) That case before the ICJ was brought by Australia, and all cases before that international tribunal require a state to be initiator/plaintiff, as any resolution at the UNSC and UNGA also necessitates Member State sponsors. In the future though, this may be ripe for change. The UN has developed beyond the original creation as solely a club of states.

The UN and its various organs are already transitioning into representing the interests of the "global citizen" as well member states. It is a delicate process that arouses suspicions in member states such as China and mistrust among a segment of the American public. As a matter of animal welfare/rights, cruelty/abuse should have the same meaning for a dog in China as the U.S. Identifying animals by their nationality stretches sovereignty -- people can be rabidly nationalistic but dogs cannot.

Should Animals be Able to Initiate Legal Proceedings & UN Resolutions?

Some legal systems are moving to facilitate animals as well as children - "minors" - to be independently represented in proceedings brought on their behalf. Why not accord similar status to animals before the ICC or ICJ or UN General Assembly, etc? If Japan decides to resume whaling, should a representative for whales be able to bring action or propose diplomatic/economic sanctions, without a state sponsor?

Even in the case of human rights, there is no standing before the ICJ; and in most organs of the UN, state action is needed for a formal resolution. Nonetheless, the UN Office of the High Commissioner for Human Rights has become ever more visible in at least highlighting concerns of grave violations of international humanitarian law. However, despite her vocal recent efforts to end impunity for war crimes in Syria, the current High Commissioner, Navi Pillay, has not overcome the parochial interests of the Big Powers (particularly Moscow and Beijing which vetoed referral to the ICC.) Can we expect the Office of the High Commissioner for Human Rights under the recently appointed Prince Zeid to evolve more in the direction of directly defending the rights of Global Citizens? Perhaps this overtime would also provide a model for those who would seek greater care for animals as also global citizens?

Animals are not on this planet because we created them, at least not most. They belonged to Nature -- God before us, and it will be our misdeed -- sin if they, any species, disappear because of us. Many species precede humans, but it does not mean that they are or should be on equal status with humankind. Nonetheless, as species and individuals they deserve greater standing beyond the whims of corporations and persons to exploit or trivialize for sport or pleasure. (Besides harvesting and hunting animals, in some countries, sexual abuse of animals is NOT outlawed.)

If for no other reason than to further respect among humans, we should encourage also a more inclusive global vision of animals. They may not be global citizens, but they do deserve standing and representation beyond narrow human whims and interests. Our shared earth, and all of us as humans, are made richer by their existence and empathy. Perhaps there will not be a UN Ambassador for Animals in our lifetime, but the conversation along with evolutionary thinking is already underway. Each one of us thus needs to be an Ambassador for those who cannot speak for themselves.