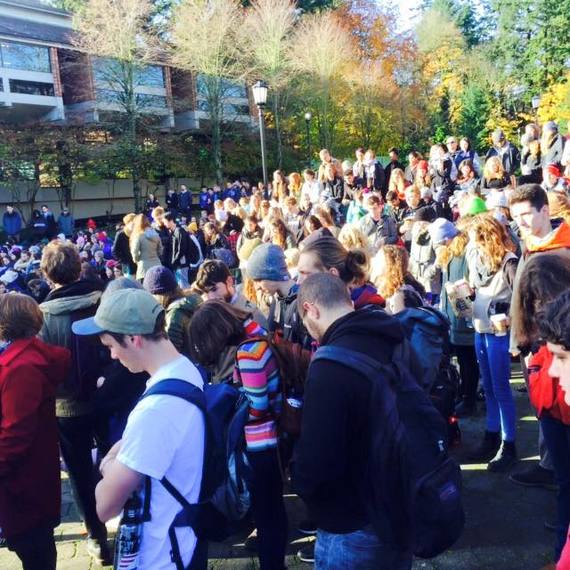 Racist threats and student protest hit Lewis & Clark College in Portland, Oregon this week amidst a national wave of student activism from Occidental to Amherst, Mizzou to Princeton. The threat came through anonymous social media Yik Yak posts declaring, "I just want to hang you ignorant black people" and "that black people think just cause their ancestors were slaves they deserve more. . . well in that case let's give them something to whine about #BringBackSlavery." 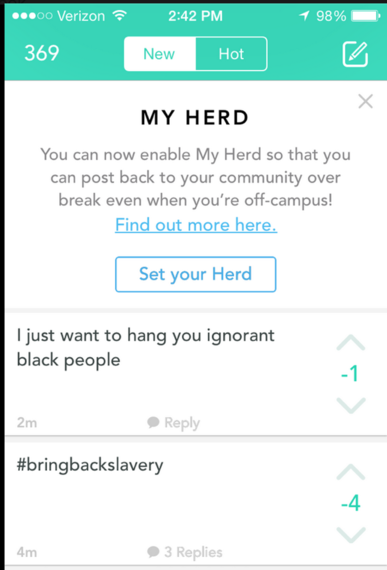 The Black Student Union at Lewis & Clark sprang into action, alerting students to the threat and informing college officials. The Dean of Students sent out a message to the campus community decrying the posts. On Wednesday, hundreds of students gathered outside of the library and held a teach-in about racism on campus, forming small groups to develop a list of concrete demands. Other groups of students marched down hallways and encouraged their classmates to leave class and join the demonstration.

The incident that sparked the campus-wide protest happened in a broader context of mobilization around the lack of diversity among faculty, the Western-centric content of the core humanities course, and the general feeling of alienation that students of color experience. The Yik Yak posts could be a response to a three-day symposium on race and ethnic studies held the previous week where issues of racism were discussed openly. In previous years, flyers for the Ray Warren Symposium on Race and Ethnic Studies were defaced and torn down by disgruntled students.

Students are right to be upset. There are only three black full-time faculty and zero Native American faculty out of 125 professors. The fact that I can count the number of non-white faculty on the fingers of my two hands is a serious problem. The curriculum is woefully lacking when we have no African studies or Asian American studies courses at the College. Students of color also complain that there are too few counselors to attend to their needs.

Over the nineteen years I have taught at Lewis & Clark, there have been periodic incidents of anonymous racist messages around campus, including swastikas scrawled in public bathrooms and anti-black graffiti on dorm room doors. While those previous incidents were disturbing, none of them was as direct a threat of violence as the Yik Yak post that expressed a desire to "hang" a specific group, ie. "black people."

Given what seemed like a direct threat, I imagined that the Portland Police would investigate to figure out who posted the message. Just last week when a person at Mizzou posted a message on Yik Yak that vowed to "to shoot every black person I see," the police immediately arrested the student who made the threat. Not so in Portland. The Portland Police claim the post were "general in nature" and represented "no immediate threat." The Police have done nothing to investigate the matter.

This inaction by the Portland Police comes at a time when the Portland Police Association have rented billboards all over town proclaiming "Having Enough Police Matters," an insensitive riff on the Black Lives Matters movement. Even as violent crime has been steadily declining across the nation and in Portland for two decades, the police are trying to stir up support for more hires. Yet their inaction over this incident raises a question about whose lives the police are really meant to protect.

When Justin Trudeau was asked why half of his cabinet was non-white or women, he said simply, "Because it's 2015." When will it be 2015 in Portland?