The Magnetar Trade was taught in the best business schools long before This American Life likened it to "Springtime for Hitler."

For those unfamiliar with the fraudulent scheme portrayed in Mel Brooks' classic movie and Broadway musical, The Producers, "Springtime for Hitler" was an enterprise specifically designed to fail. It was a play thought to be so insipidly tasteless that it would close on opening night, so the investors, who laid out cash far in excess of the play's actual production costs, would never question where all the money went.

New reporting in ProPublica offers hard evidence that Magnetar, a hedge fund group based in Chicago, had designed a series of subprime mezzanine CDOs that were all but guaranteed to fail. Magnetar made a bundle by doubling down on bets that its own CDOs, and similar financial instruments, would fail. This idea was not unique to Magnetar. Hedge fund manager John Paulson pursued the exact same investment strategy. The Magnetar story was first reported in the Wall Street Journal back on January 14, 2008, one day before John Paulson put Alan Greenspan on his payroll.

Magnetar protests that it was just a hedge fund that hedged its positions. In a written statement to ProPublica, it states that, "Magnetar's CDO investment strategy was based on statistical arbitrage and did not reflect a fundamental negative view of housing prices." The arbitrage investment strategy is highlighted in a case study developed by Northwestern University and marketed by Harvard Business School.

The Trickle Down Economics of CDO Equity

As the case study explains, "Magnetar focused on locating relative pricing anomalies that should profit no matter what happened in the market." There was a great disparity in market prices. The price of equity, at the bottom of a CDO's capital structure, was priced completely out of proportion to the debt. No doubt, part of this market inefficiency was traceable to CDO terminology, which tends to be Orwellian. The equity slice of a CDO, which is a tiny sliver at the bottom of the capital structure, is not "equity" as the term is used in plain English.

Elsewhere in the capitalist world, equity has a significant potential upside. Normally, we think of debt as attaining a return of principal and interest and nothing more, and if anything is left over, all of the upside goes to the equity. With a CDO, the equity slice has no real upside. The CDO itself is comprised of many pieces of loans, which will never pay out anything more than 100% of their principal and interest. And if some loans suffer a higher-than-expected loss, the other loans will never pay out anything extra to make up for that shortfall. In structured mortgage deals, "equity" is just another form of subordinated debt that is simply more subordinated that the investment grade slices, or tranches, sitting right above it. 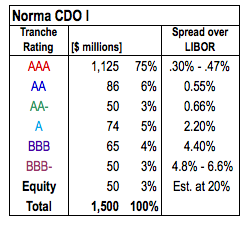 But consider the investments that Norma held. Subprime mezzanine CDOs held triple-B and triple-B-minus tranches in subprime mortgage bonds very much like this one, Structured Asset Investment Loan Trust 2005-HE3, which was referenced in an earlier post. 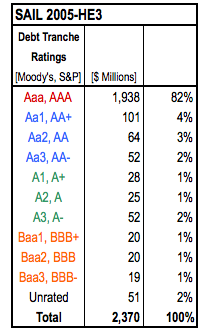 Quant people may protest this gross oversimplification, but they would miss the larger point. There is no way that anyone can slice and dice risk with that kind of precision, because the subprime mortgage market was known to be infected with fraud, and because the investments inside of Norma could be substituted from time to time. By simplifying the math, we see why these deals, which allowed scant margin for error, were fatally flawed at their inception.

Which brings us back to Magnetar's defense, first articulated in the Journal two years ago: "Mortgage analysts note that Magnetar's trading strategy wasn't all luck -- it would have benefited whether the subprime market held up or collapsed." Right. And given that the Norma CDO's closing date occurred long after delinquency rates had shot up, and right after the largest subprime originator, HSBC, withdrew from the market, and right before the second largest subprime originator, New Century, collapsed, who was to say whether or not the subprime market would have remained robust? Luck seems to have been removed from the equation.

Six Degrees of Separation Between High Finance and Common Sense

At the risk of going overboard with Broadway references, the Northwestern case study demonstrates how there can be more than six degrees of separation between high finance and common sense. Here's how the CDO market is described:

CDOs are designed to offer asset exposure precisely tailored to the risk that investors desire, and they provide liquidity because they trade daily on the secondary market. This liquidity enables, for example, a finance minister from the Chinese government to gain exposure to the U.S. mortgage market and to buy and sell that exposure at will. However, because CDOs are more complex securities than corporate bonds, they are designed to pay slightly higher interest rates than correspondingly rated corporate bonds.

CDOs enable a bank that specializes in making loans to homeowners to make more loans than its capital would otherwise allow, because the banks can sell its loans to a third party. The bank can therefore originate more loans and take in more origination fees. As a result, consumers have more access to capital, banks can make more loans, and investors a world away can not only access the consumer loan market but also invest in precisely the level of risk they desire.

None of this is exactly true. A Chinese finance minister, or anyone else, can gain exposure to the U.S. mortgage market through countless investment vehicles that are far more liquid and more transparent than any CDO. He could buy mortgage-backed securitizations--either guaranteed by government-sponsored enterprises such as Fannie Mae, or private label deals--that have traded in an active and liquid market since the 1980s. CDOs are highly illiquid because each one is almost impossible to understand.

CDOs are not precisely tailored to any particular risk. They are tailored to obscure risks. Regular mortgage bonds are static portfolios; what you see is what you get. Many CDOs allow for asset substitutions, as Bloomberg's reporting demonstrated so cogently. Also, many CDOs, especially synthetic CDOs, engaged in all sorts of less-than-arms-length side deals with the banks that underwrote them.

But did CDOs add liquidity to the marketplace? That is, did they enable financial institutions to offload their mortgage loans into the marketplace so they would have capacity to make new loans? Not really. The mortgage loans were financed through mortgage bonds, like SAIL HE-3. Some have argued that the CDOs were an essential component of the subprime marketplace, because there was scant investor demand for the lower-rated tranches of mortgage bonds, but those same tranches, repackaged into higher-rated CDOs, attracted buyers. It's just like the distinction between CDO equity and CDO debt, a triumph of form over substance. Except that really wasn't true for the Magnetar's CDOs. Magnetar invested in synthetic and hydrid CDOs, which did not necessarily acquire pieces of bonds, but instead issued credit default swaps. Those embedded credit default swaps enabled Magnetar to double down on its short positions.

The Northwestern case study unwittingly demonstrates one of the most important lessons of our age, one that was repeated ad nauseum last week during testimony before the Financial Crisis Inquiry Commission: Clever people can rationalize away anything.