Two British women are headed to court to argue for the right to wear Christian crosses at their workplaces, but a group of Christian ministers is reportedly set to back employers' rights to ban the regalia.

At the heart of the issue is whether or not the crosses are a "requirement" of the Christian faith.

According to a document leaked to the Telegraph that allegedly contains their arguments, the ministers are set to tell the court that crosses are not required by religious doctrine, thus supporting the government's case that employers cannot be forced to allow such symbols.

Nadia Eweida and Shirley Chaplin were both told by their employers to cover or remove the Christian symbol hanging around their necks. When they refused, they each faced consequences.

Eweida, a British Airways employee, was placed on unpaid leave in 2006 when she refused to remove the symbol, according to CNS News. She argued that coworkers of other affiliations were allowed to showcase symbols of their faiths. Eweida took the airline before a British employment tribunal alleging religious discrimination but lost the case.

The company eventually changed its uniform policy and rehired Eweida, but did not compensate her for the suspension period.

In Chaplin's case, the longtime nurse was reprimanded for refusing to cover up a cross around her neck, RT reports. She was subsequently assigned to desk work instead of her usual rounds.

Article 9, "Freedom of thought, conscience and religion," states the following:

1. Everyone has the right to freedom of thought, conscience and religion; this right includes freedom to change his religion or belief and freedom, either alone or in community with others and in public or private, to manifest his religion or belief, in worship, teaching, practice and observance.
2. Freedom to manifest one’s religion or beliefs shall be subject only to such limitations as are prescribed by law and are necessary in a democratic society in the interests of public safety, for the protection of public order, health or morals, or for the protection of the rights and freedoms of others.

Lawyers for the women allegedly plan to argue that right to wear a cross is covered under Article 9 as a "manifestation" of religious expression, CNS News reports.

But the British Foreign Office has already prepared the following statement, which was published in the Telegraph:

In neither case is there any suggestion that the wearing of a visible cross or crucifix was a generally [recognized] form of [practicing] the Christian faith, still less one that is regarded (including by the applicants themselves) as a requirement of the faith.

The case has been criticized by Archbishop of York, John Sentamu, who was unhappy officials were "meddling" in the matter.

Sentamu expressed his feelings on the BBC's Andrew Marr show, the Telegraph reports.

"My view is that this is not the business of government, actually," he said. "I think that is a matter really for people and that we should allow it.The government should not raise the bar so high that in the end they are now being unjust."

Andrew Brown, a blogger for the Guardian, questions what exactly qualifies as a "requirement" of the faith:

Check Out Other Banned Religious Practices And Customs 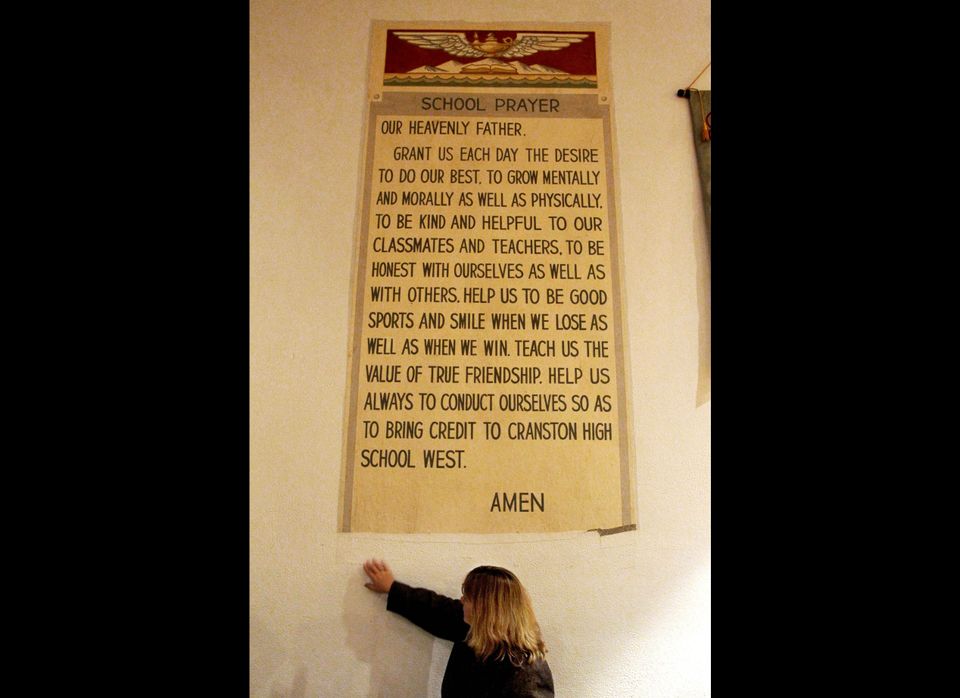 1 / 10
Prayer Banner at Cranston High School West
A federal judge ruled that a prayer banner at a Rhode Island high school, Cranston West, is unconstitutional. It has been removed. To read more on this, <a href="https://www.huffpost.com/topic/jessica-ahlquist" target="_hplink">click here</a>. Photo: In this Oct. 13, 2011 file photo, Cranston High School West administrator Kim Magnelli points to where a dedication plaque once stood under a prayer banner in an auditorium at the school in Cranston, R.I. The banner was removed after a ruling in a federal lawsuit brought by atheist student Jessica Ahlquist. The Cranston School Committee is set to hold a public hearing Thursday, Feb. 16, 2012 whether to appeal the ruling. (AP Photo/Steven Senne, File)
AP