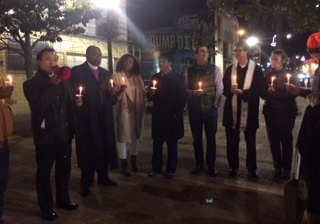 Candles lit, holding signs that read SPREAD LOVE, NOT VIOLENCE or COMMUNITIES AGAINST GUN VIOLENCE the group stood waiting to start. But nearly half of those expected were missing. It seems there had been a shooting several blocks away. One dead. A lot of police involved, traffic blocked.

This was on a recent wintry night in San Francisco, when a group from Grace Tabernacle Community Church in the city's Bayview-Hunter's Point neighborhood gathered for one of the regular vigils they have long held in memory of those killed by gunfire. It is a long list. The Bayview holds the unenviable record of having the most deaths and injuries from gun violence - by a large margin - of any area of San Francisco. It would be almost impossible to find anyone in the community who has not lost a family member, friend or acquaintance to gunfire; yet it is still home to generations of good people who continue to work for a better, even gun-free future.

Joining the Grace Tabernacle vigil group were a number of friends from Calvary Presbyterian church in the city's Pacific Heights neighborhood, an affluent community which holds the unenviable record of having the city's highest suicide rate. Some by gunshot.

Once the latecomers made it past the scene of the latest shooting, the group walked candles-aloft to a nearby corner where a young man had been killed not long ago. A collection of burned-out candles in colorful holders, some now broken, surrounded the parking meter at the spot where he had fallen; the police had given up on it and let the site remain as a memorial. His name was Otis. No one knows who shot him; possibly he was just in the wrong place at the wrong time. Grace Tabernacle's Bishop Jackson said a prayer and the group slowly moved on.

Occasionally they sang. (This Little Light of Mine . . . We Shall Overcome.) The wind repeatedly blew out candles, but there always seemed to be a flame somewhere. One candle-holder said to another, as she re-lit her candle by his, "I was shot in the shoulder on that corner a block away."

The day after the vigil, Liberty University president Jerry Falwell, Jr., presumably confident that no troubled person would ever be a student at Liberty, urged his students to arm themselves.

Also on that day the Senate once again failed to pass gun control measures, including Sen. Dianne Feinstein's bill that would have prevented people on terrorist watch lists from being able to buy guns with which to commit terror.

Several days later, some who had attended the vigil heard John Weems, at Calvary Presbyterian, address the issue of gun violence. Weems had been part of the vigil, and made a biblically appropriate metaphor of the candles being blown out by the wind, but constantly re-ignited. Darkness, he said, cannot overcome the light.

At the end of his sermon Weems lifted a stack of 8 x 10 sheets about three inches thick, and a few helpers distributed them among the congregation. There were 353 sheets listing the date, location and number of people killed or wounded in each of the mass shootings (four or more killed or wounded) in the U.S. this year according to the only-in-America website shootingtracker.com. Another 45 sheets bore the names of the known 2015 victims of gun violence in San Francisco, the city named for a compassionate saint.

It would be impossible to know how many firearms are in private hands in this country, but it's safe to say at least a few hundred million. Some of them - "assault weapons," "semi-automatic rifles," "sporting guns" by whatever name you choose - can kill more people faster than others; any of them can kill or maim. A wide range of weapons were used for the 353 mass shootings of 2015; all of them succeeded in wounding or killing human beings. The three sheets left to this distributor read:

It's hard not to think about how much darkness might be prevented by having a few less guns in the U.S. Those who know that darkness best continue to light candles . . . and hope. 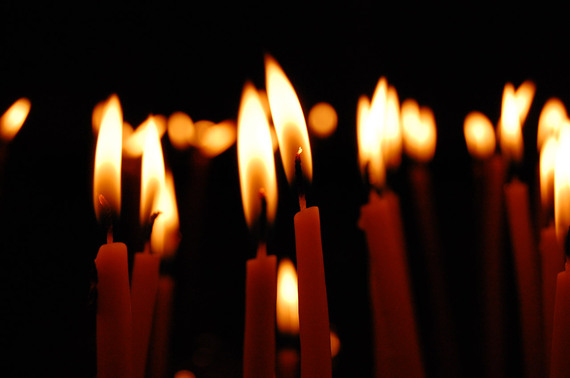