As America passes the second anniversary of the Newtown massacre, where 26 students and teachers lost their lives, one would have expected a greater support for gun control to stem the tide of such slaughters. But as with other cases of such gun violence, it has led to a greater push for more guns, not less. In fact, for the first time, a majority of Americans claim that gun rights are more important than gun control. 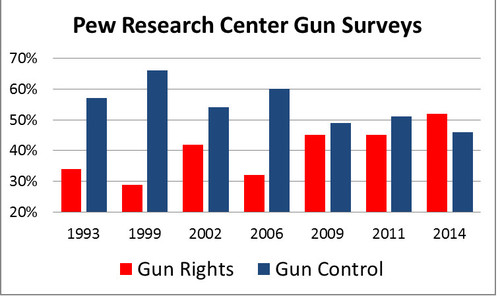 Research by the Pew Research Center found that in 1993, 57 percent of Americans supported "controlling gun ownership," while 34 percent found it more important to "protect the right of Americans to own guns."

As Congress signed a crime bill to ban assault weapons in 1994, the NRA and conservatives launched all kinds of criticism of President Bill Clinton and Democrats. But the number of Americans supporting the idea of controlling gun ownership climbed to 66 percent while those wishing for more gun rights fell to 29 percent.

That support was shattered as Eric Harris and Dylan Klebold murdered more than a dozen fellow students in Columbine High School near Denver, and a day trader killed his family and colleagues in an Atlanta suburb. Support for gun control slipped to 54 percent over the following years.

Nevertheless, support for gun control rebounded to nearly 60 percent, as these two tragic events were the only major spree shootings over the ten-year period. Only 32 percent said it was more important to protect the rights of gun owners. Yet President Bush and the Republicans in Congress let the assault weapons ban lapse in 2004. And we've had many more spree shootings in the decade since the assault weapons ban was rescinded.

Support for gun control plunged in the wake of the Virginia Tech massacre in 2007, which led to the deaths of more than 30 students and professors, including the son of one of my colleagues at LaGrange College. For the first time, supporters of gun control dropped to 49 percent, with 45 percent demanding more gun rights.

As the number of school shootings, workplace violence, and family massacres continued, support for gun control dropped as well. Gun control recovered slightly to 51 percent (with 45 percent opting for more gun rights) before the Denver theater shooting and the Newtown killing spree. Now, in December of 2014, only 46 percent support gun control, while a majority claims they want more gun rights.

Traditional explanations for these public opinion changes include views of President Obama, concerns about the crime rate, and the opinions of angry white males swamping other groups. None of these are supported by the evidence.

The increased demand for more gun rights predates the election of President Barack Obama. Sure gun control support increased as the overall crime rate fell in the 1990s, but also fell as the crime rate continued to decline in the following decade. And the Pew Research Center found that every group except for liberals and Hispanics boosted their support for gun rights, including women, blacks, college grads and non-college grads (and graduate degree holders), urban, suburban and rural dwellers, every age group, independents, and even Democrats, according to Emily Badger with the Washington Post.

Supporters of gun control have sought to highlight the vast number of shootings that have occurred in recent years. But while it seemed to make sense, it may not have been a good strategy. They need to highlight examples where tough gun laws reduced shootings. Otherwise, such publicity may only reduce support for gun control.