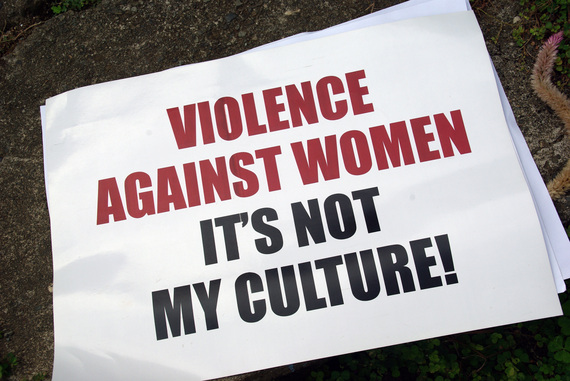 In our society, men are scared of vaginas. This fear of vaginas has led to men obsessively controlling and hating women. Sometimes, I wish men would stop obsessing about my vagina. The key word here is 'my' -- my vagina belongs to me, not to a man. Men hate women simply because we have vaginas instead of penises -- that is a fact.

I'm not a man-hating feminist, I'm simply stating the facts -- men are so threatened by women that they are willing to go to extreme lengths to control us and hate us so the system of patriarchy thrives and continues.

A friend of mine said it was "appropriate for women to cover up from head to toe to prevent men cheating."

I beg to differ. If men can't keep their penises in their pants when women walk by, why should a woman be forced to suffer because some pathetic little boy couldn't control himself? It's because a woman has a vagina that she's being told to cover up to "prevent cheating." We wouldn't say the same thing to men, now would we?

The oppression of women and girls by men is a pandemic stemmed from hate. Women in Nigeria experiencing domestic violence in their relationships are told to stay in their marriage because "they were lucky they found a husband." Amina Filali, a 16-year-old Moroccan girl was forced to marry her alleged rapist in order to preserve 'family honor.' It was only when this judgement culminated in Amina committing suicide that Morocco was forced to axe the law that allowed rapists to escape prosecutions if they married the woman they raped. I cannot believe that such a law would even exist -- surely that in itself is proof that men hate women?

The fear and obsession of vaginas and misogyny has led to heinous atrocities committed against women by men. In Iran, a woman's life is worth half a man's. At the age of thirteen, a girl can be legally 'married' to a 70-year-old man. There is no sensible reason other than misogyny which would allow a woman to be legally worth 'half a man'. Also, a 70 year-old marrying a 13 year-old is not 'marriage' -- it is statutory rape.

In Egypt after President Hosni Mubarak stood down, female activists were forced to undergo 'virginity tests'. In other words, doctors raped women while they claimed to look for hymens. Is that not misogyny? Why else would we humiliate women in such a manner if we didn't have some sort of an intrinsic hate for them? In South Africa, one woman is killed by a man every 8 hours. That equates to three innocent women being killed by their supposed lovers every day. That, my friends, is hate.

As we wait to see if Oscar Pistorius will be convicted of culpable homicide for murdering Reeva Steenkamp, we must remember the thousands of women who will be killed as a result of male violence and the world will never know their names. A man kills a woman and we are denying this very blatant fact -- that is misogyny.

It does not matter where you live -- misogyny exists and men are scared of and hate women. The power of women leads to so much fear that women are being oppressed and their rights are violated every day. It is sad that the potential of women and girls are being limited worldwide because they were not born with a penis instead.

To achieve gender equality, we must eradicate the fear of women and vaginas. We must ensure that men do not control women and we can no longer allow women to be treated inhumanely because men hate women. To get rid of the obsession with vaginas we have to tell men not to obsess with our vaginas unless we have asked them to and not to "man up", but to respect the rights of women and girls We need to teach our sons that women are not objects to be controlled, owned and dominated by men.