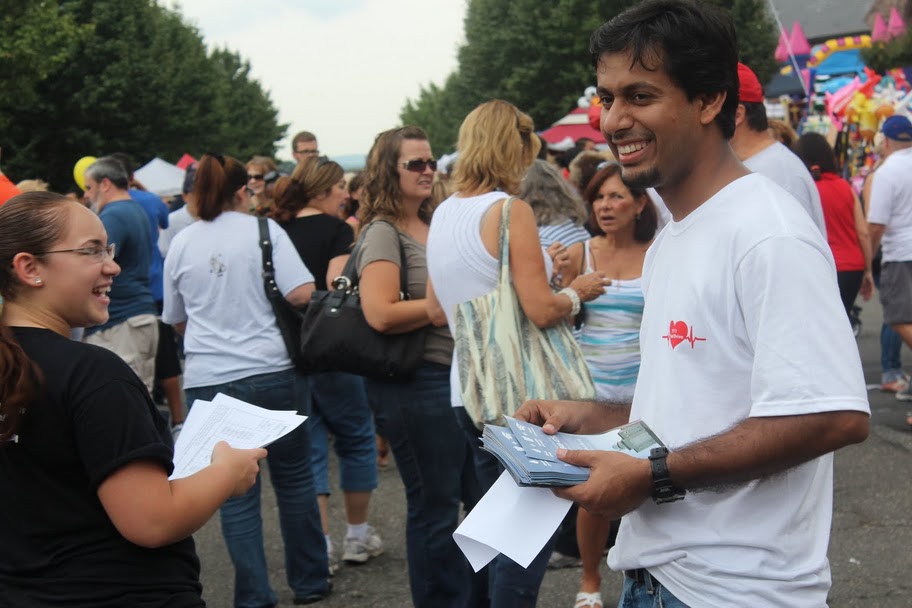 "First you bomb us and now you come suck our blood. What are you gonna do with it, drink it?" These were the words of a young man as he passed by me at the Labor Day Fair in Rutherford, N.J. I was passing fliers at the fair, asking people to donate blood at a 9/11 memorial blood drive hosted by the Ahmadiyya Muslim Community a couple of blocks down the street. This drive -- part of the "Muslims for Life" campaign -- was one of around 250 such events occurring across the U.S. this month.

This man's words did not just represent him alone; they represented a mindset which -- worrying as it is -- does not speak for the majority of Americans.

9/11 was a callous act of terrorism. Al Qaeda claimed responsibility for the enormous death and destruction that took place on that unfortunate day 10 years ago. But believe me, I am not an al Qaeda operative, and I did not, nor ever will, even come close to harming any human (or building). My faith prohibits violence and preaches peace. As a Muslim youth leader, all I have done my entire life is condemn acts of terrorism and openly speak up against all persons or groups behind them. Then why did Mr. Passerby blame me for 9/11?

The only thing obvious about my identity at the fair was that I was a Muslim. Did Mr. Passerby believe that Muslims endorsed 9/11?

The Holy Quran categorically rejects all forms of terrorism. It says, "Whosoever killed a person ... it shall be as if he had killed all mankind" (5:33). People familiar with world demography know that al Qaeda and other terrorist networks operating in the name of Islam form a very tiny minority of the world's 1.6 billion Muslims. Hence, they do not represent Islam; they attempt to hijack it to achieve their corrupt ends -- just as they hijacked planes 10 years ago. The Holy Quran (29:37) clearly prohibits Muslims from committing iniquity and causing disorder on earth.

Muslim American groups have always condemned terrorism aboveboard. The Ahmadiyya Muslim Community USA, for instance, ran the "Muslims for Peace" campaign this past year to counteract the suggestion that Muslims were either terrorists or sympathized with them. Such suspicion of Muslims in the years following 9/11 has led to a worrisome rise in incidents related to Islamophobia.

Mr. Passerby used the you-vs.-us argument. In doing so, he ignored the First Amendment. What he needs to understand is that in America, "we" are all equal under the U.S. Constitution, and on the tragic day of 9/11, all of "us" suffered equal pain. Muslim Americans are equally patriotic. The Holy Quran (4:60) instructs believers to obey their governments, and Prophet Muhammad went as far as saying, "Loyalty to one's country of residence is part of faith." The recent "Muslims for Loyalty" campaign hoped to raise public awareness of this very Islamic ideal: We, too, mourn the loss of those who passed on 9/11.

Just to be complete, I will address the latter part of Mr. Passerby's statement. Blood, Mr. Passerby, is collected by blood donation agencies and distributed to hospitals and medical centers in need of them. Every two seconds, someone in the U.S. needs blood. One pint of blood has the potential to save three lives. So, no! I am not going to drink the blood. And just for the record, the Quran (5:4) forbids consumption of blood.

I spent almost six hours at the fair distributing fliers with friends from the community. I came across many people who stopped and offered a word of praise. At the end of the day, our blood mobile had collected 32 blood bags. What this meant for me was hope. Where one person singled out an American community and openly blamed it for the acts of terror on 9/11, there were 32 others that openly considered Muslim Americans equally patriotic and American and equally affected by 9/11.

Mr. Passerby, you have forsaken the beautiful American values of tolerance, pluralism and equality. Just as al Qaeda is a very tiny minority that does not represent Islam, you are a minority that is not representative of America! 10 years after 9/11, the Rutherford Fair has confirmed to me that though a minority has been the cause of rising Islamophobia after 9/11, the vast majority of Americans have been brought together in service of the country.

There should be no doubt that like other communities, Muslim Americans are loyal peaceful citizens of America and equally mourn and commemorate 9/11. The "Muslims for Life" campaign is one example of such commemoration. The goal of the campaign is to raise 10,000 blood bags across the country and save 30,000 lives as a result -- 10 times more than the innocent ones lost on 9/11. The community has invited Americans of all backgrounds to participate in the campaign. By doing so, we will also renew our pledge to remain united as Americans and never let Mr. Passerby hijack our values!