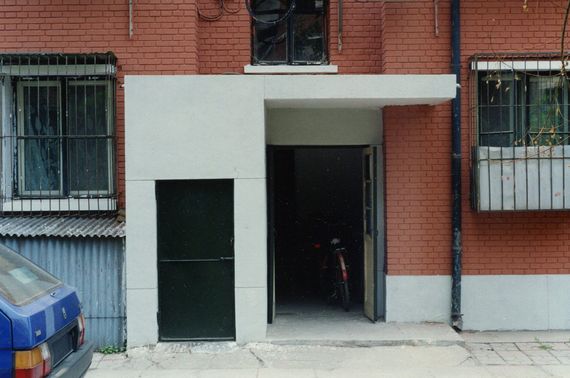 The first bike I ever loved was stolen from the ground floor of the building I lived in in Beijing in 1999, where she had been locked only to herself, the same as all other bikes in China. She was a beauty, a Flying Pigeon 2000, silvery and smooth with a ride to match. I came down one morning to find that someone had untangled her from the row of bikes that leaned against each other in the stairwell, lifted up her back wheels, and rolled her away.

I didn't have much experience with bikes, either riding or loving them. The very first bike I ever owned was only half a bike: a yellow bike with a banana seat given jointly to my brother and I by our best friends, who each owned one. I must have been around 8. My parents taught us how to ride but then only let us take the bike around and around the cul-de-sac we lived on in the suburbs. I loved riding but this got boring fast. If wheels symbolize freedom, this limited radius represented the exact amount of it I had as a child. It's no wonder that after college I'd flee to the other end of the world.

Transportation options were limited in Beijing: expensive taxis, overcrowded buses, a subway that barely went anywhere. Bike riding was the obvious solution. You've seen the photos: seas of blue Mao suits atop sturdy black Flying Pigeon bikes. By the time I arrived the Mao suits were mostly gone and the scene on the ground felt less than idyllic. Traffic lights, lane markings, one-way streets: all were suggestions more than anything.

Biking required one to confidently carve one's own path through the calamitous flow but I found myself a feeble biker. Balance, that magical ability to stay upright when being pulled in the opposite direction by inexorable forces, has never been my strong suit. Gravity, the pressure of living alone in a foreign city, the difficultly of starting a career as a journalist as a shy person, it all threatened to topple me over.

But once I took the plunge, I realized that unlike the blinkered solipsism of American drivers, all the moving vehicles in China were exquisitely aware of each other. I once saw a woman crossing through your average harrowing intersection when the baby in her baby seat popped out and splatted onto the road. Bracing myself for a scene of unforgettable gore, I instead saw the entire intersection freeze as if touched by a wizard's wand. The woman calmly dismounted, picked up the wailing baby and put it back into the seat, before the whole scene resumed again. 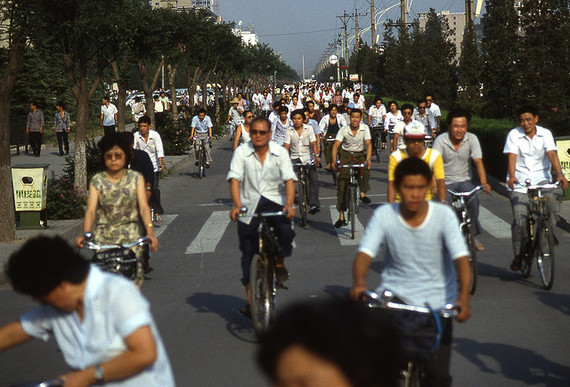 Beijing is perfectly flat, an ideal biking city. I had a leisurely twenty-minute ride to work, down broad bike lanes filled with people of all ages going all speeds, which made me feel part of a renegade bike gang with radically inclusive membership. Freed of the American need for speed, I biked like a granny, slow and unsteady. I could feel the road as it moved under me, the smoggy air on my face, the clear space of my mind. I was in touch with an elemental happiness.

And at end of my commute I cut a few minutes off by biking the wrong way down a one-way street, a market street geared towards Russian traders, and I'd switch gears and get out my daily aggressions by weaving around and swapping epithets with the traders careening towards me on tricycles piled high with furs. At night, I biked home from bars tipsy, through dark and deserted streets.

I mentioned to a Chinese friend how much I was enjoying biking and she agreed, saying that when you rode a bike in Beijing you just ronghe into the city. A verb halfway between melt and merge. My confidence grew, in all things.

After my bike was stolen, I couldn't bring myself to get another one. I overspent on cabs until a friend mentioned an abandoned bike in her stairwell. I reluctantly lifted its back wheels and rolled it to a repairman who cut the lock off for me. Blotchy green in color and hard to pedal, it filled my mind with muddy thoughts when I rode. 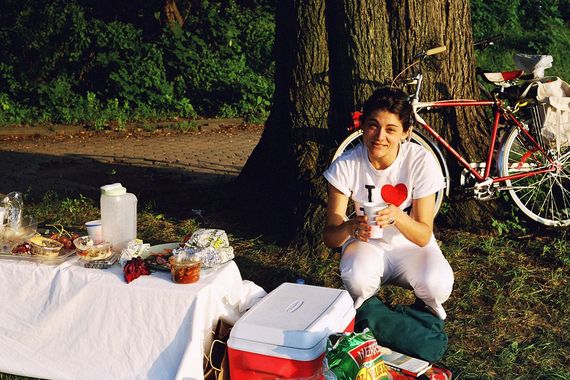 In Brooklyn several years later I bought a vintage candy red Royce Union bike with headlights and striped brake lines, sturdy as a Flying Pigeon, but I felt nothing. Ditto for a more practical Giant hybrid. Nervous to bike, I stuck to the easy streets of Brooklyn, secretly disappointed in myself for never daring to cross a bridge into Manhattan. I missed the bold self I seemed to have left behind in Beijing.

It was only when I went back to Beijing in the summer of 2008 that I finally dared to love again. She was a small orange Dahon folding bike whose touch on the pavement melted me back into the city. The subway was much expanded and at the closest station to my apartment, there was a fenced-in bike parking lot staffed by a man who slept in a little hut inside the lot and who would release my bike at any hour of the night. The streets were still relatively deserted at night and I biked home tipsy like in olden times. 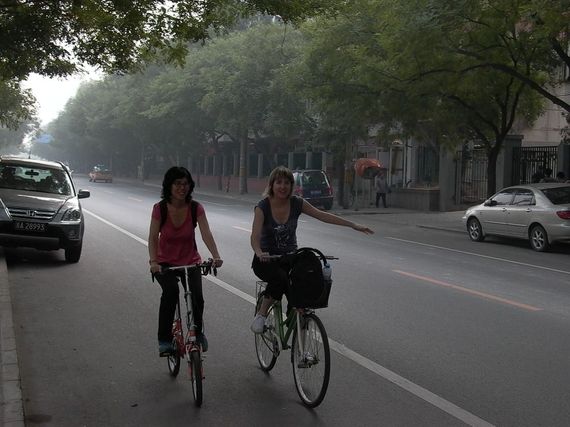 My little bike had CHINA DOMESTIC MODEL printed on the side, but when it came time to leave, I folded her up, stuck her in a box, and checked her as luggage, hoping to export my feelings home. I sold my other bikes.

But these days she mostly stays folded up in a bag in the closet. I live in Boston now, where the lawlessness of the traffic bears more than a passing resemblance to Beijing's, with none of its generous bike lanes, and I'm finally admitting that I'm just as afraid to bike as I ever was before going to China. Visions of getting doored, floored, and flattened are never far from my mind. I see now that I didn't change as much as I thought I had in Beijing. My biking skills didn't even improve that much. I'd merely been in a place that allowed me to be who I was. What a stroke of luck that was. 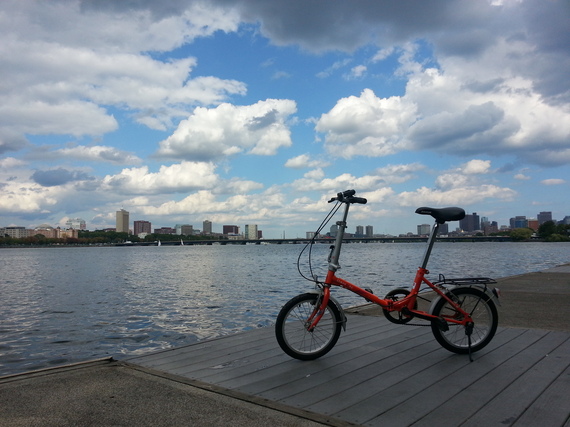 These days, I ride only on the Esplanade along the Charles River. It's flat and carless and calm and is the only place that gives me the feeling I bike to find, a magical sensation halfway between grounded and flying.

Author of BEIJING BASTARD from Gotham. Also the creator and producer of Planet Takeout interactive documentary.