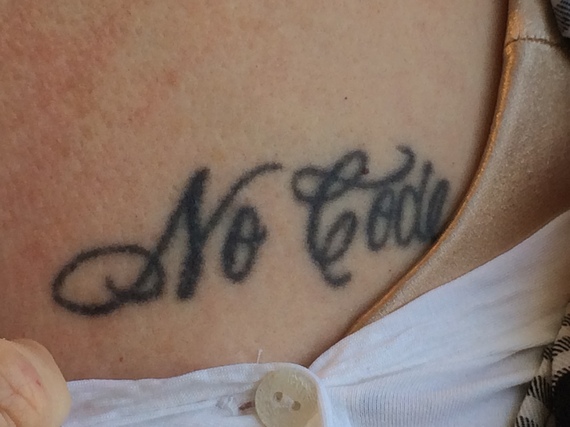 Getting a Do Not Resuscitate tattoo on one's chest is a threat I've heard made many times by fellow health care workers. It is a fed-up critique of our inexhaustible system of "do everything" medicine. The suffering we all witness can be grating to the bone. And many of us shudder to think that we too could be placed on the conveyor belt to nowhere, our loved ones helpless to stop it.

But I always thought it was a bluff. Until I met Mary.

At a recent conference on palliative care for medical professionals, I ate lunch at a table with several nurses. Like me, they were getting a lot from the conference, mostly in the realm of personal support. It's tough being a "talk first, act later" health care practitioner, surrounded by "do something!" colleagues. One can tend to feel like a naysayer, even a wimp, when cautioning against treatments whose benefits may not outweigh the burdens they will place on a vulnerable patient.

As we commiserated, one of the nurses said casually, "I have it on my chest. They're not touching me." She was the quietest one. I'd almost say prim. She paused, holding her turkey sandwich neatly over her buffet platter and took a swig of Coke. I thought I'd heard wrong. "You want to get a Do Not Resuscitate tattoo on your chest?" I asked, as one might say to a friend whose goal was to lose 50 pounds. You'd support it, but you knew it would never happen. "No, I have one," she said quietly, pulling her shirt aside modestly to show the skin over her heart muscle. I stared at it unbelieving. It was like a fantasy book animal never seen by human eyes. A unicorn. I honestly thought she would peel off the sticker and chuckle.

I stood up and walked around the table to her. I needed to see it up close. She too stood up and again revealed the tattoo. It was in a scripted font, lovely in its simplicity. Quiet, not too frilly, just matter of fact. "No Code" it said firmly. It was black, although she'd requested purple. The tattoo artist hadn't charged her for his mistake.

I asked her what had motivated her. Was this a cute reference to her chosen profession? A dare from a colleague? A hasty decision which she regretted? Was it just another piece in a whole collection of body work?

No, she said. She didn't like tattoos. She would not be happy if her daughter came home with one. She had considered this tattoo for years before she did it. She felt she had no choice. The thought of being trapped in an ICU on a breathing machine, unable to think or talk, her family helpless at the bedside, terrified her.

"My family knows what I want, but they may not be able to get it for me. You know how things can get going. I've got a medallion too." She pulled up her sleeve to show a medicalert bracelet that echoed the tattoo. "DO NOT RESUSCITATE. NO TRACH. ALRG TO PCN/SULFA." Her desire to avoid any form of life support even trumping avoidance of a drug which would kill her. A metal band around her wrist was not insurance enough for her. 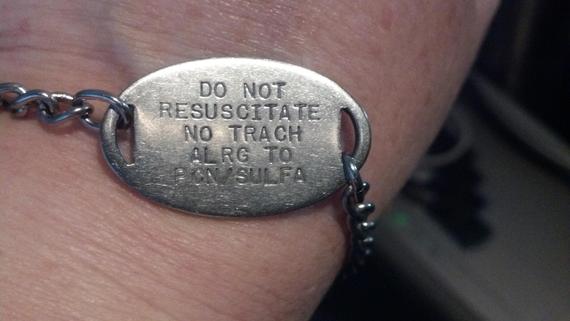 This mother of three, from the quiet suburbs on the other side of the tunnel, was fighting a revolution. Not the type the Beatles sing about, but quiet, private. A statement. An act of defiance. In most parts of her life she lived among the many, behind her white picket fence with her husband and three children. A place where there were no tattoos, no piercings, no loud music at night. But although she lived outwardly among them, she would do her best to die differently; her out-of-character tattoo hopefully acting as a barrier to unwanted medical interventions.

She respected the choices of others and did her professional best to honor their goals, even when they differed from hers. If the patients' preferences weren't clear, she would work tirelessly tirelessly alongside the doctors to prolong life at all costs.

As an ICU physician who also practices palliative care, I was conflicted. What if she had respiratory failure from a terrible pneumonia that may recede with the use of high-powered antibiotics, if given enough time? Wouldn't she want to be put on a breathing machine? What if she was hit by a bus and was hanging on by a thread? Wouldn't she want to have paramedics, ER physicians, and trauma surgeons do everything they could to bring her back? I wasn't even sure that first responders would honor the tattoo. But she was resolute. "If I'm that sick, I want them to let me go."

Although I'm still not sure how I feel about her choice, I do know that the act of making a choice itself is revolutionary. Most of us do not take an active role in determining our fates at the end of life. We subscribe instead to the myth of perpetual life, a comfort yes, but a fantasy nonetheless. Our doctors and nurses, like Mary, are well trained enact that myth and do so much of the time. And so with our eyes on the unattainable goal of perpetual life, our bodies are taken away on a conveyor belt of suffering.

Mary would fight for her beliefs. With her metal bracelet and permanent ink, she aimed to protect her body from the well-intentioned practitioners who might participate in a myth that she didn't ascribe to.