I remember seeing my grandpa's tattoos as a kid. They were hard to make out because of his weathered skin and the fact that the ink had bled over the years. They were badges of honor from war. I just remember looking at the huge green blot on his arm, trying to trace the lines with my tiny finger, thinking wow, that's pretty bad*ss -- and that I wanted to be cool and have one too. But, I also wanted the story and glory that came with it.

Twenty years and three tattoos later, I can't say I was ever a soldier in World War II, but I am still proud of the ink I've collected over the years -- in fact you wouldn't even know I had any had I not told you. If it's summer, though, you might see one peek out. Or, like last week, while I was on vacation in Miami. This is usually when I hear the comments. 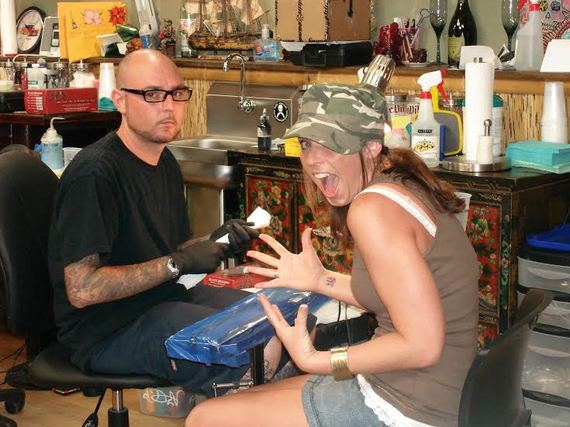 That's actually me -- getting a tattoo at the famous Miami Ink in 2006.

"How are you going to explain your tattoos to Maximo when he's old enough?"

What's to explain, exactly? As a parent you are either for them or against them, but regardless, your child is going to see them on the street. Do they expect me to tell my son Maximo that he won't go to Harvard or work on Wall Street if he has a tattoo? That's not true. I know many high-powered executives who have tattoos you wouldn't know about either. Would it be a disservice to my grandfather, who put his life on the line, to say his ink was evil?

I know that many people don't like them, including Maximo's grandparents, who find them disrespectful to the body. And I can understand where they are coming from as well. But I still think it's Maximo's decision to get tattoos or not. Will he be more interested in them because his mom has them? Maybe, but I think it will be a great way to open up and talk with my son.

It was also a part of my culture growing up. My family was all-American, growing in up small-town Pennsylvania: we fought wars, worked blue collar jobs and rode motorcycles on the weekends. Harleys, to be exact. We also had tattoos.

So what do you do if your child wants a tattoo?

Pick one out and let's talk about it. Why do you want it? Where do you want to get it? As long as it's not Daffy Duck on your cheek, I think we can work something out. I would rather have my son talk to me about them than sneak off at 15 and get his first one like I did. I literally hid my first tattoo from my mom for three years! Trust me, getting a tattoo before you're 18 is easier than you think.

I've always said: if you can hide it for work in a professional setting, then it's an OK tattoo. Personally, I like seeing someone at the beach reveal ink I never realized they had. It changes your entire view of that person, and makes you want to know more about them.

So, do I think parents with tattoos make bad role models? Quite the contrary.

Stephanie Barnhart is NYC Editor of the Mommy Nearest Magazine and founder of Football, Food and Motherhood.