My favorite sight during the protests of California's passage of Proposition 8 (eliminating the right of same-sex couples to marry) was a youthful looking guy wearing his nastiest face and carrying a sign that said, "No More Mr. Nice Gay!"

Suddenly California's streets were full of "kids" who felt entitled, a whole new population of beautiful faces who just assumed the right to marry was or would be theirs. After all, protesting and rallies, marches and demonstrations were "old." All that was for another generation. It wasn't sexy and it didn't sell. In fact, several advertising surveys I was presented with at the national news magazine I used to head, purported data that suggested younger readers/browsers (the "target audience" for advertisers) did not identify with "the struggle." It wasn't fun. Or at least advertisers trying to sell them fun things like drinks and cars and gadgets, didn't think struggling was a good match. Since advertising became the only road to staying in business at all (with newsstand, subscriptions, and the old model of charging a fee for website content, all failing), advertisers became not-so-invisible editorial advisers. I mean, God forbid, you should lose or offend one over something you wrote.

In general, advertisers prefer the blander lifestyle websites and print magazines. In gay media, they'd prefer not to be there at all. Anything about sexuality is controversial, and anything about our sexuality is, well,...run! Granted, it's much easier if the media niche involves fashion, food, nesting, tips, and travel. But, please, don't have issues. Don't scare the horses. How can they put a liquor ad on a page next to a news item about a gay bashing? Who can party with that going on?

And yet, there he was: the younger generation, Mr. No More Nice Gay pissed off because he suddenly gets it. He may be young, but he is struggling. And worse than that, his struggle is old: He's still not equal. 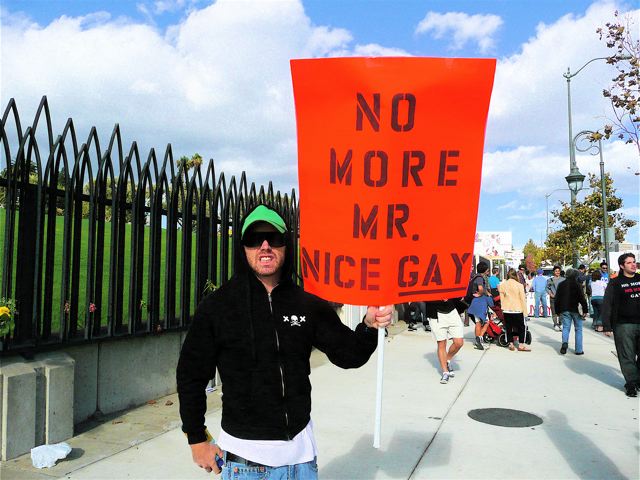 Most agree that the initial reaction to the passage of Prop. 8 in California was very hopeful. If only we'd made ourselves visible like that before November 4th! For weeks the feeling was, this is the biggest community response since ACT UP. But when the announcement came ten days later that the California Supreme Court would review the validity of Prop. 8 (beginning March 5th), things quieted back down and all protests stopped. Even President Obama's so-called "misstep" with Rev. Rick Warren didn't cancel any trips to DC for the inauguration. You see, protesting is still bad sportsmanship. It's rude. It's withholding. It's bad behavior during festivities. And who wants to be seen raining on a parade?

Well, you might not want to be seen raining on it, but it is your parade too. And even though I could be having fun, (and I'd love to -- with a gadget and a drink and a car), or I could be spending my time ringing my hands over more important things like the world's financial crisis, I'm still hopelessly stuck on the fact that a few percentage points worth of California voters--and way more in Florida and Arkansas -- took time out of their busy day to make sure I don't have all my civil rights. And if it's that important to them, I feel it should be equally important to me.

So I sure hope they all were watching the Academy Awards February 23 when Milk screenwriter Lance Black won not only Best Screenplay but more importantly, the chance to deliver the most graceful and heartfelt message possible to 36.3 million viewers around the world. The openly gay Black thanked Harvey Milk for saving his life by giving him hope that someday he might grow up, fall in love, and get married. Honestly, we could never have come up with enough money to have purchased ad time during such a humongous event, let alone paid a more spectacular and talented new superstar to deliver it with such authenticity.

And, trust me, Lance appeared at a bullseye moment:

The California Supreme Court just heard a lawyer name Kenneth Starr tell them to annul 18,000 gay & lesbian marriages. Yes, that Kenneth Starr, the one who's already demonstrated that he can whip up quite the obsession for other people's sex lives (Monica Lewinsky, anyone?). And please, what's wrong with us? Why didn't we predict Starr's inevitable comeback as lead counsel on behalf of Prop. 8's official proponents--really was he not destined to cast himself as some sort of Straight-Marriage Nazi?

I wonder, is there a polite way to get all our rights? To be well behaved, must we wait for everything else to be taken care of first, like the economic crisis, the war(s), and for all homophobic people to be educated? I think you know the answer to this. Whatever the California Supreme court ultimately decides this time, all hell is gonna break loose. Although predictions have been made about the outcome of the court's brainstorming (Prop. 8 = upheld, 18,000 marriage = upheld), at this point in time, we don't know.

It they overturn Prop. 8, supporters will claim they weren't heard, forgetting that a majority cannot dictate the civil rights of a minority. (Although it was Senior Assistant Atty. Gen. Christopher Krueger, arguing that Prop. 8 be overturned because it repealed an inalienable right, who fared the worst at the hearing, many say, due to his performance.) Regardless, it's clear that African Americans would still be sitting in the back of buses and drinking from separate drinking fountains were it not for the justice system. Sadly, history demonstrates that the courts lead the way while the hearts of some Americans must drag behind.

But if the Supreme Court lets Prop. 8 stand, we need to stomp up to the proverbial plate. Personally I think rallies and marches have a purpose because they show our numbers to the media. But they're not enough. And, yes, it's true, times have changed. Lying down in the streets and being hauled off in paddy wagons is yesterday. It's a new world. Today it's all about finances. I say use what is on everyone's minds. Besides, it's perfect for what is being taken from us.

The battle cry is very old (1763): "No taxation without representation." It's also very American. The phrase was first used to voice the grievances of the British colonies (that would be us). Just like back then, it means we are not being represented fairly, that we too do not have all the rights other citizens have, so therefore taxing us equally is unconstitutional. If we don't have the "right to get married," or the "the right to be in the military," or "the right to keep our jobs" or "the right to keep our children," etc., then we shouldn't give them all our taxes. Any questions?

Now when Joan Baez withheld her taxes to protest the Vietnam War in the 60s, she made headlines and she made her point. But ultimately she had to pay her taxes because she had no legal grounds for withholding the money. Unlike us, she had all her rights. She just didn't like how the government was spending her money: on the war.

Initially, when Prop. 8 passed, Melissa Etheridge announced she would do exactly what I'm proposing. Then she changed her mind. It won't work if only a few people do it. It should be obvious that the government will just make them pay. But a huge, well-organized group of people doing it? That's different. That's a movement saying something loud and clear.

Oh, but one thing: it's still rude. And a lot of folks think in light of this wonderful new president, we shouldn't be rude. He's got enough to think about. I'm not one of them, as you've figured out by now. I think we can do two things at once. We can support the president and our country. But we can also support ourselves.

Sometimes we just have to be Ms. or Mr. No Longer Nice Gay. But who knows, maybe if we're seen and heard today, the Supreme Court will consider how much we care about what they're going to do. They did the right thing once. Maybe what we do in the next days can keep us from a ruder destiny. So think about it. If you got married, send them a jpeg of your marriage license or your wedding pictures. Make yourselves real.

But do something! Kenneth Starr is very, very real and quite busy.

Wieder is currently preparing a book for future publication with a remarkable celebrity and working on a new website.

Judy Wieder, former EIC of The Advocate; Former ED Out, OutTraveler, Advocate.com; Memoir due to publisher 12/14