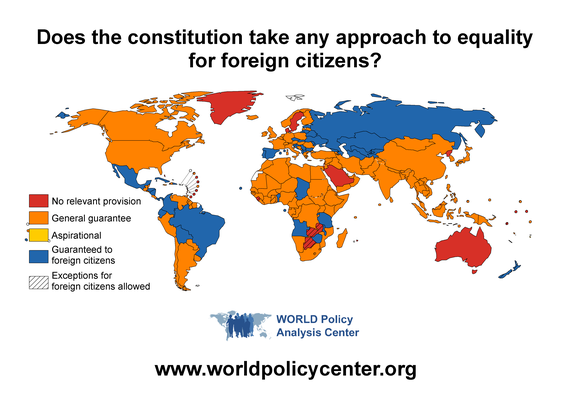 At the end of September, Germany made headlines for translating the first twenty articles of its constitution into Arabic. To encourage refugees to "not only learn the German language but also the rules of the game of living together," 10,000 copies of the document are being distributed at registration centers. As made plain by Vice Chancellor Sigmar Gabriel's explanation, this effort aimed to ensure new arrivals know their constitutional duties - but what about their constitutional rights?

While the Syrian refugee crisis is currently capturing the world's attention, it reflects a much broader trend of increasing migration worldwide. Whether driven by war, natural disasters, or the prospect of better economic opportunities elsewhere, over 232 million people had chosen to migrate from their home countries as of 2013, compared to 175 million in 2000 and 154 million in 1990. And depending on their destination, their civil rights and access to healthcare and education can vary dramatically under the law.

Yet countries have made commitments under international treaties to uphold migrants' rights. Under the International Covenant on Civil and Political Rights, 168 countries worldwide, including every country in Europe, have pledged to ensure equality before the law for all within their borders - regardless of nationality or statelessness. Likewise, under the International Covenant on Economic, Social and Cultural Rights, ratified by 164 nations, countries must guarantee that all people, including refugees, asylum-seekers, stateless persons, and migrant workers, have access to schools and affordable health care (with caveats only for developing countries on affordability). While citizenship-based restrictions on certain political rights, like voting or running for office, are permissible, the commitment to fulfill essential needs and uphold access to basic opportunities is firmly established in international law. As illustrated by Germany's translation efforts, national constitutions help shape societies by establishing fundamental rights and shared values. In an era of mass migration, they are also becoming a key place for enshrining countries' promises to protect the rights of non-citizens within their borders.

History shows that constitutional rights make a difference for migrants. For example, in Switzerland, a court in 1995 found that three refugee brothers were entitled to a basic level of support despite being non-citizens, given the constitution's commitments to equality and the principle of human dignity. In South Africa, a 2004 court case holding that the word "everyone" in the country's constitution included non-citizens meant that hundreds of thousands of Mozambican refugees who had been living, working, and paying taxes in the country for decades became eligible for social security. The more clearly these rights are articulated in national constitutions, the better they will ensure that all migrants and refugees have a fair shot at a fresh start upon new shores.

So when refugees at Germany's registration centers get their copies of the constitution, will they see their rights addressed? Although Article 3 explicitly prohibits discrimination based on "homeland and origin," like most of the world's countries, Germany has yet to embed an explicit protection for migrants' rights in its fundamental text.

In this crisis, attention is appropriately focused on the urgent situation of millions of refugees fleeing Syria and the Middle East. Yet we must be better prepared to uphold migrants' rights both today and in the years to come. If the world is going to live up to its commitment to protect the basic rights of all children and adults, we need to ensure that all the countries that have pledged under international agreements to protect migrants' rights pass and implement these rights at a national level. In the coming decades, we can expect hundreds of millions more to migrate and scores of constitutions to be amended worldwide. As these amendment processes take shape, policymakers should honor their treaty promises and ensure that the law of the land truly protects the rights of all.