Sometimes you just want to stand in line at the grocery store and not have to explain your vaginal history to a total stranger. I'd hazard to say that at least seven times a week for my 35 week pregnancy (that's 245 times), distant acquaintances, well-intentioned friends, and strangers on streets, in cafes, at knitting stores were brazen enough to ask, "Do twins run in the family?" 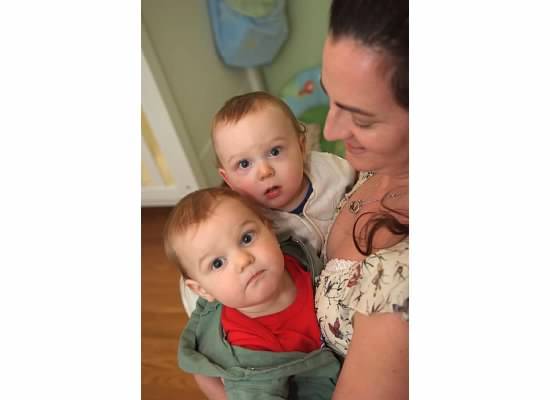 This would come after an aghast look at my belly, which was big enough to look as if I'd swallowed a submarine and a whale. The question continued has haunted me through double-decker stroller walks, preschool double play mayhem, and even today at skate parks and baseball games, with my now attitude-toting, 7-year-old twin boys.

While I imagine this question is intended as a pleasant conversation starter, what people don't realize is that the answer for many of us is complicated, fraught with pain or shame, and not as innocuous as commenting on say, the state of the weather, or the state of the Union.

Can you imagine asking someone with singletons, "Did you have sex 700 times or did you do it doggie style and hit the jackpot on the first try?" Then, just like a frat boy at a football game you'd high-five her and say, "Babe! Way to go!"

If you were more educated you might ask, "Did you adopt from an orphanage in Russia or implant eggs from a curly-haired surrogate with a Ph.D from Yale and a basketball scholarship?"

I can only imagine what gay parents of adopted African-American babies must endure ("Are they yours?"). Or suburban blonde parents who have adopted Asian children ("Did they come with a chess set or violins?"). Some lesbian mothers of twins have told me the most predominant question they get is, "Who carried the babies?" subtext implied, "So she's the real mom and you're the dad?"

Full disclosure: this is commentary from the liberal nest of San Francisco. Can you imagine what they say in Texas?

It's not that I don't empathize with the natural curiosity of strangers. Twins are adorable (from a distance), triplets are adorable (and triply grey-hair inducing), while quadruplets and more are the stuff of reality TV -- people like to watch from a safe distance.

I understand that these interviewers are simply curious dolts, who either don't have children themselves, or they are so wildly fertile that it would never occur to them that anyone else might not be. Perhaps they are wannabe parents doing research -- innocents who believe that their lives will be complete only if they too procreate and bring more howling, whining, giggling, sniffling, delightful and maddening little creatures into the world.

Still, I'm contemplating have a T-shirt made that reads: "What happened? I got fucked!"

Or I could just tell the truth. This would end the conversation for once and for all.

"I tried for over two years until the tennis-playing-fertility specialist told me that I had Endometriosis -- a kind of internal menstrual bleeding that leads to abnormal growth of cells outside the uterus, which blocks the sperm from weaving its way through the Fallopian tube, and into the egg.

"I've spent seven days a month since I was 14 I'm now one hundred and two wracked by death-defying cramps -- a condition that would make men weep, and which went undiagnosed by my perfectly coiffed Manhattan OB who spent more time talking to me about my socialite mother's latest achievements as I listened, feet stirruped in fuzzy bear-patterned potholders.

"One time, Dr. Bloomenthal even said that we looked so much alike -- although I believe he was talking about our faces."

My West-Coast fertility specialist told me (in a calm but factual voice) that my eggs were old, my chances of conceiving were near zero, but for a mere 12 grand he could increase my chances to 40 percent! If that failed, for another 12 grand I could try again, and again. Please sign on the dotted line that you understand there are no guarantees and the payments will not be refunded.

Of course, if I had tried to get pregnant when I was 25 and a total emotional basket-case, I'd have had at least a 50 percent chance, so basically, it was my fault for waiting so damned long, while trying to find myself and trying to find the right-enough man. Or at least a man who wouldn't leave after zipping up.

Despite the shitty odds and my genetically fucked gene pool, I threw down my life savings and allowed my ambivalent-about-parenthood stilt-walker husband to jab me in the ass 87 times with a needle full of hormones. This left me with welts, bruises, and varicose veins across my ass and thighs. It was like getting shot up in a drive by, every day, on purpose.

What was it you asked? "Do twins run in the family?"

No, actually they don't --but Manic Depression does -- and on both sides of the family. Have a nice day!