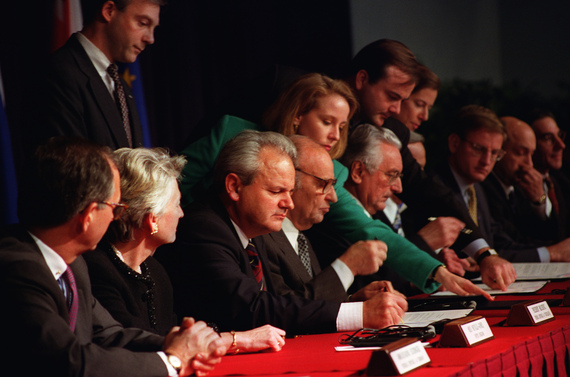 Initially, most Bosnian-Americans were welcomed as refugees, including I who came in 1967 as a refugee from then a more authoritarian Yugoslavia. More recently, there has been more of a tidal wave of those from Bosnia & Herzegovina who came after being torn away from their homes through a horrific campaign of ethnic cleansing that in more subtle ways still persists. After years of being more the new immigrants, the Bosnian American is now not only a U.S. citizen/resident but he or she is more integrated in the social, economic and political life of America. Many of them have been born or educated in the U.S. They have developed strong links to their American communities, institutions and friends.

Now, when many of them view the Dayton Accords which two decades earlier brought U.S. and BiH political leaders together, they see such as much or more as Americans with U.S. political values and strategic interests, from the threat of terror groups as ISIS to the challenge of authoritarian leaders as Vladimir Putin. With this evolution in mind, Bosnian-Americans ask if BiH is a crucial partner to America as the U.S. and EU are still defining the future of BiH -- after a Dayton Accords based on false narratives and long beyond its initial expiration date.

As Americans, and many of us who have come/have origins from Bosnia & Herzegovina, we have an interest in promoting not only good relations but the yet untapped strategic interests aligned between the U.S. and "BiH" in a rapidly evolving set of challenges from Europe to the Middle East and beyond. While BiH still needs America, beyond the Dayton Accords. to attain the political goals and values of a Euro-Atlantic partner, the question is rightfully asked whether the U.S. needs BiH as much or more in addressing the new risks of terror and authoritarianism in diverse conflicts as Ukraine and Syria. Further, is the normalization of BiH and integration into Euro-Atlantic institutions the key to stability in SE Europe still stoked by nationalist agendas, from chauvinism/terror employing religion as pretext, (Muslim, Christian, etc.) to Vladimir Putin's efforts to expand his sphere of influence to the Adriatic?

The discussion in the past has too frequently been shaped by issues that define the past but do not address the future:

-- The Dayton Accords did bring an end to war in BiH. However, the Accords also left BiH hamstrung in achieving the political and economic markers necessary to achieve Euro-Atlantic integration. The "injustices" or shortcomings of the Dayton Accords should not be judged as perhaps compromises needed to end a war in 1995 but, in 2015, as inadequate and failing the needs of BiH now and in its needed path forward toward the Euro-Atlantic family. This also acts as straight jacket for a clear vision and action of U.S. and BiH strategic relationship and partnership.

-- Regardless of our view and/or support for today's BiH political parties and leaders, such are now vested in the system, flaws and nationalist politics in effect enabled by the Dayton Accords, (or at least the interpretations and application of such in today's BiH.) Our favorable/unfavorable views of the politicians and parties do not alter the fundamental that the current system and much of the Constitution as enshrined by the Dayton Accords is regressive. The proof is in how BiH has not only fallen behind most of its neighbors, including Serbia and Montenegro, as well as Croatia, Slovenia and Macedonia toward EU integration and NATO partnership, under the presumed tenure of the Dayton Accords.

-- The Dayton Accords, besides enshrining BiH's current Constitution, are also an international agreement, endorsed primarily by the U.S. and EU, (along with UN Resolution.) The U.S., as Dayton host and sponsor, as well as Europe have not only an ongoing obligation to the evolution from Dayton Accords but toward BiH integration into relevant institutions as a key mutual strategic interest of the Euro-Atlantic family as a whole. The Dayton Accords was intended to be transitory, as many of its provisions are inconsistent with EU and Euro-Atlantic institutions. Within the Accords signed in 1995, not only the Office of the High Representative but also European Council, European Court of Human Rights, ICTY and etc. were intended to guide and shepherd this transition.

-- Those who allow any single party within or outside BiH to effectively block the country's transition, integration and partnership within the Euro-Atlantic family and its institutions cannot employ Dayton for such subterfuge, as the Accords envisioned the transformation(s) and change necessary, (as has been the case with every European state since WW II.) Giving credence to those who see partnership within the EU and/or NATO as somehow in conflict with their "historic" links to near and far neighbors or religious identity, gives legitimacy to new notions of expanded "spheres of influence" whether emanating from the current Moscow or regressive views of Islam. It should be reminded that many Orthodox Christian and Muslim majority countries are EU and/or NATO partners, (Greece, Turkey, Romania, Bulgaria, etc).

-- The continued advancement of BiH toward a social as well as political model as the U.S. should be encouraged based upon our experience as Americans. We understand and have experienced that discrimination and ghettoizing persons on base of race, ethnicity or religion is not only contrary to the many advancements of America's economic and cultural achievements but can lead to a relapse into conflicts of the past, (whether in Ferguson, Missouri, and Charleston, S.C., to Banja Luka and Trebinje in BiH.) Being "American" makes one no less Jewish or Muslim or African-American or Hispanic or Asian-American. Similarly, recognizing a Bosnia & Herzegovina belonging and loyalty does not diminish our Bosnian Serb (Orthodox), Bosnian Croat (Catholic), "Other" or Bosniak identity. BiH, as America, is a state of multiple identities. Diversity is a treasured resource for the country as a whole and not mis-employed as a narrative for conflict.

Rather than be source of creating false barriers between the U.S. and BiH, we must move beyond the Dayton Accords, regardless of how we judge it historically, to the next level of advancement of shared strategic interests and political values. We encourage all with origins in BiH and the friends of BiH, America and the Euro-Atlantic values to support BiH beyond the Dayton Accords and to true partnership within the relevant institutions.

Ambassador Muhamed Sacirbey will be speaking at Miami University in Oxford, Ohio on Wednesday, November 18, at the Dayton Peace Accords Conference.

This post is part of a series produced by The Huffington Post to commemorate the 20th anniversary of the Dayton Peace Accords. The agreement that ended the war in Bosnia and Herzegovina -- after over 100,000 people were killed and over two million people were displaced -- was reached on November 21, 1995.