Central and Western Africa are experiencing a massive wildfire outbreak due in part to drought and our ever challenging climate anomalies. This is not only escalating an intense CO2 plum over Africa, it is also adding to the ongoing predicament of our near term demise as a species. Scientists say "..there's a significant risk that we've already hit "the limit" and that a carbon feedback is underway." No coverage from major news organizations.

These wildfires are plainly visible in the NASA/MODIS satellite shot -- covering about a 1,400 mile swath stretching from the Ivory Coast, through Ghana, Nigeria and Cameroon and on across the Central African Republic, the Congo, and Gabon.

Smoke from these fires is extremely widespread -- stretching over almost all of Western and Central Africa, blanketing parts of Southern Africa and ghosting on out over the Southern Atlantic Ocean. Together with these massive fires we have what appears to be a rather significant CO2 plume showing up in the Copernicus monitoring system (see below). It's a signature reminiscent of the amazing Indonesian wildfires that, during a few weeks of the Fall of 2015, matched the CO2 emission of Germany. The satellite representation of these fires is so strong that it's difficult to believe that no news of the fires has hit the mainstream media. But, so far, there hasn't even been a peep.

The intensely burning fires now rage across a region of Africa experiencing both severe heat and drought with temperatures hitting well over 40 C in Nigeria and over 36 C throughout the broader region today. An extreme heatwave occurring in tandem with a new kind of flash drought event that's becoming more and more common as human fossil fuel emissions keep forcing the world into higher and higher temperatures ranges.

President Mugabe, in Zimbabwe, has declared a state of emergency. "More than a quarter of the 13 million population struggled to access food. Many families were reported to have gone more than a week without a meal.." No habitat, no food, no drinkable water, no humans. Interestingly, no media coverage.

An estimated 10 million people in Sudan are at risk of going hungry. 40,000 were identified as potential immediate casualties. Ethiopia is experiencing massive livestock die-off .

(A food emergency -- shown in red -- emerges in East Africa even as food crises erupt across Central and Southern Africa. Food emergency regions indicated in red on this map are just one level below famine. Image source: Famine Early Warning System.) 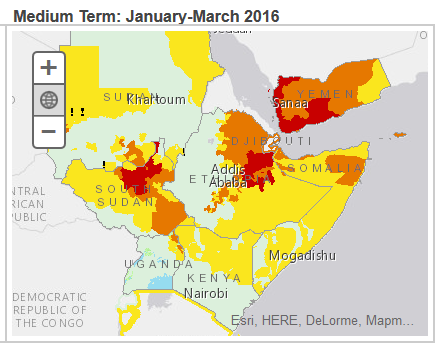 We send cheques to save black people in Africa, never asking the question how the richest continent in the world can possibly have even a single impoverished person.

A friend writes: "More people will have cell phones than running water by 2020."