We seem to have become a bit unclear about how we want politics to shape the pressing social concerns of our time. We are convinced that our way of life, going back to Rome and Greece before Christ, to the very cradles of Western civilisation, is what has brought humanity to the astonishing heights it can dare to gaze down from today. Our values of freedom and egalitarianism have ensured that as a species, humans could make regular, meaningful progress over the centuries; after all, there's a reason why they're called progressive values.

In the bleak, wretched societies of the Islamic State, we recognise the aimlessly wandering European of the Dark Ages, fraught with hopeless superstition, driven by fear and ignorance, and consumed by power and authority. We see the women buried up to their necks in sand and pelted with rocks for "offences" such as talking to men who weren't blood relatives, and recall how, a little over 200 years ago, women in Western Europe, that bastion of enlightenment today, were burned at the stake for crimes such as witchcraft and sorcery. We moved away from those cheerless times, realising we must never, ever look back. And we didn't, right up till now.

The cornerstone of our movement towards civilisation is our recognition of the disgraceful way women have been treated throughout history, and our attempts to remedy that has been arguably the biggest success story in the history of civilisation. However, now that women can work, vote, choose their partners and have a say in their reproductive cycles, complacency seems to have set in. There's a belief that we've reached our destination, simply because we're on the right track.

And yet, those on the political spectrum most vociferously and vocally opposed to the barbarities of societies who treat women like livestock, and most convinced of Western superiority, also appear to be the ones least willing to remove all roadblocks to let women achieve true equality. They effectively deprive their societies the plentiful benefits full female participation can help bring.

It is at work that the gender divide is most keenly felt. According to the World Development Report, female employees, even in high-income OECD countries, are more likely to work in temporary and part-time jobs, less likely to be promoted, and concentrated in occupations and sectors with low barriers to entry. They are not as well remunerated for the same amount of work, and because of gender-specific societal constraints, far less likely to be seen in leadership positions than would be representative. (Only 22 of Fortune 500 CEOs are female, which comes up to about 4.4%.) In addition, women and girls do the overwhelming majority of housework such as cooking and cleaning, all of which is usually unpaid, and not recorded in any GDP statistics.

It isn't simply enough to congratulate ourselves on our progress while at the same time stymying efforts to take it to its logical conclusion. It isn't gallant to pull out a chair or hold open a door for a woman, if at the workplace, the woman would never be allowed to occupy that chair - particularly if it were a prestigious one - and would instead have the door slammed in her face because it 'wasn't the sort of work' a woman was fit to do. 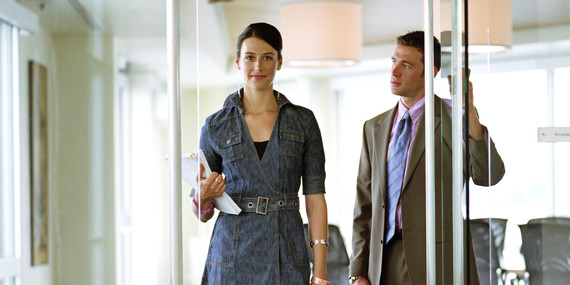 Leaving women in the cold deprives them of their right to be given the same opportunities as their male counterparts in many walks of life, most noticeably on the career ladder. This doesn't, of course, mean we should ensure half of the engineers in the world are women, or half the doctors, or indeed half the CEO's, because that would artificially peg a number to a profession in a superficial nod to equality. Equality has to happen right across the board, in all walks of life, from bottom to top. This is why Hilary Clinton becoming president doesn't mean the goal of perfect equality has been achieved any more than Obama's presidency heralded the end of racial discrimination in America. After all, Pakistan elected its first female Prime Minister 28 years ago (the first Muslim country to do so) and yet few point to that country as an example of progress on women's rights.

Part of it has to come from women themselves. The feminist movement would never have been achieved solely by theoretical, academic discussions at universities, important as they surely are. It came about due to the thousands of courageous women who were beaten, humiliated, thrown in jail, killed, and yet refused to settle for the raw deal they had been offered for time immemorial. Women must place a higher value on what they have to offer, not accept seven tenths, or whatever the fraction is, for the same work, or self-censor because it's easier than standing up for their rights and dignity. If that sounds scary, they are fortunate to be able to choose from a litany of powerful stories about their fellows across history, and more pertinently, across the globe today, for whom no amount of oppression and abuse is as frightening as the idea of a world where their counterparts are deemed inferior. In the West, we are fortunate that the struggle for equality doesn't often bring with it the possibility of such stark consequences, and thus there really is no excuse to stop now the goal is so tantalisingly close. Why should the ones demanding equality, with logic and morality on their side, be the ones called strident, instead of those who wish to deny them that right?

The human race would be a shadow of what it is today without the contributions of women. If we are to continue moving forward, we must ensure that equality for half the human race is not an issue that is in any way negotiable. The absence of women from high-profile jobs in any workplace is most certainly their loss, but if we come to consider it acceptable and normal, it becomes ours too. The injustice is so brazen we can see it from our windows. We must walk over to our doors and hold them ajar.

Journalist Danyal Rasool contributed to the writing, editing, and publishing of this piece.