In 2011, Gary Hamel wrote a seminal article called First Let's Fire All the Managers where he explores the challenges with modern management and hierarchy. These include large overhead costs, poor decision making, sluggishness due to bureaucracy, and employee disengagement and lack of empowerment. Managers have long been considered to be the bedrock of organizations, so even thinking about getting rid of them is considered by many to be taboo. But, it's time for us to challenge convention and think differently about the world of work.

According to the article:

"A small organization may have one manager and 10 employees; one with 100,000 employees and the same 1:10 span of control will have 11,111 managers. That's because an additional 1,111 managers will be needed to manage the managers."

So what's the alternative? If managers are doing more harm than good, then can we really just get rid of them and still operate a successful organization? Yes! In my recent book, The Future of Work, I chronicle several "managerless" companies including Morningstar Farms, Sun Hydraulics, Valve, Medium, W.L. Gore ,Inc, and several others. Some of these companies like Valve, the gaming company that has produced such hits as Half-Life and Counter-Strike, are very tech savvy; whereas others are far more traditional such as Sun Hydraulics, which creates valves and manifolds, or Morningstar Farms that produces canned diced tomatoes and tomato paste. Clearly, this isn't just something that cool, hip, modern companies are doing.

When I first heard about these companies without managers, I became quite curious. After all, how can anything possibly get done in this type of environment? In the visual below you can see a breakdown of how traditional organizations compare with "managerless" organizations in various areas ranging from hiring and firing to leadership to what happens at the company if something goes wrong. 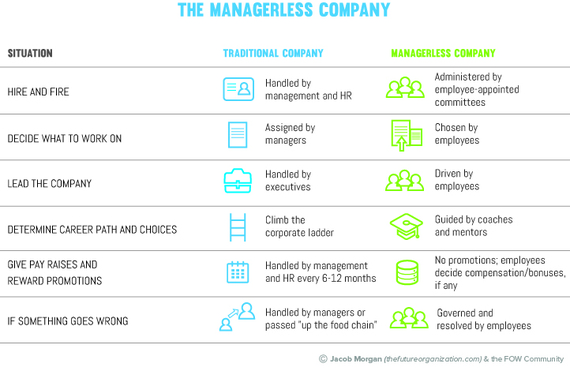 Of course, this type of a structure doesn't make sense for every company in the world, but the point is that this type of a scenario is possible and the organizations that have adopted this approach are doing very well. Most companies that I speak with and research are all trying to figure out ways to "flatten" their structures, and getting rid of managers may be a bit extreme for some. However, other organizations such as Tangerine (formerly ING Direct Canada) do have managers, yet they don't focus on these titles or roles internally. For example, in a meeting nobody would bring up seniority as a way to shut someone down. Other companies like Whirlpool have also shifted away from traditional managerial roles by creating four different types of "leadership" where everyone at the company is considered a leader of some kind (for example, if you are an entry level or junior employee you may be called "a leader of self.")

Whether your organization decides to get rid of managers or not, one thing is clear, the traditional models and approaches to how work gets done are dramatically changing. The future of work will see some very interesting experiments emerge -- some will be successful and others won't. I'll be writing more about these companies individually in the future, but for now I wanted to introduce the idea to get you thinking about it.

What would happen at your organization, if there were no managers? Would everything fall apart and go into chaos or would you see a more engaged workforce and a more successful organization?

Jacob Morgan is a futurist, best-selling author and keynote speaker, learn more by visiting The Future Organization.com or check out his latest book,"The Future of Work: Attract New Talent, Build Better Leaders and Create a Competitive Organization," on Amazon.