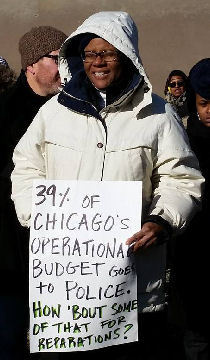 How All the Major Mayoral Candidates Are Getting it Wrong

For decades every Chicago mayoral election has featured calls more for hiring more cops. Emanuel and Daley of course got in on the act, but the most popular non-Machine contenders are calling for the same thing.

When she was a prospective candidate, Karen Lewis repeated the now-familiar mantra, as did Bob Fioretti, and after vacillating with vague mumbling about "community policing," so now, too, has Jesus "Chuy" Garcia.

But does Chicago have a dearth of cops compared to other cities? And more to the point, would more cops do anything to stem our civilian-on-civilian violence rate, let alone address the anger over police violence expressed in the continuing protests over the killings of Michael Brown, Eric Garner, and several local victims?

Listening to the candidates, you would think that Chicago has a dearth of cops compared to places like New York, which had 79 fewer murders in 2013 despite having more than three times our population, or Los Angeles, which had 163 fewer murders despite having a million more people. But in fact, according to the FBI, Chicago has the third highest cop per civilian ratio in the country. And when extraneous factors are factored in, like the presence of the federal government officers, Chicago arguably has the highest number of municipal cops per civilian of any city in the country.

According to the FBI's 2012 Uniform Crime Reporting Program, which counted officer / civilian ratios in every municipality of over 50,000 people, Chicago ranked #3 in the nation behind only Washington, DC (8th highest murder rate in 2012) and Baltimore (fifth highest murder rate).

While Chicago is hardly the "murder capital" of the country, our violence rate does compare quite unfavorably to other large, relatively prosperous U.S. cities like New York and LA, and the U.S. violence rate is rightly notorious compared to other developed nations.

So if hiring more cops bears little causal connection to, or even correlation with, stopping civilian-on-civilian violence, let alone ending police violence, how can we most effectively reduce Chicago's violence?

To figure this out, we need to move beyond the scare headlines and politicians' bumper sticker promises. We also need to reject some canards commonly put out by community anti-violence activists.

Besides the "hire more cops" solution offered by politicians and many community anti-violence activists, the other major prescription for ending the violence is gun control. This too has been a failure, and not just because guns can be imported across city boundaries and the courts have taken a broad interpretation of the 2nd Amendment.

Internationally there is very little correlation between levels of gun possession and violence rates. Honduras, with by far the highest murder rate in the world -- 80.6% higher than the second place nation -- is way down the list in per capita gun ownership at 88th in the world, tied with England/Wales and Bulgaria.

On the other hand, high gun possession countries can have very low murder rates. In Switzerland, for example, owing to its 19th Century formation as a nation protected by armed militias, virtually all men between the ages of 18 and 42 have firearms in their homes. Yet Swiss murder rates are extremely low by world standards, similar to the quite low rates of other Western European nations where civilians have almost no access to guns.

If Not More Cops & Gun Control, What Does Limit Violence?

Regardless of policing strategy or number of cops, the fact is that the violent crime rate in most U.S. cities has been declining for several years.

This probably has more to do with demographics than anything else - as our overall population ages, younger men are aging out of their more violence-prone years. Some studies also convincingly point to the deleterious effects of lead poisoning on young adult cognition, and its significant reduction over the past few decades, as a major factor in the diminishment of crime.

Then there is the impact of the stunning, decades-long law enforcement failure to stamp out illegal drugs. Illegality serves to hike prices, and thus profit margins, prompting sellers to take ever more desperate, illegal and violent measures to collect those profits. Converse to this, we now have preliminary data suggesting lower violence in Denver due to the end of marijuana prohibition, as well as convincing historical data about the diminishment of violence caused by the ending alcohol prohibition during the Great Depression.

But if these factors contribute to a decline in violence, what are the factors that promote it?

Read about it in our next installment tomorrow.