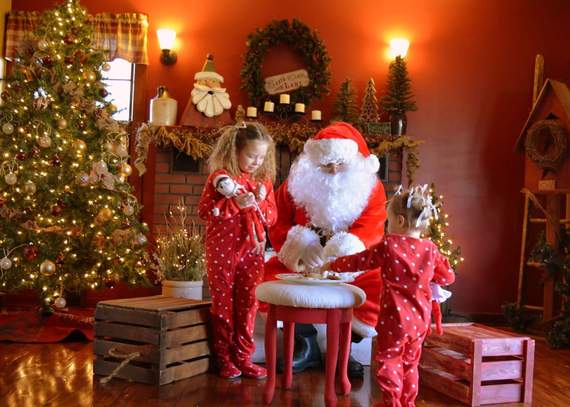 Santa, the legendary patron saint of children, commonly identified as Saint Nicholas, who brings presents to children on Christmas Eve.

So the real question is, do you believe in Santa?

Could it be coincidence? Could some circumstances be defined as a remarkable concurrence of events or conditions without any apparent connection?

I've seen grown men brought to their knees with a complete change of heart, moved by the magic of a holiday that at one point along the way, they forgot to believe in.

I've seen doctors baffled at cures that have no substantial, scientific explanation.

I've seen a widowed woman receive a Christmas gift every single year, from her deceased husband 12 years past.

I've seen babies who were not supposed to live who were brought back to life from the warmth and touch of being laid upon their mother's chest.

I've seen those endure relentless heartache only to find relief through this holiday of miracles, simply because they held on for just a little longer.

I've seen a couple who struggled through times, should having ended in divorce. But the magic and birth of a King held them together for one more holiday, which turned into one more year, turning into 45 more years.

I've seen a Christmas Truce fall upon men at war.

I've seen a woman lay unresponsive, not breathing after complications during childbirth. As doctors rushed to deliver her baby, they found he was a stillborn. Against all odds, the stillborn baby was able to be revived while the mother still lay unresponsive. But then, four minutes later, on Christmas Eve, after no brain activity, no heart beat, and no blood pressure, the mother joined forces and was brought back to life with her baby.

I've seen a child first speak on Christmas morning that was never supposed to talk.

I've seen a mother completely change her mind before taking her unborn baby's life, as she, herself, received a Christmas miracle, showing her that she could do this and there would be a way.

I've seen a family days away from being evicted out of their home, saved by an anonymous person on Christmas Eve. 7 years later, that home is still in their name.

I've seen people have life change their plans so drastically, sure that it's everything they don't want or can't handle. Only later to find it was the best gift and everything that they simply had needed.

I've watched families crumble only to be healed and built back up, now a better and stronger version than they once were.

I've seen children who weren't supposed to have anything under their tree, a tree that they never even had, well...appear Christmas morning, with presents underneath it.

So, yes. Yes, I believe in Santa. I believe in the magic of Christmas. I believe that this world was blessed with a King that would define this particular day in time, more worthy, more magical than any other day of the year.

I believe that Santa, that Christmas, has the power to call miracles from Heaven to Earth.

Believe. Believe while others are doubting and watch the magic of this season find you.

More:
miraclesBabiesparents-dadsSanta ClausChildren
Newsletter Sign Up
Raise the kind of person you'd like to know
Subscribe to our parenting newsletter.
Successfully Subscribed!
Realness delivered to your inbox