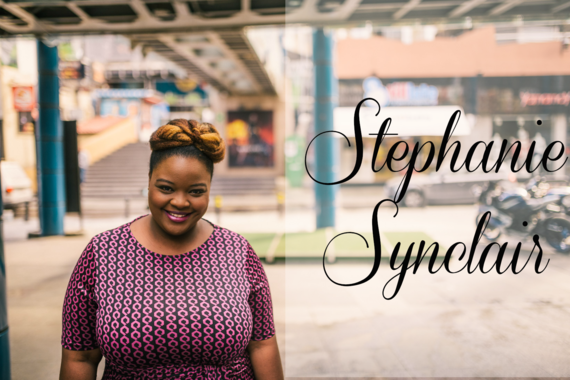 When I first heard of Stephanie Synclair, I was incredibly inspired by her story--she went from $21 in the bank, living with her mother and her two-year-old son, to building a 7 figure coaching business within 5 years.

But what inspired me even more was the fact that she showed me that you didn't have to be white, skinny, or perfect or fit a certain mold to be successful in the coaching industry.

What has made you so successful in such a short period of time?

One of the keys in my success was first me believing that it was all possible.

Often women say they desire a thing yet on a deeper level, they don't really believe it's a possibility.

I knew on a deeper level that it was meant for me to run a successful business and I knew that I no longer wanted struggle to be apart of my story, so I decided to change it and to do so by Quantum Leaping.

What made you decide to go into coaching? Were you always entrepreneurial or was it a decision made later in life?

Unlike the story of many, I actually had no desire to be an entrepreneur growing up.

My desire was to have a nationally syndicated television and radio show and for me to make a huge impact on the world.

After quitting my job in the fall of 2009, losing absolutely everything because I left my job with no plan and having to move back home with my mother, I decided that I had to do something to get money rolling in.

I created a business selling handmade hair and skin products that quickly rose to success using only social media marketing.


I built a solid following of women who purchased my products but also wanted to start businesses themselves, so I started holding free calls on Saturday sharing with these women how to attract clients using a blog. That was the start of my coaching business!

What do you believe separates the successful entrepreneurs from the unsuccessful?

This is a good one because I believe we all have the ability to be successful entrepreneurs, but there is one thing that stops those that aren't successful....Bear of taking chances.

Their fearful of being visible, fearful of having sales calls, scared of what friends and family will say, afraid of judgment, scared to invest and they let this fear cripple them.

All the fear causes them to "play safe" and playing safe is dangerous in business.

Success is risky business and you have to be willing to take that risk.

Its not that successful people don't feel the fear around that risk but instead they move forward anyway, allow the risk to drive them...providing almost an adrenaline rush!

Why do certain entrepreneurs work hard but still don't achieve the results that they want?

There are so many people "working hard" and taking massive action.

And the most successful clients that I've had actually aren't working what others would call hard.

It all is in the mindset and the idea of working hard to succeed is the first issue.

That's an old money belief that must be eradicated in order to really succeed in business.

You must work smart, have the proper systems and structures in place but hard work?

Nope! Its not necessary.

The person working hard and taking massive action usually has money beliefs blocking them from attracting the clients they desire and creating a successful business.

Mindset is a funny thing. No matter how much action you're taking, if you're still hanging on to old beliefs that do not serve you, it will stop you dead in your tracks.

There is a blueprint. You just need to get your hands on it and work it!

Do you believe that women who do not fit a certain image of the coaching industry has any barriers to success?

I talk about this often. I don't look like the "typical" successful woman looks. I am an African American woman, with big kinky curly hair AND I'm a single mom.

I use to think that being a black woman I'd have to work twice as hard as the next coach, spend more money and jump hoops. And, when I believed that I did.

It wasn't until I eradicated those beliefs and replaced them with the truth that I don't have to jump hoops, I don't have to work harder and that there are clients excited to work with me that my actual results changed.

When I changed the story I told myself, my results showed it.

Do you think single mothers have unique challenges in business?

I definitely think so. As a single mother I struggled for years to find that "balance" between being a business woman and being a mother. My son use to feel like my business took him away from me.

What I later discovered is that there is no such thing as balance. I embraced making my son a part of what I do.

When I'm recording my radio show, On Air with Stephanie Synclair, he is often in my office filing papers for me and when I make videos from time to time he will make an appearance.

I stopped trying to completely separate work and family and I began to understand that they work hand in hand. When I made that shift, women began to see what was possible.

They figured if I could do it so could they and they begin making shifts in their life and business.

Now my son is excited about someday helping to run the business as opposed to thinking that the business takes mommy away from him.

Do you have advice for people who tell you to never forget where you came from?

I sure do. I tell them that they better forget or they will remain where they are. You know, remembering isn't the problem but dwelling on your times of lack is. What we think about is what we attract and I personally was glad to leave my life of lack behind.

So yes, I have forgotten those lackful days that others remember. I choose to remember all the amazingness that surrounded me even when it appeared I was without.

What advice do you have for entrepreneurs just starting out?

My biggest piece of advice is to connect with a coach/mentor from the very beginning that is where you desire to be. Ask yourself if they live the life you desire, if their company is where you want to see your company in 3-5 years.

Connect with them and follow the blueprint. If you sit in a group of super successful entrepreneurs in the same room, you'll learn that there very common steps that each took.

You can always find me through my website www.StephanieSynclair.com but you can also find me through Facebook. Its my second home: http://facebook.com/StephanieTheMarketingMaven

Career Coach for Immigrant Professionals in the US