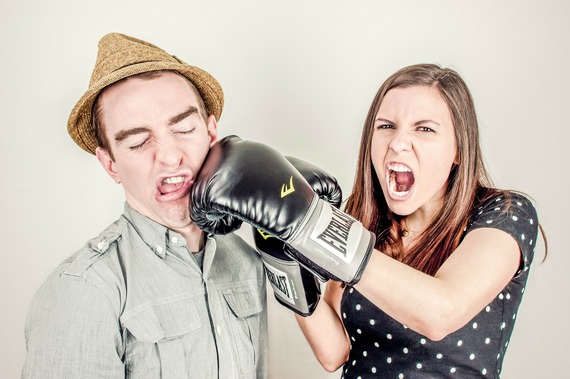 Have you ever noticed that you and your partner keep having essentially the same fight over and over again? No matter what the topic, whenever you get into an argument, does it always seems to follow the same trajectory and turn out the same way? That's usually because you are shadowboxing with the wrong person.

You might have noticed this all boils down to button pushing and how we react to one another when our buttons get pushed. The tricky part of this is most of us are unaware of our internal emotional wiring and how and why we are getting triggered. We prefer to think the problem is always our partner's fault. So, we end up trying to get our partner to change his/her behavior, rather than working within ourselves to understand what is going on inside of us that is making us angry, defensive, feeling misunderstood, etc. I know, in your case it really IS your partner's fault! Right?

Here's the good news - once you change the game from blaming each other because you don't like what is going on to lovingly using the current discord to decode what is really going on - you are on the road to significantly improving the health and well-being of your relationship. Plus, you get to know yourself much better and to heal some of your own leftover hurts from the past that have been getting in your way. Remember, it's much easier to righteously blame your partner for every problem that arises, but eventually all that will do is drive you apart seeking seemingly greener pastures. What I am suggesting here instead is embracing the opportunity to transform your relationship into a safe emotional haven for you both.

The following example might help you to recognize the six people in your marriage or partnership in action. Remember, most arguments seem really stupid when you replay them. Meet Robin (#1) and Jack (#2). They are in love, have been dating about a year and are becoming disillusioned by their habitual fights. To make it easier to follow, I'm just going to present explanations of Robin's behavior and leave Jack's perspective (#4 and #6) to your imagination. Robin is a graphic designer and marketing expert for one of the big music companies and this is her first serious relationship.

A recent argument went as follows. Everything was just fine between them. Then, Jack was telling Robin that he was planning to develop a new website. His plan was to lay out his vision of what he wanted and then to turn it over to his friend Chip to do the graphic design work that would bring his vision to his website. Robin, incensed that Jack did not even consult her for her graphic design expertise in the development of his plan or invite/ask her to do the graphic design work for him, began spinning reasons in her head about all the things that are "wrong" with Jack, fueling her upset. At this point, he could have been reciting the phone book and she wouldn't have noticed because she was too busy convincing herself of how "right" she was and how "wrong" Jack was. Her response to him was to condescendingly correct him saying it would be Chip who created the vision - not Jack. Jack objected to Robin's inference that he was not creative and would have no creative input in the design of his own website. And it escalated from there until Jack, running late for work, headed for the door and Robin was left in disbelief that he could just walk out like that.

Well, here's the decoded version of what was really happening in the above scene. All was fine between them until Robin (#1) got triggered by several things that she misinterpreted about what Jack way saying. She took offense that here she is a graphic designer and loving partner (#5) and it didn't occur to Jack to ask for her input. For Robin, this perspective reinforced her belief/fear that Jack didn't value or respect her professional competence (#3) and that's the person she was fighting with.

When I asked Robin to focus on the feeling she had when Jack first pushed her button and to trace it backward in her life to where else she felt that way, she immediately recognized this feeling being associated with her relationship with her older sister. A specific image came to mind of how, when playing with their Power Rangers, her sister always took the pink one and never even noticed or cared that Robin would have liked the pink one too. This had become a pattern in her life. So, standing there with Jack, her sensitivity to being left out of consideration by another was skewing and fueling the intensity of her reaction to Jack's plans. Angry, she asserted her authority (#3) by correcting Jack's description of turning over his designs to a graphic designer to execute. Jack, with his own sensitivity to believing that Robin didn't think of him as having any creativity (#4), got angry and disgusted with her, feeling that, as usual, she was making an issue where none existed and headed for the door, wanting to get away from her and this craziness. Robin, outraged at his choice to leave at that moment, feared that he was leaving her forever - another childhood fear triggered by the memory of how her father used to storm out in disgust on her mother and the fear she remembered that he would never return and that it was all her mother's fault. With Jack gone, she began turning her anger on herself and blaming herself for pushing him away and fearing he would never return. Got the picture? Each one was having an entirely different experience and conversation - doing battle with figments of their imagination.

This is common behavior between all seemingly "normal" people who have not done the decoding work to identify and work through their past baggage that gets triggered in their present relationships. So, what do you do? If you can afford it, I suggest getting a marriage counselor or life coach with a good sense of humor to work with you to approach the situation in a constructive, exploratory, and non-blaming way. Alternatively, try to do this decoding on your own. The place to begin is always to turn your attention inward instead of outward to help you shift from the blame game to truly healing and transforming the quality of your communication. It is important to realize that we each need to man the dashboard of our consciousness and become intimately aware of how we are wired based on past experiences or else it all runs on autopilot and runs amuck as in the example above.

If your partner is not willing to do this together, don't let that stop you from pursuing your own inner work. He or she simply might not be as convinced or ready as you are. Take the lead. Do your part to take ownership of your own baggage and discover how past hurts are creating current sensitivities. Once you start behaving differently - as in doing a different dance step - your partner will follow along eventually. When six people are fighting, no one is being heard.

If you would like to know more about me, and my work with couples on decoding their arguments, please visit my website or email me at judithjohnson@hvc.rr.com