Almost 1 million people swarmed the National Mall in Washington DC on Veterans Day for the Concert for Valor. The weather was a perfect 70 degrees. The artist lineup was a once-in-a-lifetime event. And it was the perfect place to pull a social experiment I've been thinking about for a few months now.

We have been engaged in Afghanistan longer than any conflict in American history. Over 13 years. It has cost the lives of over 2,000 U.S. service members and over 21,000 Afghan civilians. And, on Veterans Day, when we honor those who have fought for our country, I was curious to know if Americans could locate the place our service members have been the longest. I definitely went into this with low expectations and I did expect to get some strange reactions/questions.

So, my cousin and I went around and made this video happen. I decided it would be important to write about the experience as well because the four-minute video doesn't cover some of the most memorable moments.

Side note: I've always had this problem with writing, cutting news packages... and now YouTube videos -- I can't keep things short. I hate taking away from the story and experience. Too bad our generation has the attention span of 140-characters. I know if you made it this far into this post, you can probably relate. (Yay, us!)

Anyway! One of the first people we went up to was a woman from Cameroon. Hella decked out in U-S-A attire. She definitely didn't mess around when it came to her love for our country. She got her citizenship recently. But when I asked her to point out Afghanistan on a map, she looked at me and sternly told me she didn't want to try. 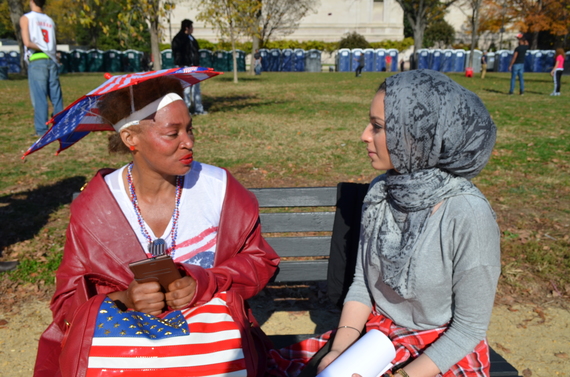 Moving on, we came across a lovely family. Dad and all the kids had fiery red hair, and spoke proudly of the veterans in the family. When asked to point out Afghanistan on a map, Dad pointed to Brazil. He was stumped. But his teenage son came to the rescue with an educated guess, and pointed to the Southeast Asia area once he remembered one of his video games.

One of my favorite parts of doing this was meeting how passionate and patriotic immigrants were. The only guy who said "no problem!" when I asked if he could point out Afghanistan, was a Chinese immigrant wearing an American flag bandana around his head.

But I have to say, the passion in the crowd was something else.

Whether it was one of the "Code Pink" leaders who was protesting war, insisting Veterans Day should go back to its roots of celebrating peacekeepers. Or if it was the Virginia woman I spoke to who said she could barely contain her anger of seeing a group of people sitting on an American flag.

I was a bit nervous approaching actual veterans and service members in uniform. The first service member I met was a small, Asian woman who serves as a dentist. She was with a friend who served in South America seizing drugs from cartels. The dentist said something that really stuck with me.

"People should ask us what our contribution in the military is, instead of just thanking us for our service." She insisted it's important for people to be aware of what is going on and actually care about the service members contributions, because otherwise, what are you thanking them for?

I was definitely surprised at how many people thought Afghanistan was located in Africa. A few of those people were veterans. One of whom started cracking jokes as soon as I approached him. When I asked him if he thought most Americans could point out Afghanistan on a map, he replied, "They would if they saw you." 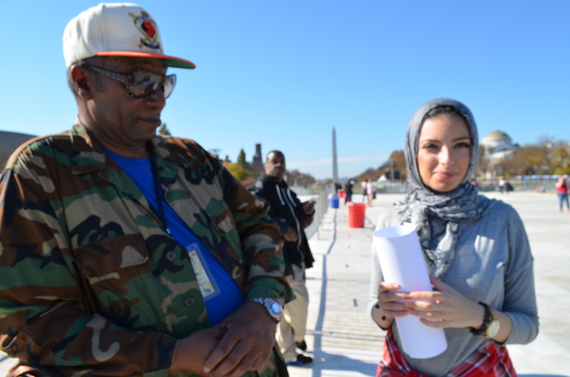 We interviewed over twenty people, and this was one of the easiest people-on-the-street stories I've done. Whenever I do these stories for work, it is so hard getting only three people to answer a question or two on camera! But, with this topic, people were willing and chatty.