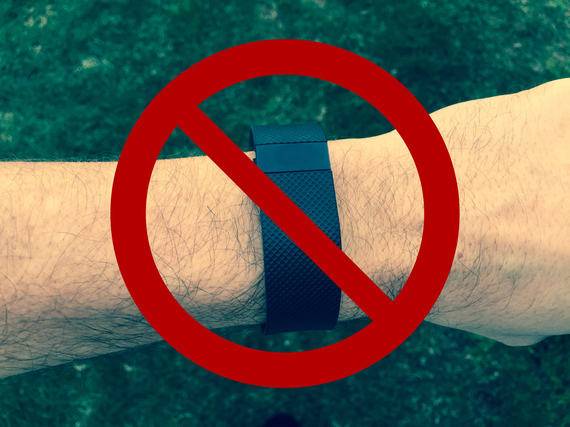 Are you FitBitten? Is that little device on your wrist ruining your life?

Answer the following questions honestly to find out.

Have you ever gotten out of bed at night because someone passed you in a daily challenge and you march in place until you retake the lead?

Is there someone you've always gotten along with, someone that you think is perfectly delightful, but now that they keep beating you at weekly FitBit challenges you detest them with a white hot fury usually reserved for serial killers, despots and mimes?

Have you ever panicked twenty minutes after taking a shower because you realized you forgot to put your FitBit back on? (also known as a FitBit conniption.)

Do you ever post selfies of you walking with your FitBit? A screencap of your your accomplishments page? Or endless humblebrags about how you only hit 150% of your goal steps for the day?

If you answered yes to any of these questions, you need help. You need to hit pause on your life, take that silly thing off your wrist and get some air. Go for a walk. That's right, you heard me, go for a walk and don't worry about your step count. Just walk.

Golf has been called a good walk spoiled. I think it's safe to say that FitBit has essentially spoiled all walks. Forever. Period.

I know. I know because I'm a bit like you. A FitBit addict. Driven by daily totals and obsessed with step counts. I haven't delved to the depths described above, yet. Hopefully I won't, but lately I've become quite obsessed with this little gizmo that tracks my steps. Not just tracks them...RECORDS them. Storing them forever so I now have them as part of that thing they always threatened me with back in grade school -- "my permanent record".

I started using my first FitBit two years ago when, after six years of being a work-from-home/stay-at-home dad, I realized I'd gotten twenty pounds overweight. Running had always been my activity of choice, but now that I was carrying all of that extra weight, I figured I should ease into it and start walking. Every day I walked, but it wasn't very satisfying. I felt old. The FitBit was a way to keep track of my progress, which I hoped would motivate me. It still felt like a bit of a defeat. In my younger years, I'd run marathons, scaled mountains, climbed rock walls...now I was literally counting my steps like a track-suited mall walker. But it worked!

I got addicted to those FitBit results. I wasn't even competing with anybody back then, I was just focused on beating my own numbers. Then, after four or five months, the relationship soured. Maybe soured is too strong of a term. My FitBit and I just slowly drifted apart. The long walks had helped get me back into better shape, but I found myself getting restless. I started running again. I became committed to REALLY getting back into shape. That led to me joining CrossFit. (I can already hear what you're saying, "Is there a fitness craze this jackass hasn't been addicted to? FitBit, CrossFit, what's next Zumba? TaeBo? Jazzercize?" )

Anyhoo, falling in love with CrossFit totally broke my dependence on my FitBit. It went into a drawer never to be seen again. Until two months ago. While throwing the football with my son I injured my shoulder. After a year of CrossFit classes, running road races, Tough Mudders and the like, AND dropping back down to my goal weight...I was felled throwing a twelve yard out pattern to an 8-year-old. The doc said I had a shoulder impingement doohickey blahblahblah, which meant a month or two of physical therapy. More importantly it meant no lifting, which got me out of my CrossFit routine. I didn't want to start packing on the pounds again, so I dusted off the old FitBit and got back to walking.

A lot more folks have FitBits now, including a whole gaggle of them at my gym, so I was invited to participate in various FitBit challenges that let you compete in real time against other FitBitters. I beat everyone that first week, surprising my fellow CrossFitters since they mostly saw me as the comically weak and inflexible old guy in their midst. And they weren't wrong...everyone in there had been doing those Olympic lifts way longer than the year I'd been at it. But walking? I've been excelling at that shit for DECADES. I noticed during Week 2 that everyone upped their game a little bit, but I still beat them. Score another one for the old guy!

This is where we get to the part about a FitBit intervention. Not for me, but for some of my competitors. My CrossFit peeps, my old school buddies, random colleagues, most of whom saw me as an easy mark. An older lazy guy that they could beat without much trouble. These people can't figure out how I keep beating them. Some of these folks are CRAAAZY. I've been accused of putting the FitBit on my dog and letting her loose. They've asked me if I hacked the software. They send me memes of how people are dancing or bouncing or fudging their way to higher FitBit steps and ask which one I'm doing. One competitor demanded an explanation on how I somehow passed her in a daily challenge when she had the lead at 11pm and she knew I always went to sleep before that. While, it's slightly creepy that she figured out when I went to sleep every night, the truth was that my son was sick that night so I was up a few times taking care of him and in running up and down the stairs for meds, etc. I somehow overtook her step count. How dare I?!

I have quickly made an army of FitBit enemies. People who liked me just a few weeks ago, now get enraged at the mere mention of my name. Folks still refuse to believe I'm not somehow gaming the system. I'm pretty sure a few of them want to take a lead pipe to my shins and Nancy Kerrigan me. I overheard one say I deserved a good hobbling. If you've ever had any of these thoughts, you are in desperate need of a FitBitervention.

How am I really beating them? What's my secret? I walk. Endlessly. I head out the door as soon as I roll out of bed, before the sun comes up, for a quick mind-clearing walk. I make it a point to walk wherever I can even though driving would be much easier. Returning a stack of kids books to the library two miles away? I walk. Picking up bagels? I walk...past two closer bagel stores...to the one almost three miles away. Annual trip to my urologist for my prostate exam the next town over? I walk (although the walk home was a bit more of a challenge.)

Since I have a "First to a Million Steps in 2016" bet with some folks, my FitBitting will continue to be an important part of my routine until at least the third or fourth week of February. At some point, my shoulder will feel better and I'll get back to a more rounded normal routine. Then my steps will dwindle, and I'll probably lose interest in my FitBit again. But for now, it is the excellent motivator I need to keep me active.

Now back to you. How did you do with your FitBit-less walk? It was okay, wasn't it? Do that more often. Stick with just the workweek challenges, that way you can take it off on weekends and just enjoy your life and not be constantly thinking of your steps. And if at any point you feel hatred towards another FitBitter or have dreams of taking a hammer to their patella, please step away from the fitness tracker. To paraphrase Sigmund Freud, "Sometimes a step is just a step."

US Presidential Election 2020
Breaking news, analysis and the latest polls on the presidential race from HuffPost’s politics team
See More
More:
healthy livingHealthwalkingFitness and Exercisefitbit
Newsletter Sign Up
The essential guide to taking care of your mind and body
Subscribe to HuffPost’s wellness email
Successfully Subscribed!
Wellness delivered to your inbox